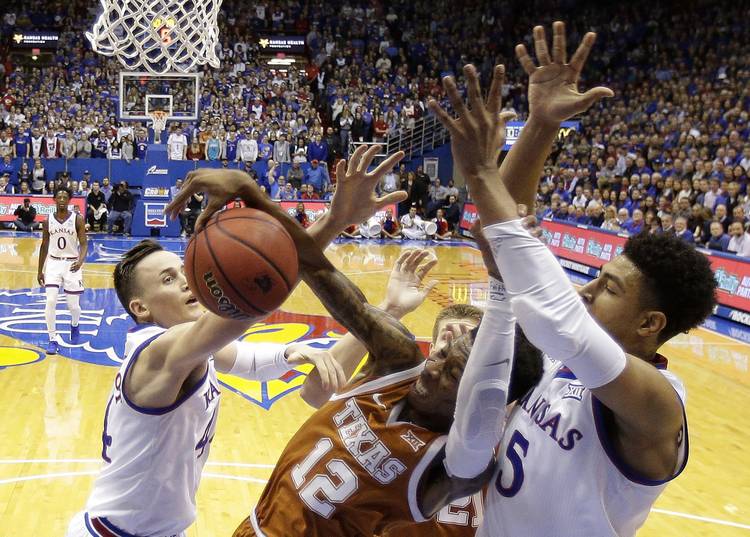 There’s one bankable fact about Shaka Smart’s basketball teams at Texas. His Longhorns don’t get blown out.

The close ones haven’t gone UT’s way, though.

Thirty-one games — more than one-fourth of Smart’s total — have been decided by one, two or three points. Under Smart, Texas is 13-18 in those situations.

“We definitely think we’re one of the best teams in the country. It’s just about showing it,” guard Jase Febres said. “You can talk all you want, but if you’re not producing, then it’s just talk.”

Smart is 60-57 overall at UT. The Longhorns (10-7, 2-3 Big 12) find themselves drifting back to .500 territory again this season mostly because of late-game execution. Courtney Ramey didn’t get a clean look at a game-tying 3-pointer against Oklahoma State, and Febres rushed a potential game-winning shot Monday at Kansas.

Six of UT’s seven losses, including these last three, have been decided by six points or fewer, essentially two possessions. In a 40-minute basketball game, that’s nothing.

So instead of being at or near the top of the Big 12 standings, the Horns are mired toward the bottom. Texas needs to get up big Saturday against No. 20 Oklahoma (13-4, 2-3) and not let off the gas.

“We’ve been talking about finishing games,” senior Dylan Osetkowski said. “I think the biggest thing is just continuing to realize that we’re right there. It’s just two or three possessions, little details throughout the game that we just really need to clean up, tighten up. I think once we do that, things will start to take care of things themselves.

Smart stressed the importance of finishing games all throughout the offseason, but it’s still a primary bugaboo. Last season, UT was 8-9 in games decided in the final minute or overtime.

“Talking about how to finish games, for sure, is something that is an emphasis,” Smart said Friday. “It will continue to be an emphasis. And that’s not necessarily just the last minute of the game. When a game is close throughout, each possession takes on unbelievable significance.”

End-of-game situations are when you sweat the details, stiffen up on defense and hit free throws. On Monday at Kansas, the game’s final play was emblematic of an inconsistent team.

Trailing by two, Smart wanted guard Matt Coleman III to penetrate the lane and either throw it back to Febres for a 3-pointer or find guard Kerwin Roach II in the right corner. Instead, Roach drifted up the floor to the wing because he thought the Jayhawks would press and Coleman would be in trouble. It clogged up the spacing. Febres had time to collect himself, but he rushed a shot that was off the mark with two seconds left. Texas lost 80-78.

“To be honest, I actually kind of messed up the play,” Roach said afterward in Lawrence. “It was supposed to be for Jase. When Jase shot it, I thought it was going to go in.”

Four days later, Smart said he didn’t want to call it finger-pointing, “but there was some accountability there.”

“I try to repeat myself in the timeouts just so the guys know this is what defense we’re in or this is what play we’re about to run,” Smart said. “The thing I’ve learned in coaching, the more simple the better. … But at the same time, if you execute the play the right way, I think we would’ve gotten an open three.”

Chalk it up as a hard learning lesson. Now the Horns must move on.

Oklahoma is coming off a surprising 74-61 home loss to Kansas State. Smart is 3-0 against OU coach Lon Kruger in Austin even with superstars Buddy Hield and Trae Young in tow.

The six Texas-OU games over the last three years were decided by an average of 6.2 points each. Again, essentially two possessions.

If Saturday boils down to a one-possession finish, it’s unclear how things will pan out for those in burnt orange.

“Come game time, it’s easy to let little things slip up,” Osetkowski said. “Being low, getting in your stance. Have high hands on a close out, not letting someone get an open three. It’s a small area of growth we can take to really make that next jump to becoming one of the better defensive teams in the conference and in the country.”

The Dotted Line: Texas is expected to host next batch of 2020 prospects this weekend

With former players in the house, Texas women hope to regroup after rare Big 12 loss