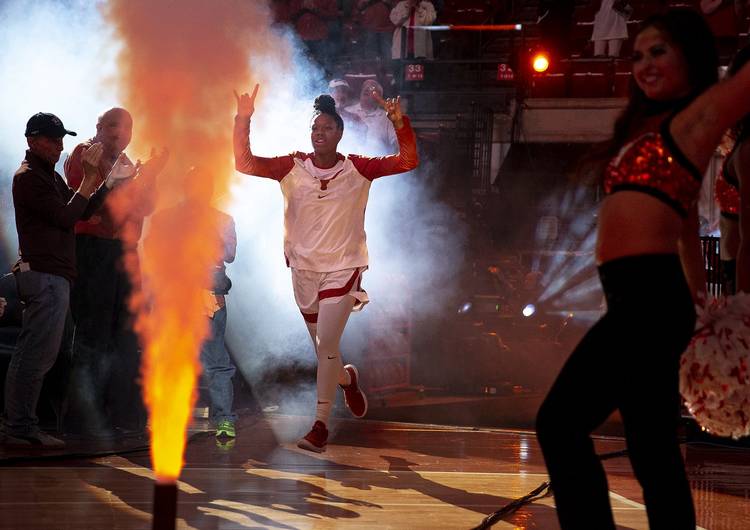 Texas guard Sug Sutton has been the team leader in points and assists this fall. [NICK WAGNER/AMERICAN-STATESMAN]

When the Longhorns take the court for a women’s basketball game against TCU on Saturday, a big piece of Texas legacy will be on their side.

This is an important game for the current Longhorns (14-3, 4-1 Big 12), who are eager to shake off the sting of a loss at Kansas State on Wednesday. A victory over the Horned Frogs would go a long way in getting them back on track in the Big 12 race.

The importance of the day, though, is bigger than a single game, UT coach Karen Aston said.

This will be Conradt’s first Texas Exes game without her mother, Ann, who died last fall at age 97. A fixture at UT games for 31 years, Ann Conradt developed special bonds with most of the former players who will be honored on Saturday.

“This is a special year (for the Texas Exes game),” Aston said. “Having them back sharing stories. For coach to have lost her mom this season, they can spend time and embrace her a little. That will be special, and we’re representing them on the court as well. We’re playing for something way bigger than ourselves.”

Texas had earned impressive road victories over West Virginia and Iowa State before the 87-69 loss in Manhattan. Aston said the players did some “soul searching” in the aftermath, but gave Kansas State credit for playing an outstanding game.

On a positive note, point guard Sug Sutton continued her impressive offensive streak, contributing 22 points and seven assists in defeat. She has shot 50 percent or better from the field in six straight games. She has made 41 of her 68 shots (60 percent) during that streak.

Aston said she has encouraged Sutton to keep shooting because she is “taking good shots.” The only negative in Sutton’s game is persistent turnovers. She has 22 over the last six games.

The game will mark a homecoming for two visiting players — TCU senior center Jordan Moore and junior guard Kianna Ray. Moore, a Stony Point graduate, leads the Horned Frogs in scoring and rebounding while Ray, from Bowie, leads in assists, steals and 3-pointers made.

Aston, who said she recruited both players, praised them because both have elevated their games after leaving high school. In Wednesday’s 78-70 victory over Texas Tech, Ray pumped in a career-high 24 points.