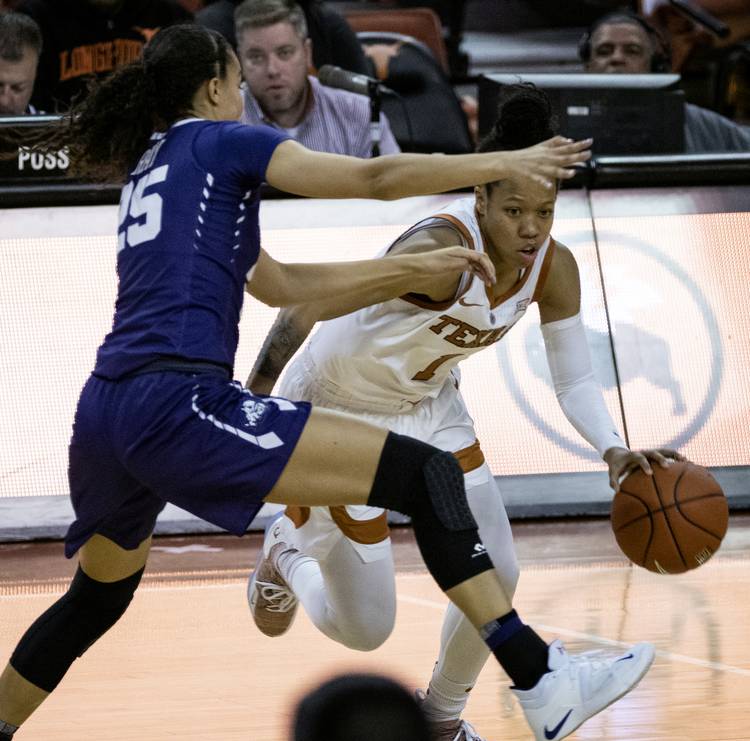 Sug Sutton went face-to-face with pressure and calmly knocked down four free throws in the final eight seconds of Saturday’s game against TCU.

Sutton’s ice-in-the-blood performance — combined with strong inside play from Joyner Holmes and Charli Collier — helped the 11th-ranked Longhorns escape with a 73-67 victory over TCU in a Big 12 basketball game at the Erwin Center.

UT coach Karen Aston said she was proud of her team’s resilience when it mattered most. After TCU, which trailed by as many as 15 points in the second half, cut the lead to 62-61 with 2:48 to play, the Horns responded with an 11-6 scoring run to close the deal.

“This is an area where we’ve grown a lot in this year,” Aston said. “If you’ve followed us in previous years, there were times we were not very good down the stretch in games. It’s the lapses we have in the middle of games where we should be putting teams away.”

Aston and Sutton each shouldered blame for a handful of blown fourth-quarter leads this season. On Saturday, the Longhorns rushed to a 53-38 lead on a 3-point shot by transfer guard Danni Williams with 2:15 remaining in the third.

Give the Horned Frogs credit for not croaking. They seemed energized when guard Yummy Morris drove the length of the court and scored a layup at the buzzer to end the third quarter. UT’s lead had been sliced to 55-46.

The Frogs, though, failed to hit critical shots in the final 90 seconds when the game was up for grabs.

“We’re disappointed but not discouraged,” TCU coach Raegan Pebley said. “That shows some growth with this team.”

After a slow start, Texas used a 19-2 scoring run at the end of the second quarter and beginning of the third to establish control. Holmes scored a season-high 17 points and Collier had 14 in one of her best overall games of the season.

Williams, who leads the team in 3-pointers, had 15 points, including three buckets from behind the arc.

That’s what baffles Aston and Sutton. Despite their obvious talents, they have developed a knack for taking big leads and scrambling at the end to preserve a victory.

“What we’ve come to realize is that we’re a roller-coaster team,” Sutton said. “We play well in spurts, and then we’ll have some mental lapses.”

Texas improved its series advantage over TCU to 42-3.

The Longhorns will return to Big 12 action against Kansas at 7 p.m. Wednesday at the Erwin Center.

Notes: Before the game Sutton received the Judy Dunn Award during a ceremony at midcourt. The honor goes to a player who aspires to teach, coach and make a difference in the lives of young people. … Destiny Littleton chipped in 11 points. It was the 16th time in 18 games this season that at least three Longhorns have scored in double figures.

With former players in the house, Texas women hope to regroup after rare Big 12 loss