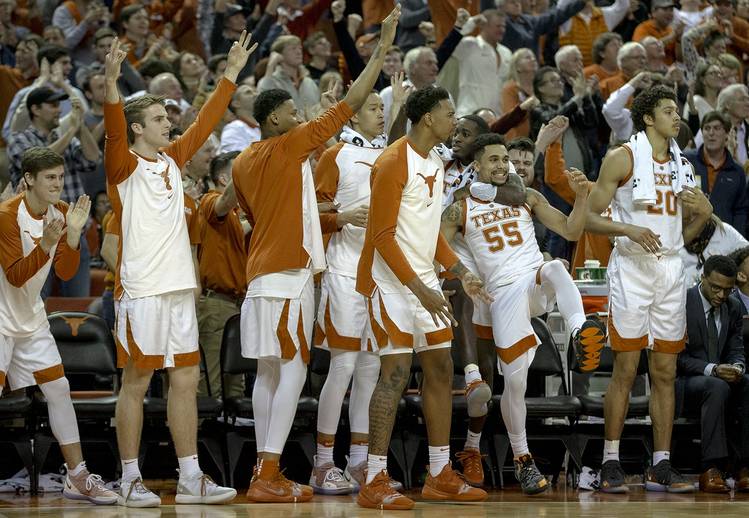 This time, it was the opposing coach who was exasperated in the post-game press conference, not Texas’ Shaka Smart.

“Really hard fought game,” Oklahoma’s Lon Kruger said. “They made a couple of plays down the stretch that they needed to have that made a little bit of a difference.”

Late-game execution ruined Texas’ chance to beat Kansas last Monday. But on Saturday, it was near-flawless execution down the stretch that led to a 75-72 win over the 20th-ranked Sooners.

Matt Coleman III penetrated, drew defenders and then he fired a bullet pass to Jase Febres for a wide-open 3-pointer. Kerwin Roach II refused to panic over OU’s pressure defense during an inbound play and smartly called timeout.

Coleman and Jaxson Hayes both hit free throws, and it was strong close-out defense on two last-gasp OU 3-pointers that sealed it. This was winning basketball as the Longhorns (11-7, 3-3 Big 12) snapped their three-game losing skid. Smart improved to 4-0 over OU at the Erwin Center, too.

“We’ve been going over a lot of situational things late in games, taking time in practice to go over that,” UT senior Dylan Osetkowski said. “Give us kudos of being able to go out there and do it.”

Indeed. After a wild Saturday around the league, Texas is now one game back in the Big 12 standings. Every team has at least two conference losses. The team that wins this thing will be the one that doesn’t panic late and, as Smart repeats ad infinitum, does all the things that go into winning.

“But man, just keep going back to the word toughness.”

Roach came out guns blazing and probably sought atonement for how the Kansas game finished. He “messed up” the final play where Febres took a tough 3-pointer at the buzzer. So against OU, Roach got going with back-to-back 3-pointers and another jumper in the lane.

He almost didn’t play after falling hard in practice on Thursday. Roach suffered an ankle injury that slowed him down in practice, but you couldn’t tell when the lights came on.

“It’s definitely a game to get back on track,” Roach said. “When you’re facing a three-game losing streak, any time is an atonement game.”

Roach finished with a game-high 23 points on 9-of-16 shooting. Osetkowski had 15 points and 11 rebounds in one of his best games of the season. Coleman had 15 points and six rebounds. Hayes was 4-for-4 from the floor and 7-for-8 from the free-throw line to tally up 15 points.

Christian James had a team-high 20 points for the Sooners (13-5, 2-4). Aaron Calixte and Kristian Doolittle both had a chance to tie it up in the final seconds. But both 3-point attempts fell short. A crowd of 11,991 went wild.

With this type of effort, anything is possible.

“I’ll say this, and every one of you needs to write this down,” Osetkowski said. “It was great to finally play a game tonight with the crowd like that. We used the crowd’s momentum tremendously, and we just want to thank the fans tonight. We need your support night in and night out in the Big 12.”

Texas officials did their best to give the home team a clear advantage. Football coach Tom Herman and some of his players brought the Sugar Bowl trophy out to center court at halftime.

Quarterback Sam Ehlinger was shown on the video board. He was holding the Golden Hat trophy from the October win over OU and said, “Get on your feet. Let’s go.”

The so-called “Minister of Culture” made his first appearance on the UT sideline, something definitely out of the norm.

Matthew McConaughey called Smart earlier in the week and asked to come. Wearing a burnt-orange, three-piece suit, McConaughey sat on the end of the bench during the game and peeked into the huddle during timeouts.

“That was high level,” Smart said of McConaughey’s threads. “I would love to get one of those. He said he got it overseas. He’s got some connections I don’t have.”

McConaughey gave the pre-game speech. And in a video clip that soon went viral, Longhorn Network cameras caught McConaughey instructing freshman Kamaka Hepa to get off the bench and cheer.

When Matthew McConaughey tells you to stand up, you stand up pic.twitter.com/3JQlugDS6E

“Kept the mood light for sure,” Osetkowski said. “He dared us to be who we are tonight. He dared us to play for each other tonight for 40 minutes.”

McConaughey should dare the Longhorns to actually look at the Big 12 standings. A Texas squad that’s now 3-3 could easily be 5-1 or 4-2 and sitting near the top.

Alas, nothing the Horns can do about that now. All they can do is focus on what lies ahead.