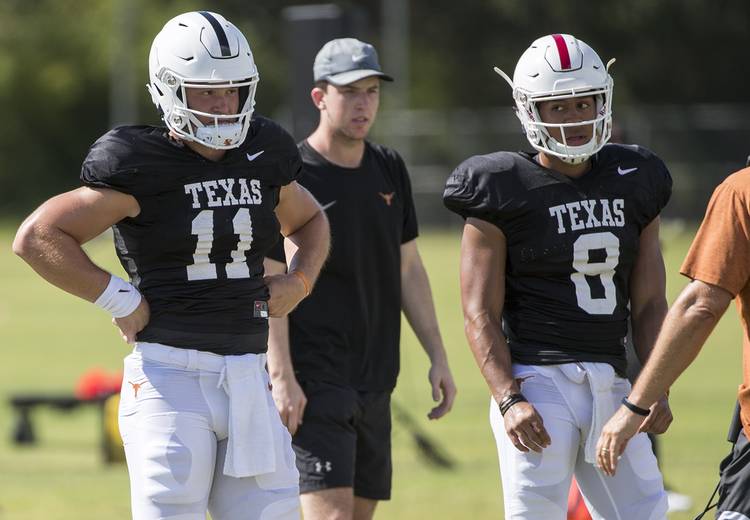 “In this day and age, to expect probably more than three (quarterbacks) on scholarship is going to be tough,” Herman said.

Speaking at halftime of the Texas men’s basketball game, Herman said backup quarterback Shane Buechele is still on the team and should attend Monday’s team meeting. Buechele has put his name into the transfer database and will explore leaving.

Herman and Buechele agreed to “play it by ear” as to whether the junior participates in spring drills. Buechele is on track to graduate this May and is likely to leave UT as a graduate transfer. SMU has always been one of the long-rumored destinations, but it’s too early to speculate on any potential landing spot.

“But I’m also hoping that he doesn’t have to make a decision until May, either,” Herman added. “We certainly want what’s best for him. Yeah, he’s part of our team.”

Freshman Casey Thompson has chosen to stay while fellow freshman Cameron Rising transferred to Utah. Both redshirted this season with the Longhorns.

“When he left New Orleans, I firmly believed (Rising) was just testing the waters and didn’t know what the waters would hold,” Herman said. “I don’t want to put words in his mouth, but that’s what we all believed.”

As for Thompson, Herman said the freshman did an excellent job running the scout team all last season and “the sky’s the limit” for him.

“He’s been great,” Herman said of Thompson. “He wanted to explore his options, and in this day and age, that’s his right. We respect that right of his. We obviously told him how much he meant to our program. I think at the end of the day, he’s making a great decision to come back and will continue to develop.”

Buechele, Rising and Thompson were all stacked behind returning starter Sam Ehlinger, who Herman said just had a steroid injection to help his ailing throwing shoulder injury.

Ehlinger did not require surgery, Herman said, and the junior-to-be should be ready for spring practice.

As for the offseason message, Herman said he’s going to stick with the same two themes from last offseason — develop and finish.

The entire coaching staff will return intact, so there won’t be any new faces. Herman’s keeping the status quo there, too, after the Longhorns went 10-4, reached the Big 12 championship game and defeated No. 5 Georgia in the Sugar Bowl. It was Texas’ first 10-win season since 2009.

“Do what we did last year, but do it a little bit better and a little more of it and a little bit harder,” Herman said. “Our two themes were develop and finish, and usually in my years as a head coach, we’ve changed them every year.

“This year, we’re going to have the same two words that we’re going to focus on,” he said. “We’re going to be so young that we have to develop those guys, and we still didn’t quite finish every game and our ultimate goals, too.”