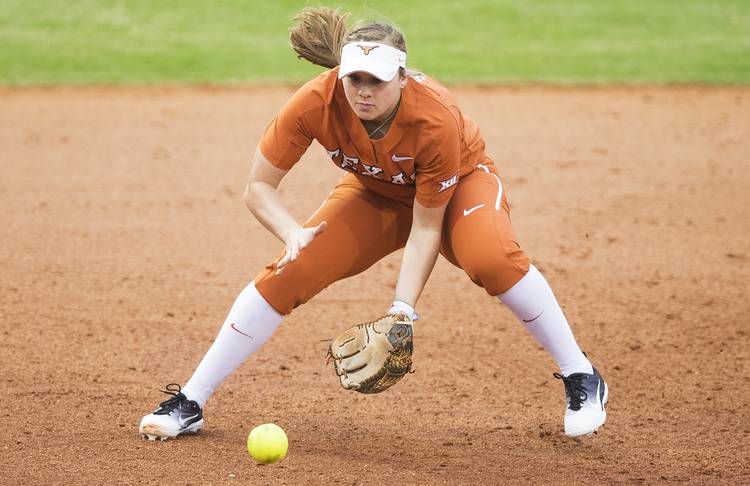 Following a practice that was open to the public on Monday afternoon, players and coaches from the Texas softball team were asked to speak to the fans and share a fun fact about themselves.

Sophomore infielder Janae Jefferson, for example, told those in attendance that she dislikes chocolate cake. Lauren Burke has a pet horse back home in Oregon and Tuesday DerMargosian proved that she can imitate a dolphin. Senior pitcher Brooke Bolinger announced that she got engaged over the holiday break.

Those tidbits, though, don’t have much to do with the product that Texas will put on the field. But sophomore MK Tedder came through with a relevant nugget of information. One season after she started 59 times at third base, Tedder introduced herself on Monday as an outfielder.

Defensive versatility, it appears, is a must for the Longhorns in Mike White’s first year at the head coach. Newcomer Shannon Rhodes described herself to UT’s fans as a utility player. Kaitlyn Washington identified first as a first baseman instead of an outfielder who earned all-conference honors in 2018.

Last year, Texas ranked 12th among the NCAA’s 296 Division I teams with its .976 fielding percentage. The Longhorns, however, also hit .268 (144th) and scored 3.46 runs per game (227th). White said upon his hire that UT’s offensive numbers had to improve, and he reiterated this week that he wants his best bats in the line-up. As junior Malory Schattle observed, “(Who plays) basically depends on who’s really hitting well that day.”

“I’ve already told them that I’m about offense,” said White, whose Oregon team scored 6.11 runs per game last year. “I want to have a good offense out there to start the game. Later in the game, we may go to more of a defensive-type line-up. But I want to get ahead.”

Versatile players will give White more options and flexibility as he attempts to stack his batting order. So, that explains why Washington may leave a crowded outfield while Schattle has transitioned from first base to third base. White said that Miranda Elish can possibly play first base when she isn’t pitching, and the team could experiment with catcher Mary Iakopo as an outfielder or corner infielder. Even Kaitlyn Slack, a shoo-in to be UT’s starting shortstop, was spotted practicing in the outfield.

“I think everyone’s having fun with it,” Schattle said. “They’re tying to figure out their perfect fit for the season. The coaches are really working with us well, wherever we end up.”

Texas returned 13 players from last year’s team, and the roster added five freshmen and four transfers from Oregon. White said he will use the non-conference portion of UT’s schedule — a six-week stretch of 32 games that begins with a home contest against Northwestern State on Feb. 8 — to figure out his line-up. Texas opens Big 12 play on March 22.