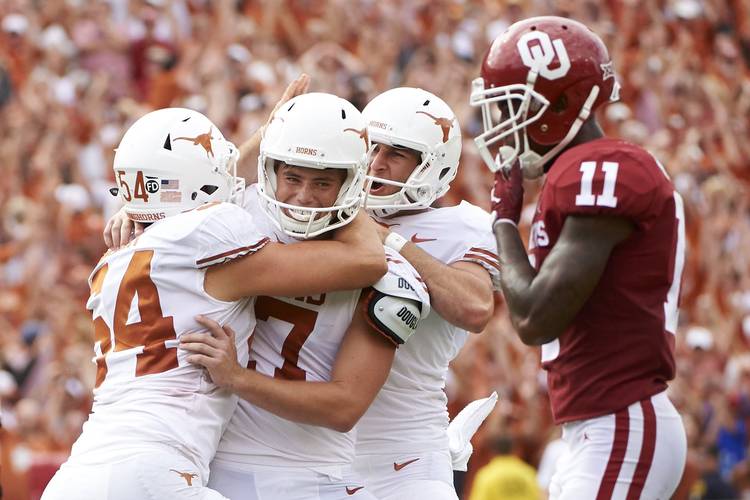 FILE - In this Oct. 6, 2018, file photo, Texas kicker Cameron Dicker (17) celebrates with teammates after kicking the game-winning field goal in the closing seconds of the second half of an NCAA college football game against Oklahoma at the Cotton Bowl in Dallas. The Texas-Oklahoma rivalry is never short on bad blood between the Big 12 border states (AP Photo/Cooper Neill, File

The reason: Rising has moved on to Utah after receiving no action as a freshman. The four-star from California committed to Texas in hopes of taking the starting job. Sam Ehlinger took a giant leap forward as a sophomore and has secured the job for the next two years barring injury. Rising saw the writing on the wall and explored a program with potential playing time.

The reason: Thompson took a redshirt season in 2018 and flirted with the possibility of transferring too. With the transfers of Shane Buechele and Rising, Thompson enters 2019 as the clear backup to Ehlinger.

The reason: Ingram contributed and showed flashes of potential all-conference talent when given touches. He was never asked to truly become the No. 1 back and there were times when he disappeared whether by design, injury or simple freshman fatigue.

He finished with 708 yards and three touchdowns on 142 carries, averaging five yards per carry. He added two touchdowns and 170 receiving yards on 27 catches. The former member of the Fabulous 55 enters his sophomore season as the clear favorite to start at running back.

The reason: The best is yet to come for Eagles, a former top-five prospect in Texas. The domination of Collin Johnson and Lil’Jordan Humphrey allowed few opportunities for the freshman to earn targets. His stat line for the season: Just one catch for 35 yards in 11 games. A uniform violation by Johnson actually allowed Eagles to start the season opener in an odd twist. He’ll be in the mix for snaps as a sophomore with Humphrey gone.

The reason: An injury interrupted Moore’s momentum. He’ll be asked to help replace the slot production of Humphrey in 2019. He played in six games before a shoulder injury sidelined him for the season. Moore caught seven passes for 53 yards, including an important touchdown in Texas’ win over USC.

The reason: Woodard took a redshirt in 2018.

The reason: Jamison made his splash when he returned a punt 90 yards for a touchdown against Kansas State, earning him Big 12 special teams player of the week honors. Jamison was thought to be a nickel back when he came out of Houston Lamar, and he could go back to defense with P.J. Locke III off to the NFL draft. Texas used Jamison in a variety ways on offense, but it was his special teams play and clear athleticism that the Longhorns are most excited about.

The reason: Epps benefited from the new redshirt rules allowing players to participate in up to four games without losing a year of eligibility. He played in wins over Texas Tech and Iowa State, registering one catch for 18 yards.

The reason: Dicker cemented his place in Texas lore with a game winner against Oklahoma. The freshman provided a competent kicking game for the Longhorns. That’s not something Herman had in his first season. He finished the year 18-of-25 with a long of 52. He also did well on kickoffs.

The reason: It’s hard to follow Michael Dickson, and expectations were probably too high for The Punter’s cousin. He became more consistent throughout the year, which was to be expected for a guy still new to competitive football. He averaged 40.3 yards per kick with a long of 56. Nine of his 56 punts were more than 50 yards and 18 pinned an opponent inside the 20.

The reason: Angilau took a redshirt in 2018.

The reason: Ghirmai took a redshirt in 2018.

The reason: An injury caused Grandy to quit football.