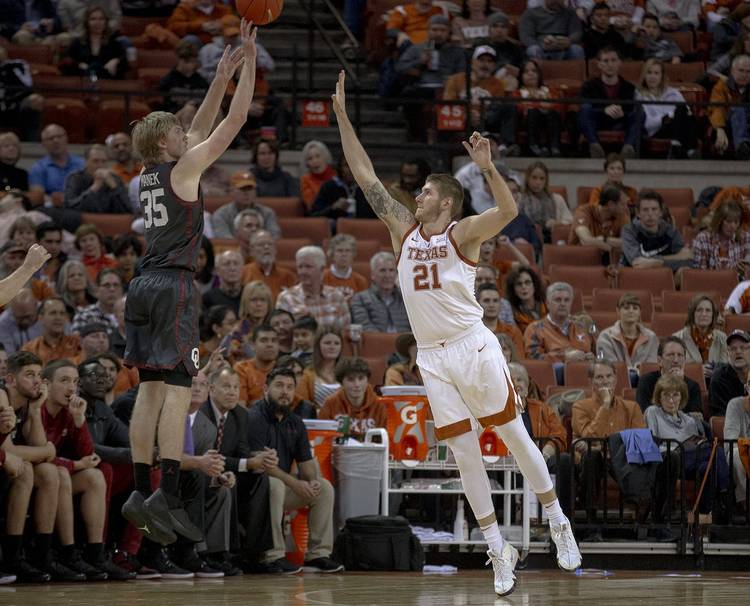 Texas coach Shaka Smart isn’t afraid of a smaller, guard-oriented lineup. But that group must reward his trust with better perimeter defense.

Forget putting your Horns up. Texas’ defenders need to get their hands up.

“We have to contest 3-point shots better,” Smart said. “There’s been some tough shots that guys have made. But then there’s been others where we can’t be surprised that they rise up and shoot from 25 feet.”

Oklahoma State was 8-for-19 from 3-point range to beat Texas. Then Texas Tech hit seven threes to escape Austin with a win. Kansas was a dazzling 11-for-22 and only won by two.

Oklahoma was 7-for-17 last Saturday at the Erwin Center while Texas went 5-for-22 from long range. The Sooners got two last-gasp looks at 3-point shots that could have swung the game in their favor. Fortunately for the home team, both missed.

“We’ve got to have higher hands,” Smart said. “We’ve got to keep our hands up until the guy decides to put the basketball on the floor.”

Guarding the 3-point line has been a simmering issue most of the year. Texas has one of the league’s better defensive units. Opponents are hitting 40.5 percent of their shots against the Horns, the third-lowest total in the Big 12. Some of the credit goes to freshman forward Jaxson Hayes, who leads the Big 12 in blocks per game. Whether it was Cam Ridley, Prince Ibeh, Jarrett Allen or Mo Bamba, Texas has always been able to protect the rim.

But this season, opponents are also sinking 34 percent of their 3-point shots, the third-highest figure in the league. To some coaches nowadays, the 3-point shot is more important from an analytical point of view than a layup.

“Defending a three is a big deal,” Smart said. “When you go on the road, you have to make sure they earn everything they get. If they throw in a tough three, that’s what good teams and good players do.

“But we always tell our guys, they can’t make enough of the tough ones to beat you,” he added. “It’s always the ones that where you had a lapse or didn’t get a hand up. You’ve got to finish the possession.”

This will be a long week for the Horns. Tuesday was the first day of classes in the spring semester. They will be in Fort Worth all day Wednesday, back home for one day and then leave for Athens, Ga., on Friday.

Texas plays Georgia in the Big 12/SEC Challenge at 1 p.m. Saturday. Then, the Horns are back home for Tuesday’s return match with the Jayhawks.