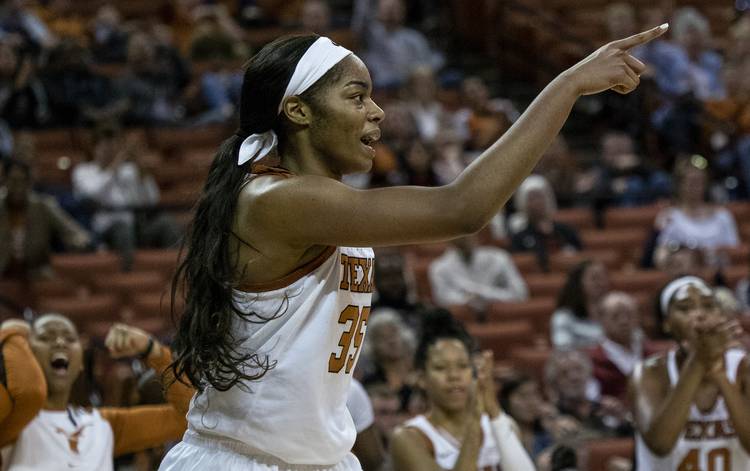 Texas freshman Charli Collier has made a key impact for the Longhorns coming off the bench. At times she has looked like she'll be Teas' next breakout star. [RODOLFO GONZALEZ/For American-Statesman]

Charli Collier’s college education extends beyond textbooks and the classes she takes daily.

Texas’ 6-5 freshman center was among the nation’s top prospects as a high school senior and now is taking a crash course in college basketball. And while much of her time has been spent watching her teammates from the bench, she has shown signs of becoming UT’s next breakout star.

Collier is coming off her finest game so far. In Saturday’s 73-67 victory over TCU, she scored 14 points, grabbed five rebounds and surprised the crowd by nailing a 3-point shot.

Coach Karen Aston said Collier is stronger than her slender frame might suggest. For now, she is learning from established vets Jatarie White and Joyner Holmes while waiting for her chance to shine.

“It’s more about learning to use her strength,” Aston said on the eve of Wednesday night’s Big 12 home game against Kansas. “Bending the knees more than she might have done in high school. Get a base. The base is in the paint. Outside the paint she has to use her length to her advantage. These are all new areas for her.”

Collier was a grown woman among girls at Barbers Hill High School near Houston. As a senior she averaged 31 points, 11.5 rebounds and 2.2 blocks and was the top-ranked player in the class of 2018 by Prospects Nation and Blue Star Report.

Luckily for Collier, she does not have to carry the Longhorns this year. She has shown glimpses of brilliance, averaging 6.6 points and 4.1 rebounds while playing 14 minutes per game.

Humble off the court, she gives credit to her teammates for putting her in position to be effective.

“I’m taking practice more seriously,” Collier said after her impressive performance against TCU. “That has helped me get into the flow of a game. I have to be ready to practice each and every day. What I’m trying to do is stay mentally and physically strong in practice so I can have games like this.”

Aston applauded the team’s inside presence during the TCU game. No one played any better than Holmes, who poured in a season-best 17 points while collecting four boards. She and White were part of a defense that limited TCU to 40 percent shooting from the floor.

Despite season-ending injuries to senior guard Lashann Higgs and 6-7 freshman Sedona Prince — combined with Holmes’ ankle surgery that cost her eight games — the Longhorns are in good standing, the coach said.

Aston also singled out junior point guard Sug Sutton for “carrying a heavy load” this season. Not only has Sutton taken over a leadership role vacated by former Longhorns stars Brooke McCarty and Ariel Atkins, but she has emerged as the leading scorer, averaging 12.3 points a game.

“We’re talented enough to be a great basketball team if they put everything into what they can do,” the coach said.

A healthy contribution from Collier will be necessary for the team to move forward.

“I said before the TCU game that I need to get her in there more,” Aston said. “Luckily, she had that opportunity on Saturday and produced.”

Horns up? No, get your hands up! Texas’ perimeter defense proving vulnerable