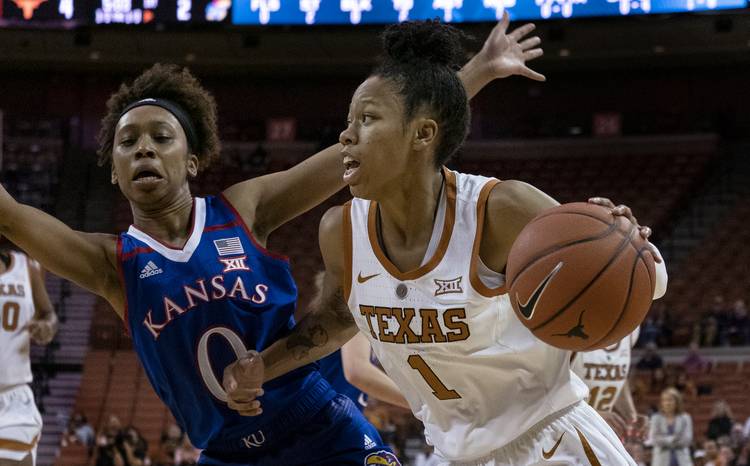 The product Texas put on the floor Wednesday night did not meet Karen Aston’s standards for Longhorn basketball.

This was not UT’s finest hour. It was so bad, at times, Aston was compelled to apologize to the crowd on her radio interview following the 62-43 victory over Kansas at the Erwin Center.

Aston and a few of her key players vowed they will put up a better showing when they take their act to Lubbock on Saturday for a conference game against Texas Tech.

By comparison, Kansas entered the night hitting 41.2 percent from the floor during the season, 36.7 percent behind the arc.

The Longhorns were lucky to play one of the conference’s bottom feeders. It would have been hard to imagine another Big 12 team losing to Texas when it was apparent early the Longhorns’ heads weren’t in the game.

“I do not have an explanation for the way we played,” Aston said. She said the team’s attention to detail was poor. The guard play was not up to par. Poor decisions were made. Giving up 18 offensive rebounds was inexcusable, too.

On the positive side, point guard Sug Sutton had a good shooting night, hitting 5 of her 7 shots from the field while finishing with a team-high 18 points. Forward Joyner Holmes shook off early foul trouble to finish with 15 points and 8 boards in just 18 minutes, and center Jatarie White contributed 10 points and 5 rebounds.

Kansas coach Brandon Schneider was not happy with his own team. He said the Jayhawks might have been more competitive if they had better aim on their shots.

“For the most part, we got the shots we wanted,” he said.

Despite KU’s dreadful offensive night, the game was closer than the Longhorns would hope for. Texas led 13-8 after one quarter, 25-16 at halftime and 46-32 after three quarters.

Give Texas credit, though, for holding the Jayhawks 26 points below their season average. Sutton, though, was blamed herself for part of UT’s offensive woes.

“We weren’t ourselves tonight,” the junior point guard said. “It started with me. I wasn’t reversing the ball. I was picking up my dribble when I wasn’t supposed to. Our tempo was really bad. Our guard play was pretty bad tonight.”

Texas Tech will provide a bigger challenge on Saturday.

“With the things that were said at halftime (by the coaches) and the things that have been said (after the game), we’re going to take this personally,” Holmes said. “We’ll get in the gym and work harder. We didn’t play our best game tonight and we know have to bring it on Saturday to beat Tech.”

This marked KU’s lowest point production of the season. Its previous low came during a 58-52 loss to Nebraska in December.

The next Texas home game will be Monday night against West Virginia.