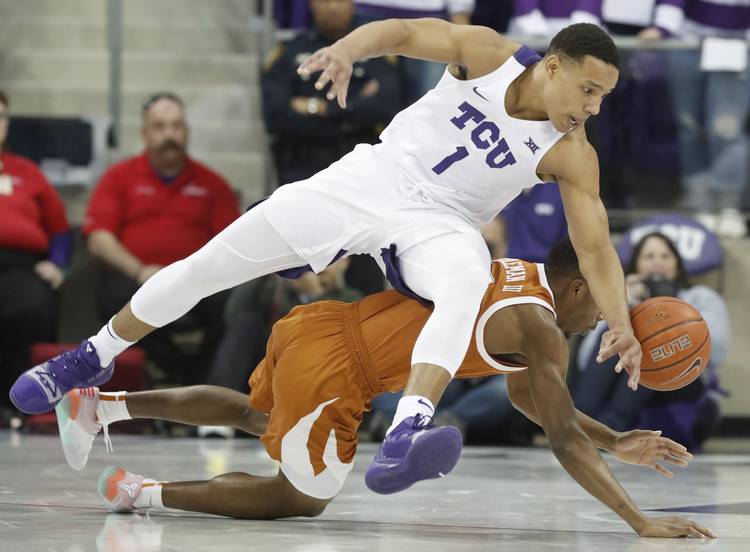 TCU guard Desmond Bane (1) and Texas guard Matt Coleman III (2) vie for control of the ball during the first half of an NCAA college basketball game in Fort Worth, Texas, Wednesday, Jan. 23, 2019. (AP Photo/LM Otero)

FORT WORTH — Kerwin Roach II verbalized all the right things after yet another disappointing loss on Wednesday. But it was his posture that spoke volumes.

His eyes looked downward. His shoulders slumped. It’s written all over his face. The Texas senior is tired of losing close, winnable games.

“I’m never happy after a loss,” Roach said. “Especially one where we lost by three.”

The final math indicates Texas lost by four points this time, although the 65-61 loss to TCU essentially came down to another missed 3-pointer late at Schollmaier Arena.

The Longhorns (11-8, 3-4 Big 12) got worked on the offensive glass, fell behind by 12, realized they were in trouble long after it was too late, mounted a furious charge and couldn’t get over the hump at the end. Sound familiar?

Whether it’s Oklahoma State, Kansas and now TCU, it all looks the same in the loss column.

Coach Shaka Smart, now in his fourth season, is 14-18 in games decided by three points or fewer. This was another game that could have gone either way, but TCU (14-4, 3-3) had terrific energy all night long and piled up 18 second-chance points. The Frogs were quick to point out on social media they now have four straight wins over the Horns in Fort Worth.

Desmond Bane had a game-high 17 points for the Frogs, who forced 17 turnovers and won the battle on the glass 42-33. Bane made one layup that was so outrageous, he accidentally smacked his head on the backboard.

“Just grazed it,” Bane said with a huge laugh. “I used to have a flattop on top. Luckily, those little curls I’ve got sitting on top of my head can scrape the backboard. But that was full head. That was not just hair.”

Meanwhile, Texas fans are pulling out their own.

When it comes to explaining close losses, Smart usually puts the onus back on the players. The coach said he was begging the Longhorns — “Just pleading with them,” he said — to bring more energy.

So what is the problem? How much of this is coaching? How much is it on the players? That’s something only Texas athletic director Chris Del Conte can accurately gauge.

“We knew this was a game we could grab and this was a game that was going to be close down the stretch,” Smart said. “We just didn’t have enough sparks — guys that go into the game that give us a spark — in terms of energy.”

Guard Matt Coleman III was physically on the floor, but at times it sure didn’t look like he was all there. The sophomore floor leader had four turnovers, three points and two assists in 27 minutes. Texas trailed 62-54 when Smart benched Coleman with 3:52 remaining.

“He just didn’t look like he had it tonight,” Smart said. “He looked really, really sluggish. Matt’s a guy, he’s going to try to find everything he has. But he just seemed tired and seemed like he didn’t have that next burst to him.”

How would it play if Texas football coach Tom Herman benched quarterback Sam Ehlinger for the game’s final drive because the athlete looked “really, really sluggish?” That’s effectively what Coleman is to the UT basketball team — the on-court quarterback.

Said Smart: “Those other guys were playing better and making more plays.”

Bane’s eye-popping layup and then another jumper made it an eight-point game. But UT’s Jase Febres answered with a bucket and then a 3-pointer from the top of the key, just like how he got hot in rapid-fire fashion against the Jayhawks.

Jaxson Hayes’ layup with 23 seconds left made it a one-possession game. Lat Mayen missed the front end of a one-and-one at the free-throw line, and Texas got the ball back with 12.1 seconds left.

The Frogs fouled twice to eat up some clock, leaving 6.6 seconds left for the Longhorns.

On UT’s final possession, Roach said the Horns “couldn’t get into our offense.” Febres wasn’t open, so guard Elijah Mitrou-Long took an ill-fated 3-point shot that hit the top of the backboard.

“Credit to TCU, they’re a good team,” Roach said. “All the ball screens, they pretty much downed, and they just much made it tough to create for somebody else on the pick-and-roll. They also did a good job staying with Jaxson (Hayes) making sure he didn’t get off. They’re just a good defensive team out there today.”

These Longhorns simply cannot handle success. Texas started 2-0 in league play and then looked past Oklahoma State. Courtney Ramey’s last-second shot was off the mark in Stillwater. The Horns played their tails off in Lawrence but botched the final play in another loss.

Texas beat Oklahoma in one of these close games last Saturday. But four days later, the players overall “didn’t have enough sparks” and the point guard got benched.

“It’s something that we talked a lot about coming into this game,” Smart said. “The OU game is a great win if we come and win this game. If we build on it.”

The Big 12 is down this season, so a .500 record in league play may not guarantee anyone a spot in the NCAA Tournament. Do these Horns understand they are frittering the season away?

“We talked a lot about it,” Smart said. “It’s something that they’ll be hit with again. I think on one level they do.”

Smart said the players have to “own what you have to do to win the game. And we didn’t do enough of that.”

“So if that’s an answer to your question,” Smart said, “we still have a ways to go with that.”