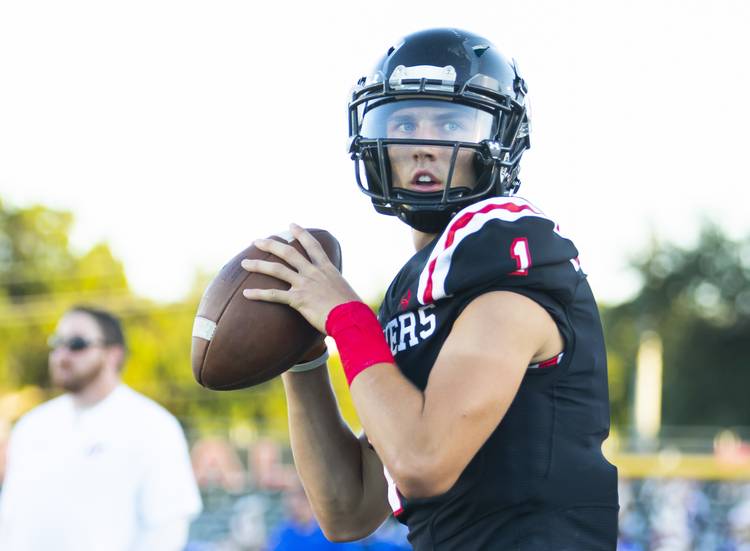 Texas hopes to add its third member to the 2020 recruiting class later today when three-star offensive tackle Jake Majors announces his college destination. The 6-4, 285-pound product from  Prosper holds 15 offers and was a second-team all-district selection as a junior. He’d join fellow offensive lineman Logan Parr and four-star quarterback Hudson Card as the first three UT pledges of the cycle.

Blessed and humbled to be in this position. pic.twitter.com/Kjpwcgovcy

The Longhorns are two weeks away from securing a second-straight top 10 class. The 2018 class ranked third in the nation and provided instant impact players like Caden Sterns, B.J. Foster and Keontay Ingram. The 2019 class includes nine early enrollees and currently ranks eighth.

A bulk of the attention is beyond the 2019 class unless JUCO prospects and potential grad transfers count. The top prep prospects in the country now use the early signing period in December, leaving little excitement heading into national signing day. Texas though will host Dodge City C.C. inside linebacker Lakia Henry the weekend before signing day and hopes to add him to an already impressive four-man linebacker class.

That makes a quick start to the 2020 class important. Oklahoma and Texas A&M beat the Longhorns to the recruiting punch in the 2019 class and it caused the Texas staff to venture out of state more than it’d like in a given cycle. The addition of Majors would give the Longhorns three Texans to build around for the next cycle. It also would help ease concerns surrounding the future of the quarterback and offensive line positions.

The addition of the 2018 and 2019 classes means the numbers in the 2020 class are small. It’ll be a cycle about quality instead of quality and it’s a great year in-state for talent at key positions like offensive and defensive line.

The 2020 Fabulous 55 will be released on Feb. 7. Card and Parr are top-30 prospects in the state. Majors also will make the initial list. The next steps include adding fellow big men like Jaylen Garth and Chad Lindberg on offense, and landing standout local defensive ends like Alfred Collins and Princely Umanmielen. Momentum matters and the early addition of Majors would attract other prospects to jump on board before the spots fill up.

“Cliques are a normal thing in recruiting now,” Lindberg said. “We all talk about what we want to do and how well we’d do if we all went to the same college. Why wouldn’t you want to go to school with guys you respect and can help you win football games?”

Maybe it’s the elite camps that allow these players to bond in the offseason despite not playing for the same teams in the fall. Maybe it’s social media and the ability to connect to other elite stars throughout the country. Maybe it’s the growing 7-on-7 market. Whatever it is allows these young recruits to know each other before stepping on campus. This means coaches must now recruit groups as much as individuals.

“I’m not going anywhere that doesn’t already have a bunch of dogs committed at offensive line,” said five-star running back Zach Evans. “I’m looking at the two classes before me and my class of big men. That’s just as important as the coaching staff and everything else. For my position, nothing matters more than the guys blocking for you. So yeah, I’m watching to see where the best big guys go before I make a final decision.”

That’s where the success for Texas in the 2018 season comes into focus. The early signing period and the ability for players to take official visits as juniors means that the elite prospects are picking schools in the spring and summer. Thirteen of Texas’ 22 commitments pledged before the start of their senior season. Eight of the current top 10 on the 2019 Fab 55 were off the market by June.

“We start meeting coaches and going to campuses as freshmen and sophomores now. We all kind of know which schools we favor if the offers are there,” said Garrett Wilson, a five-star wide receiver from Lake Travis who picked Ohio State over Texas in April of his junior season. “It becomes about getting the decision public and then helping that school recruit. The earlier you commit, the earlier you can kind of be an ambassador for the guys you want to join you.”

The Longhorns weren’t quick to compile commitments in 2019. Roschon Johnson committed way back in 2017, but the second member of the class didn’t pledge until last Feb. 28 when T’Vondre Sweat joined the fold. Texas held four commitments going into May of last year. The 2020 class could consist of three members by the time the 2019 class becomes official.

It is another example of Tom Herman calling the right recruiting audible. Instead of settling for lesser in-state talent when 2019 stars like Demarvin Leal and Wilson chose elsewhere, Herman explored outside of the borders.

The audible in 2020 was to push for commitments earlier. Texas can reap those benefits today if Majors decides to call Austin home.