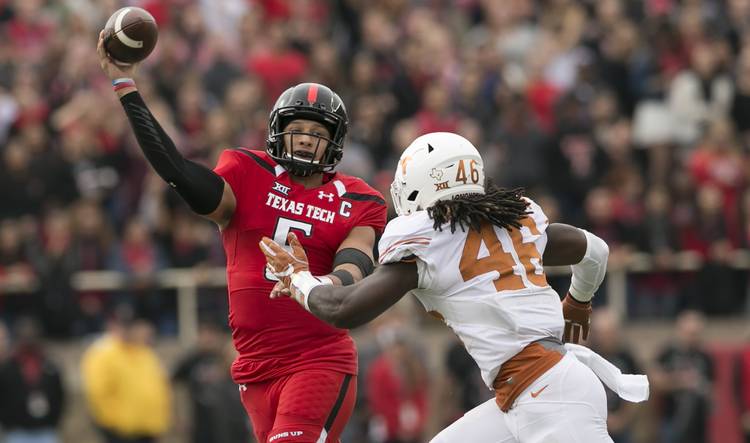 This recruit was so important to his program that Kevin Sumlin, then the coach at Texas A&M, borrowed a maroon helicopter from a booster so he could drop in for a high school football game.

Back in September 2013, Sumlin didn’t have time to waste. He was preparing his team for a home date against top-ranked Alabama.

But he needed to get to Arlington to make a recruiting pitch to Myles Garrett, the extroverted sack specialist who was the consensus choice as the top prospect in the state and one of the most coveted recruits in the country.

Advertisement
The legend of Sumlin’s “Swagcopter” was born that early fall evening, an attention-drawing device that showed special recruits just how much they were desired. Garrett committed to the Aggies within the month.

“That was awesome,” Garrett said when he committed. “That was a show of respect that they recognize me as a pretty good player in the state of Texas. … I was like, ‘Wow, I guess I have to play my butt off.'”

Garrett was the top player on the Austin American-Statesman’s 2014 Fabulous 55. He certainly was special as a three-year starter for A&M. The Cleveland Browns selected him with the top pick of the 2017 NFL draft. This Sunday, Garrett will play in his first Pro Bowl.

Even the most obsessively optimistic recruiting fans know prospects can be boom or bust. Today’s blue chip is shiny and new and full of expectations. Five years from now, however, that might not be the case. Injuries, a bout of homesickness, a coaching change, grades — they all can rub away the luster of a blue chip.

For the past 30 years, the Statesman has ranked the best 55 prospects in the state. A quarterback may lead the way one year, a receiver could be the best the next.

Five years later, in the days leading up to national signing day, we have re-grade the class.

The elite of that 2014 class stayed elite. Three of the top four recruits — Garrett, defensive end Solomon Thomas (Stanford) and safety Jamal Adams (LSU) — were among the first six players taken in the 2017 draft. The rest of the class was a mixed bag.

Sumlin was in his first full season as A&M’s head coach. He collected the signatures of 11 members of the Fab 55. Within five years, six of those had left the program. So had Sumlin. He was fired in November 2017.

Texas was in a state of flux. Mack Brown, one of the best recruiters in the country, was pushed out as head coach in December 2013. Charlie Strong was hired from Louisville a month before signing day. Led by quarterback Jerrod Heard, who ranked ninth, the Longhorns signed eight players off the Fab 55.

The Longhorns’ class sported 23 players from five states. Nationally, Texas’ class was ranked 17th. For context, the last time UT signed a class of at least 20 players that wasn’t ranked in the nation’s top 10 was back in 2001. And that class ranked 11th, serving as a catalyst for the Longhorns first-ever BCS invite.

The coaching change crippled Strong in recruiting. Most of the commitments already had made their one official visit when Brown was the coach. Still, on national signing day, Strong told reporters: “We are the University of Texas and this is the state of Texas, so when we walk in, the door is going to be open for us.”

Strong enticed two of his commitments from Louisville to follow him to Texas. Defensive tackle Poona Ford, who was from South Carolina, was the Big 12’s defensive lineman of the year in 2017. Defensive tackle Chris Nelson, who grew up in Florida, was a team captain this past season and enchanted fans with his “belly rub” celebration.

There was a star hidden among the lesser-known names. The Longhorns signed Texas City twins Armanti and D’Onta Foreman. Armanti, a receiver, was the four-star prospect. D’Onta, the tailback, was ranked as the 135th best player in the state.

Yet D’onta won the Doak Walker Award as the country’s top tailback in 2016. He gained 2,018 yards, only the second Longhorn to rush for 2,000 in a season. Ricky Williams was the first, when he won the Heisman in 1998. Foreman averaged 184.36 yards per game that season, the best in the country. He left school early and was selected by Houston in the third round of the 2017 draft.

Foreman wasn’t the only national award winner from the state who failed to create much of a recruiting ripple in 2014.

Oklahoma State’s James Washington, who starred for Class A Stamford, won the Biletnikoff as the nation’s top receiver in 2017. Playing for such a small school, no one knew much about him. TCU offered a scholarship. A Longhorns coach visited him. That was about it, although Washington generated huge stats in the 2013 state championship game. He caught four passes for 144 yards and returned an interception 77 yards for a touchdown. He was a second-round pick of Pittsburgh a year ago.

And after Garrett, the second-best player the state produced that year also didn’t make the Fab 55.

That’s Patrick Mahomes, who was first-team All Pro in 2018 as he led the Kansas City Chiefs to the AFC championship game. Mahomes dazzled at Whitehouse High School. His final game there, he threw for 597 yards. He committed to Texas Tech in April 2013. He had an offer from Rice. He made unofficial trips to Texas, Texas A&M, Baylor and LSU.

In Lubbock, he earned the starting job in the final month of his freshman season. By his junior year, Mahomes led the nation in all major passing categories. He left for the pros in 2017 and was the 10th pick of the draft.

Mahomes shows how recruiting can be so hit or miss.

Garrett deserved all the recruiting attention. He was a unanimous All-American by his junior year. Sumlin sent the maroon copter and landed the highest-rated defensive signee in school history.

Mahomes was a prized signee at Tech, but his commitment made no national news. No Swagcopter landed in his hometown. Yet he was selected nine picks after Garrett.

A look back at the 2014 Fabulous 55 — and how those prospects’ careers panned out:

12 Big Things to know about Big 12 basketball: Nearing halfway, and the SEC is here