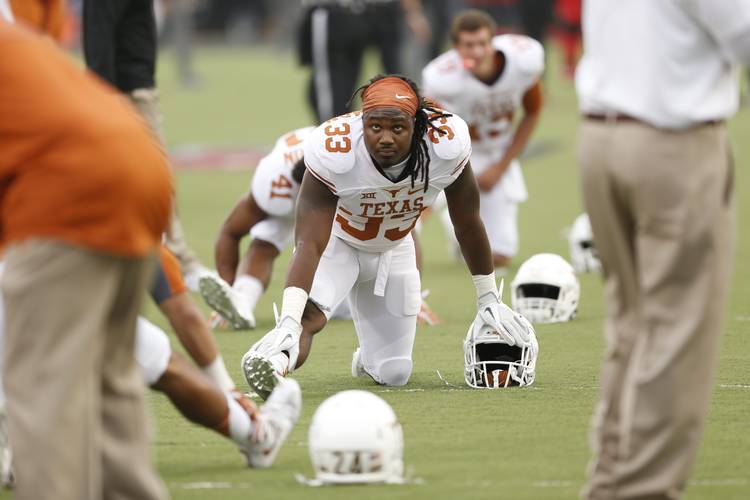 Texas running back D'Onta Foreman warms up prior to the Longhorns game against Texas Tech at AT&T Jones Stadium in Lubbock Saturday November 5, 2016. JAY JANNER / AMERICAN-STATESMAN

If we knew then what we know now, the top 10 prospects on our 2014 Fabulous 55 list of the state’s top recruits would have looked like this:

1. Myles Garrett, defensive end: The Texas A&M defensive end from Arlington Martin was the top player taken in the 2017 NFL draft. He finished his Aggies career with 32.5 career sacks and 48.5 tackles for loss. He’s now starring for the Cleveland Browns. 2014 Fab rank: 1st

2. Patrick Mahomes, quarterback: Was the 10th overall player taken in the 2017 draft and just led the Kansas City Chiefs to the AFC championship game in his first season as a starter. Threw for 11,252 yards and 93 touchdowns in his three-year Texas Tech career. He was a three-sport star at Whitehouse; in his senior season there, he threw for 4,619 yards and 50 touchdowns. 2014 Fab rank: Not ranked

4. Jamal Adams, defensive back: The Lewisville Hebron star played in all 13 games as an LSU freshman and was consistent all three years in Baton Rouge — 66 tackles as a freshman, 67 as a sophomore and 76 as a junior. He finished with five career interceptions and was the sixth overall pick of the 2017 draft. 2014 Fab rank: 4th

5. James Washington, wide receiver: Like Mahomes, Washington was largely overlooked during the 2014 recruiting cycle. The small-school (Class A Stamford) star played football, basketball, tennis and ran track and signed with Oklahoma State, where he was in the same signing class that included quarterback Mason Rudolph and JUCO running back Tyreek Hill. He played four seasons in Stillwater, finishing with 226 catches for 4,472 yards and 39 TDs before being taken in the second round of the 2018 draft by the Pittsburgh Steelers. 2014 Fab rank: Not ranked

6. Samaje Perine, running back: Went on to lead the Big 12 in rushing as a freshman and broke Oklahoma’s career rushing record by his junior year. The Pflugerville Hendrickson product was a fourth-round pick of the 2017 draft by the Washington Redskins, where he’s still playing today. 2014 Fab rank: 28th

7. D’Onta Foreman, running back: At the time, it was Foreman’s twin brother Armanti — a four-star wide receiver from Texas City — who was considered the better recruit. Texas signed them both. D’Onta didn’t even register an overall national prospect rating by 247Sports’ composite rankings that year and was considered the 135th best prospect in the state and the 64th-rated running back nationally coming out of high school. But he went on to rush for 2,000 yards in 2016, breaking Earl Campbell’s UT record for consecutive 100-yard games and becoming the third Longhorns running back (Ricky Williams, Cedric Benson) to win the Doak Walker Award. He’s playing for the Houston Texans. 2014 Fab rank: Not ranked

8. Armani Watts, safety: The North Forney star became a fixture for four years on Texas A&M defenses, starting all four years. He led the Aggies in interceptions when he was a freshman and in 2017 earned third-team All-America honors and was an All-SEC selection. The Chiefs took him in the fourth round of the 2018 draft. 2014 Fab rank: 16th

9. KD Cannon, wide receiver: The Mount Pleasant star had 1,000-yard seasons his last three years in high school and was Baylor’s top-rated recruit in 2014, a five-star prospect rated as the country’s fourth-best receiver behind Speedy Noil (Texas A&M), Malachi Dupre (LSU) and Ermon Lane (Florida State). He set Baylor freshman records with 50 catches for 868 yards and six touchdowns, had a solid sophomore season and then exploded as a junior in 2016 (87 catches for 1,215 yards and 13 TDs). He left Baylor after that season, finishing his college career with 195 catches for 3,113 yards and 27 TDs. But he went undrafted in 2017. 2014 Fab rank: 5th

10. Ben Banogu, defensive end: The Prosper product flew under just about everyone’s radar in 2014. He signed with Louisiana-Monroe, redshirted his freshman season and then transferred to TCU after earning Sun Belt newcomer of the year honors in 2015. He was the Big 12’s defensive newcomer of the year in 2017 and was an all-conference pick again in 2018. He’ll be in this year’s NFL draft pool. 2014 Fab rank: Not ranked

RELATED: Revisiting our 2014 Fabulous 55 (and no, you won’t find Patrick Mahomes or D’Onta Foreman on it)

Revisiting our 2014 Fabulous 55 (and no, you won’t find Patrick Mahomes or D’Onta Foreman on it)

Texas, Georgia meet on the basketball court this time in Big 12/SEC Challenge