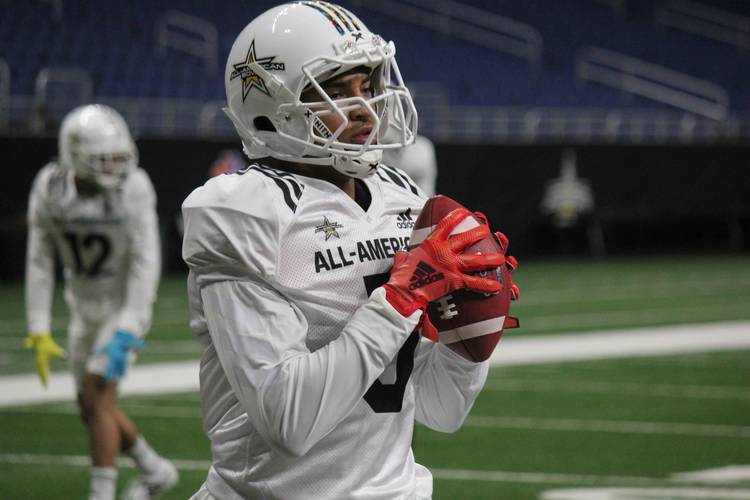 Texas set the recruiting landscape abuzz Friday afternoon when it was confirmed that five-star athlete Bru McCoy transferred to the Longhorns and plans to enroll this week. The No. 1-rated athlete in the nation signed with USC and even attended classes before entering the transfer portal and moving to Austin.

It was an interesting, and in some ways, unprecedented decision by a true freshman just weeks after signing a national letter of intent. It’s still unclear whether McCoy can play in 2019. He’s subjected to the same one-year transfer rule as any other college player since he signed early. This wouldn’t have been a problem in the years before the early signing period.

Whether it be for the 2019 or 2020 season, the Longhorns added a dynamic prospect with two-way ability. He’s the highest-ranked national prospect to choose the Longhorns since Johnathan Gray in 2012. Here’s more about McCoy as a football player and what his signing means for the Longhorns.

Skill set: McCoy truly is a rare talent with the potential to be a game-changer for the Longhorns. As a wide receiver, he’s a big-bodied physical presence who can offer Texas a real target on third down and in the red zone. He’s also deceptively fast for a teenager already over 200 pounds, as he demonstrated throughout practices and in an MVP effort during the game at the All-America Bowl in San Antonio in the first week of January.

As a defender, McCoy is an edge linebacker who can cover tight ends, running backs and does well in space as a coverage player and a tackler. He’s also tremendously physical and an excellent edge-rusher suited for third down scenarios or the B-Backer position deployed by defensive coordinator Todd Orlando.

McCoy was the MaxPreps Player of the Year because of his two-way exploits as a senior, leading Mater Dei to a second title in his prep career. Is he a wide receiver? Is he a linebacker? Is he both? We might not know until he is eligible to play for Texas. The thing every scout and recruiting writer can agree on, however, is that McCoy is an elite-level football player with unlimited potential.

Immediate impact: McCoy should make an impact for Texas as soon as he’s eligible, whether that be immediately if granted a waiver or in 2020 after he sits out a season due to transferring from USC. The modern game relies on playmakers and McCoy is too good not to immediately help Texas on offense, or even as a heavy defensive back in nickel and dime packages. His long-term future is to replace Collin Johnson as the go-to receiver on the outside.

Fitting into the program: McCoy wanted to be in Austin. He followed his head to USC and was burned when Kingsbury departed for the NFL. McCoy watched Texas beat USC in the fall and experienced the well-documented dysfunction inside the USC athletic facility first hand for a week. The incompetence in Los Angeles is Texas’ gain. McCoy is close with 2019 signee De’Gabriel Floyd and will be welcomed into the program with open arms.

Recruiting at the position: McCoy’s transfer transcends the 2019 class. It also helps in the 2020 class because the replacement for Johnson is already on campus whether McCoy can contribute in 2019 or not. He’s the fifth wide receiver to join Texas’ 2019 class, alongside five-star Jordan Whittington, Gatorade National Player of the Year Jake Smith, Under Armour All-American Game MVP Marcus Washington and the 6-foot-4 Kennedy Lewis. This group of wide receivers could make an impact similar to the defensive backs from the 2018 class like Caden Sterns, B.J. Foster and Anthony Cook.

Texas baseball opens practice with an unexpected hole at shortstop and Hibbeler, Reagan in play

Georgia 98, Texas 88: After fifth loss in six games, why are these Longhorns mentally soft?