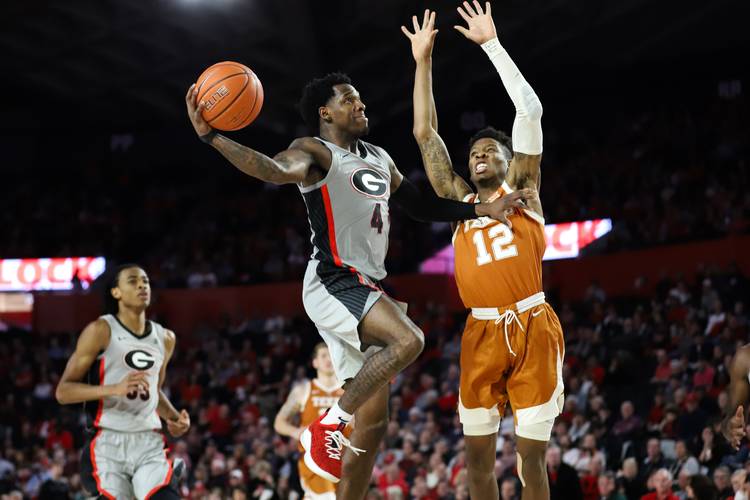 ATHENS, Ga. — This question has been bubbling under the surface these last few weeks as Texas lost a handful of close games. But after Saturday’s 98-88 loss to Georgia, the issue was unavoidable at Stegeman Coliseum.

Why is Texas so mentally soft?

Asked that question, Smart needed 24 seconds to formulate his answer.

“We just haven’t gotten to the point where we are able to let go of the last (play),” Smart said walking down an arena corridor just a few steps behind Texas Athletic Director Chris Del Conte.

“I think there’s a lot of… whether it’s feelings or thoughts about the last play, the last game — and that obviously requires maturity — but that’s an area where we are struggling right now,” Smart said.

“Yeah, we’re at a crossroads right now,” senior Dylan Osetkowski said. “It’s cliché, and it’s what everybody says. But we’ve really got to figure out what kind of team we want to be, how we want to finish off conference.

“We say it every single day. What we want to do is still right there in front of us to go do. But something has to change.”

Something has to change, for sure. At the moment, this entire season is teetering over a cliff.

“I’m tired of losing, too,” said guard Matt Coleman, who acknowledged this hasn’t been an ideal year for Osetkowski and fellow senior Kerwin Roach II. “Individually, I’ve always been a winner. I’ve never liked losing. It always comes down to doing little things better. It’s always something that you can do.”

Don’t be fooled by Georgia’s outrageous offensive totals. This was a winnable game, a phrase that can be used after almost every Texas loss.

All of this coming from a rather pedestrian offensive outfit, too. Georgia (10-9, 1-5 SEC) ranked 11th in scoring in its conference. Scoring has been a chore at times for these Dawgs. Not Saturday in the Big 12/SEC Challenge, though.

“They were focused in on me which really opened things up for our post players,” Crump said. “Also Turtle Jackson and Teshaun Hightower hit some threes for us. Then, Texas couldn’t focus on one guy. They had to worry about all of us.”

Still, this was a five-point game with 7:14 remaining. Judging by how the visitors looked in half-court sets and walking to and from the huddle during timeouts, it was already over.

Georgia was incredibly sloppy, too. The Longhorns forced 26 turnovers, and Osetkowski had a career-high seven steals. UT’s 17 steals was a season high. But Texas still somehow gave up 98 points, tying for the most allowed in four years under Smart.

But the half-court and perimeter defensive effort was so porous, so atrocious, Georgia had it easy. Layups and dunks via cutters to the basket and a torrent of wide-open shots led to this staggering number: 25 assists on 32 made field goals. The Horns just got embarrassed on that end of the floor.

Coleman twice fouled Crump on successful 3-point shots, “and that kind of opened up the floodgates for them,” Osetkowski said.

Smart didn’t hesitate when he said, “No, I don’t think anyone gave up.”

But he keeps circling back to code words to describe this team’s mental makeup.

“Circumstances is a generic word we use, but you can fill in the blank,” Smart said. “They’re making threes. I turned the ball over last time. It’s not going our way. Coach took me out. Whatever it may be, if there’s any bit of that and that’s human nature, but you have to battle that and fight that.

“So no, I don’t think they gave up, but that stuff impacted us.”

If little issues that Smart described truly bother these Longhorns, then opposing Big 12 coaches will have an easy scouting report the rest of the season. Show some aggression and Texas will fold.

All mentally soft teams always do.

“The biggest message is staying together,” Smart said. “In times like this, there’s a lot of external forces that try to pull you apart.” The coach said only a strong, cohesive unit can pull through challenging times.

“It wasn’t going to be easy today,” Smart added. “Certainly not going to be easy on Tuesday. But we’ve won games that weren’t easy. That’s the lesson we have to draw on. We have guys on our team that haven’t been there and done it.”

Commitment 101: Texas adds the No. 1 athlete in the nation in Bru McCoy