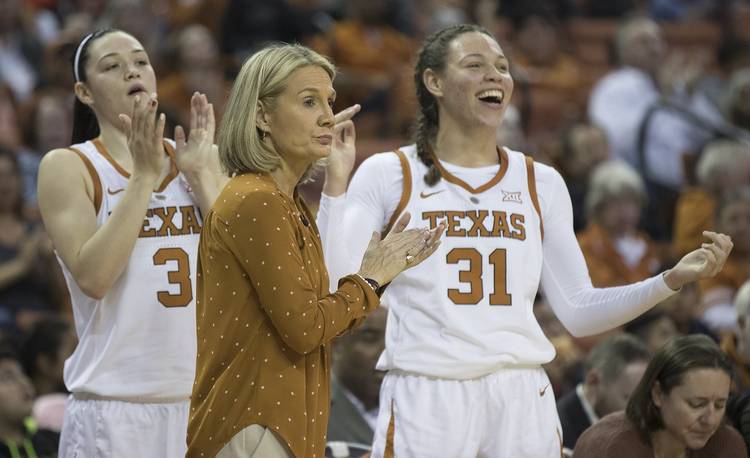 Coach Karen Aston (with Danni Williams, left, and Audrey Warren) has led her team to a 7-1 record in the Big 12, good for second place behind Baylor. [RICARDO B. BRAZZIELL/AMERICAN-STATESMAN]

Holmes and her teammates have already been up close and personal with the Mountaineers. The Longhorns earned a 70-58 victory over West Virginia three weeks ago in Morgantown.

In the Big 12, everyone gets a rematch.

The Big 12 is the only Power Five Conference that adheres to a double round-robin schedule.

For Texas, 18 of its 30 regular-season games are against Big 12 opponents.

Texas coach Karen Aston probably doesn’t need to remind her team that Mountaineer forward Naomi Davenport put up 26 points against the Longhorns in their first meeting. Coach Mike Carey doesn’t have to tell his Mountaineers that Longhorn guard Sug Sutton dazzled them with 19 points and six assists.

The West Virginia-Texas game Monday night at the Erwin Center marks the end of the first half of the Big 12 season.

Playing teams twice has special challenges for coaches, too.

“The coaches try to figure out little things and intricate ways to execute the second time around, knowing that the other team is going to make it really, really hard on you,” Aston said. “Your discipline comes into play the second time. Depth starts to come into play. It’s enjoyable because, at the end of the day, whoever wins it knows that they really won it. It’s such a grind of consistency that has to happen.”

West Virginia senior guard Katrina Pardee is expected to miss the game with an ankle injury. The Vista Ridge High School graduate was averaging 13 points and five rebounds when she was injured Jan. 13 during a game against Iowa State.

The Mountaineers “look a little different in the sense that she was a three-year starter for them and probably one of their best perimeter players,” Aston said. “They may look different. They seem a little better defensively right now.”

West Virginia, which has won five of its last six games, certainly was defensive in Saturday’s victory over K-State. The Wildcats shot 20 percent from the field (11-for-55) and were 0-for-18 on 3-pointers. A few Mountaineers played through illnesses Saturday, Carey said.

“Give the credit to the players,” he said of his team’s hot streak. “It’s not like we’re really practicing hard right now, because we really can’t practice hard right now. They’re staying focused, and they’re coming out and giving everything they have. … It takes a lot of heart to do what they’re doing right now.”

Georgia 98, Texas 88: After fifth loss in six games, why are these Longhorns mentally soft?