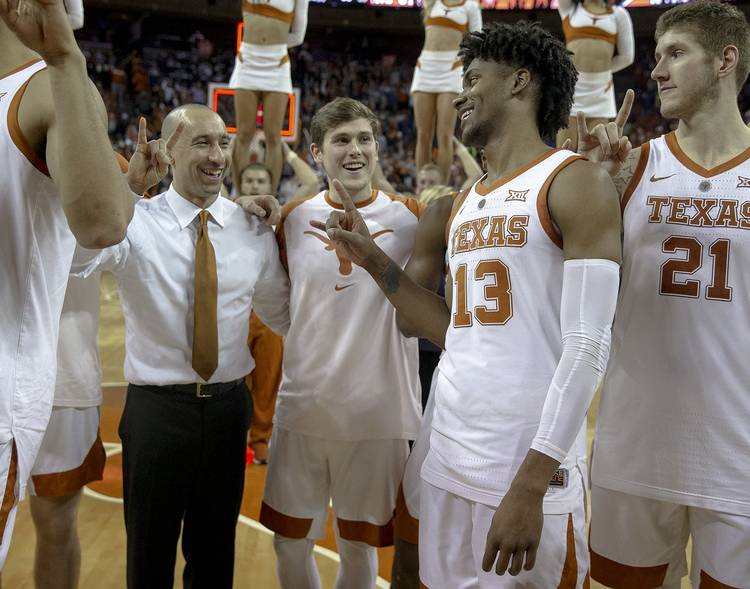 UT coach Shaka Smart knew it was critical. At one point, he was down on one knee, banging both palms on the court.

A crowd listed at 11,934 knew it was pivotal. Texas fans were on their feet in the final minute as Roach drilled six consecutive free throws. Plenty of folks held their breath, but Texas closed out a 73-63 win.

“Before this game, I was zero-and-seven versus KU,” Roach said. “One-and-seven, I’m taking it. It’s very hard to get a win versus KU.”

It’s been a rough-and-tumble January for these Longhorns (12-9, 4-4 Big 12). This was about the best way imaginable to close it out. By knocking off Kansas, Texas snapped a 10-game losing streak in the series.

Smart got his first win against Kansas coach Bill Self since that famous 2011 NCAA Tournament win at Virginia Commonwealth. It propelled the Rams into the Final Four and made Smart a household name.

That win alone was a major reason why athletic directors from all over the country wanted to steal Smart away from Richmond, Va., including those at Texas.

“Feels great,” Smart said, “but it’s more about we needed to win this game for us, regardless of who the opponent was.”

Texas has no control over the league schedule. Kansas (16-5, 5-3) just happened to come three days after one of UT’s most embarrassing defensive performances in ages. Texas gave up 98 points to Georgia. If this team couldn’t respond against the reigning 14-time Big 12 champs, would it ever?

“Coach always talks about being the aggressors, being the first team ready, being the team that does more of what goes into winning,” Osetkowski said. “I think we did that tonight.”

It’s an average Kansas team, to be sure, but it’s one that couldn’t get much going at the Erwin Center. Hayes had two blocks, the Jayhawks had three shot-clock violations and six turnovers in the first 12 minutes. Kansas had four turnovers the entire night against Texas on Jan. 14.

This wasn’t the same Texas team that drifted through Athens, Ga., last Saturday and got shellacked. Not even close. The Horns shot 54.5 percent and scored 47 points in the second half and closed it out despite letting an 11-point lead dwindle to four. Kansas led a total of nine seconds the entire game.

“I feel like it was a collective effort defensively,” Roach said. “It started on the defensive end. That’s what we put our emphasis on.”

It took the Jayhawks 9 minutes, 52 seconds to score 10 points. Kansas’ Dedric Lawson and Marcus Garrett combined for two points in the first half. They had 37 combined against the Horns in the first game. Lawson finished with 13; Garrett had two.

Kansas freshman Ochai Agbaji, who was on track to redshirt this season, got his first start against UT and had a game-high 24 points.

“I played poorly today,” Lawson said. “I should have done better job finding my teammates when I was struggling and didn’t make shots when I had them.”

Self didn’t hold back dissecting his team’s mental makeup.

“The thing about it is, when you lose, it should really piss you off,” Self said. “And sometimes when it doesn’t do that, you’re kind of too comfortable sometimes with accepting what happened. I don’t think that we’ve accepted what happened. I don’t think we have the same mindset to fight that maybe some of the teams in the past have had to fight.”

Smart’s been wondering some of the same questions about the Horns, albeit not vocalizing it in that same pointed way. Just how exactly would his players respond? The coach had to be wondering himself.

“We really challenged these guys in practice,” Smart said. Sometimes, coaches worry about tired legs or overall fatigue, he said. Not this time.

“We threw that out the window,” he said. “We spent a lot of time on habits. We did a lot of boring basketball drills that coaches love. The players probably don’t, but I thought that probably helped us tonight.”

January comes to a close, and despite all the twists and turns, the Horns are still in the Big 12 mix. Smart said the league champion could have upward of six conference losses. It’s still anyone’s race.

Texas begins February by going to Ames, Iowa, to battle No. 20 Iowa State on Saturday, assuming the Cyclones haven’t been consumed by the “Polar vortex.” This team can’t really accomplish much unless it learns to stack one win on top of another.

Texas has struggled in close games and been wildly inconsistent. But it’s also a team that knows it can beat anybody. Plenty of journey remains.

“Tonight, we know it was a game we could have won or we could have lost,” Osetkowski said. “If we continue to do the right things, we’ll get on a roll.”

The Dotted Line: A closer look at the rest of the Big 12’s 2019 recruiting classes