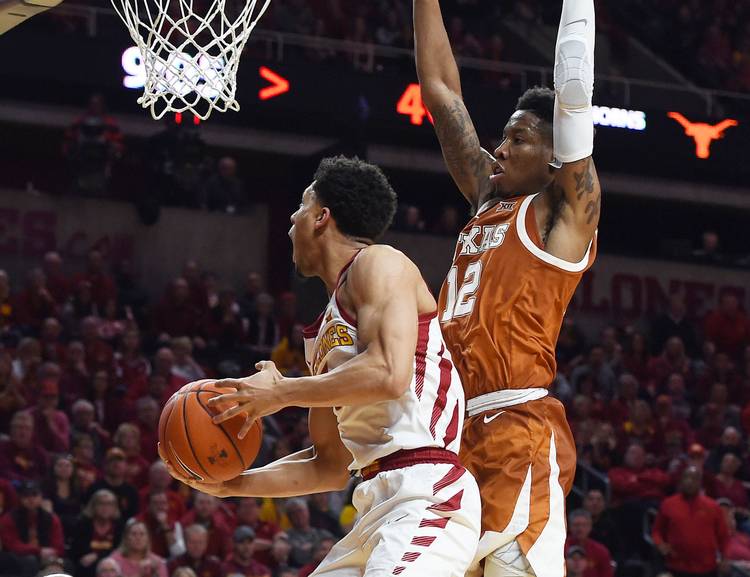 Iowa State’s Lindell Wigginton lays up the ball around Texas’ Kerwin Roach during the first half at Hilton Coliseum Saturday, Feb. 2, 2019, in Ames, Iowa. Photo by Nirmalendu Majumdar

AMES, Iowa — Like all coaches, Texas’ Shaka Smart steals anything he can — specific plays, philosophy, inspirational messages, you name it — from other coaches. His favorite is usually Alabama’s Nick Saban.

On Saturday, Smart sat guard Matt Coleman III down in front of a video of Kentucky’s John Calipari. The Wildcats coach riffed in a press conference about how P.J. Washington, Coleman’s friend, was finally playing with spirit and swagger.

After falling behind by 13, Coleman led the Longhorns back into contention Saturday at Hilton Coliseum. He buried a corner 3-pointer and then scored on a floater that gave Texas the lead against No. 20 Iowa State.

But these Horns are now landowners and taxpayers on the razor’s edge. Iowa State’s Nick Weiler-Babb banked in a jumper, and Marial Shayok hit a 15-footer that made the difference in a 65-60 loss.

A road win after beating Kansas on Tuesday would’ve made for a terrific week. Instead, the long, winding journey down the path to .500 continues for Texas (12-10, 4-5 Big 12).

“If we really can buckle down and play better defense and finish off a couple of those plays on the offensive end and we win this game, then yeah, you’re writing about momentum and the progress that our guys have made and how we can beat anyone,” Smart said.

“That’s the margin there, and that’s what is so unbelievably disappointing and challenging.”

When the opposing coach says your team kind of “muddies it up,” that doesn’t sound like a compliment. That’s what Iowa State’s Steve Prohm said afterward, though.

Iowa State (17-5, 6-3) went for the knockout blow after Coleman’s two buckets. Weiler-Babb hit a 3-pointer, and then Lindell Wigginton buried a corner 3-pointer and got grazed by UT’s Dylan Osetkowski. That four-point play gave Iowa State a 52-48 lead.

The Horns were still in it after transition 3-pointers from Courtney Ramey and Roach. Hayes, playing in front of about 30 family and friends, had a rather impressive putback with 1:28 left to get within one.

“We weathered the storm,” Roach said. “I feel like in these close games, we’re always fighting. It’s just one or two plays down the stretch we couldn’t make and they made. And they’re winning plays.”

Coleman was ready to play from the start. His teammates? Well, it was a hard slog initially. One of Coleman’s layups was wiped out by Jericho Sims’ basket interference. Texas started the day 1-for-7 from the floor, 0-for-4 from 3-point range and had four turnovers in the first six minutes.

Coleman’s driving layup and jumper late in the first half helped to make it a four-point game at the break.

Asked if battling from behind drains the team’s energy, Hayes said, “It doesn’t eat up our energy as much as it just gives them energy, I feel like. That just helps them even more.”

Iowa State fans, accustomed to “Hilton Magic,” watched their team miss multiple alley-oop chances and several layups in the second half. But they were going wild at the end.

The Longhorns, having lost a spate of close games this season, are just doing mad.

“You’ve just got to win games,” Roach said. “We never out for the count in any game we play. I feel like we have to keep playing our basketball. It will fall in our lap.”

Asked what it will take to break out of this .500 rut, Roach was philosophical.

“The basketball gods are going to treat you good as long as you treat the game good,” he said. “I feel like we’ve been treating the game good. It’s going to eventually happen for us.”

The Fabulous 55 is celebrating 30 years, and oh how recruiting has changed since 1989