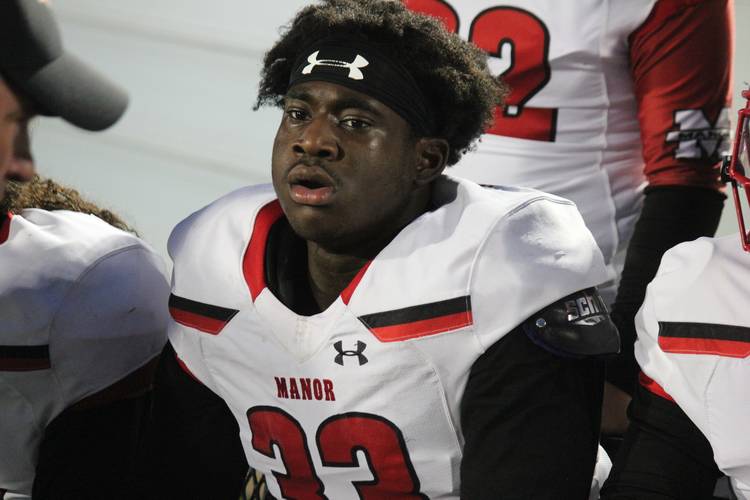 40. Devon Achane, WR, Fort Bend Marshall (5A), 5-9/170, Undecided — Achane is a speedster who can play wide receiver or some running back on third down. He helped Marshall reach a state title game in 2018 and is also a star on the track.

39. Korie Black, CB, Waco Connally (4A), 6-0/165, Undecided — Black is a long, rangy cornerback with solid instincts and physicality. He already holds offers from programs like Baylor, Oklahoma State and Houston.

37. Akinola Ogunbiyi, OG, Fort Bend Kempner (6A), 6-4/310, Committed to Texas A&M — A&M is loading up on big, physical offensive linemen to compete in the SEC and Ogunbiyi fits the mold. He’s capable of playing offensive tackle, but his long-term future is at guard.

35. Smart Chibuzo, OT, Fort Bend Hightower (5A), 6-5/319, Committed to Texas A&M — Chibuzo is one of four offensive linemen already committed to Jimbo Fisher and Texas A&M. He possesses the most upside of any of them because of his long arms and tall frame.

34. DJ Graham, ATH, Keller Central (6A), 6-0/172, Undecided — Graham is talented enough to star on offense or defense at the next level. He was a first-team all-district selection at wide receiver and a second-team selection at cornerback during his junior season. Cornerback is the most likely destination.

33. Damieon George, OT, Galena Park North Shore (6A), 6-6/320, Undecided — George is a large part of the best offense in Texas high school football. He’s a towering presence who continues to improve his footwork and athleticism with age.

32. Jaylen Garth, OT, Port Neches-Groves (6A), 6-5/285, Undecided — Garth is a big-time Texas target and one of the best offensive line prospects in this cycle. He only started playing competitive football in high school and is constantly improving his technique.

31. Princely Umanmielen, DE, Manor (5A), 6-4/240, Undecided — Umanmielen is as hard to block for offensive linemen as his last name is to spell for sports writers. He can play defensive end or defensive tackle because of his combination of size and athleticism. He’s probably not done growing, either.