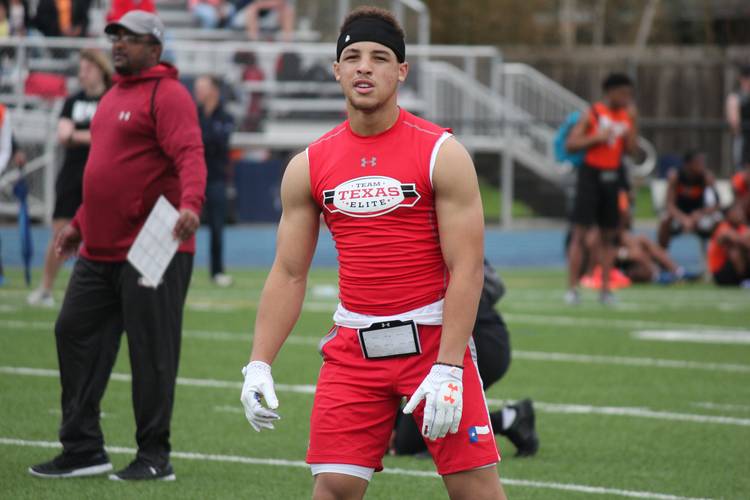 54. Ken Seals, QB, Weatherford (6A), 6-3/195, Undecided — The ball zips out of Seals’ hands, and he’s an advanced pocket passer for a prep quarterback. He passed for 2,654 yards and 20 touchdowns as a junior. Touch and accuracy are his best traits.

53. Josh Bankhead, OG, The Woodlands (6A), 6-4.5/319, Committed to Texas A&M — Bankhead is a bully in the most desired way possible for an interior lineman. He’s a mauler at the point of attack and is an adequate pass blocker.

52. Quentin Johnston, WR, Temple (6A), 6-4/180, Undecided — Coaches can’t teach the type of frame possessed by Johnston and he has the speed to be a real playmaker at the college level as he continues to improve as a route runner and overall wide receiver.

51. Haynes King, QB, Longview (6A), 6-3/180, Undecided — King led Longview to a state championship as a junior. He possesses a big arm and the ideal frame for a quarterback. He’s also the coach’s son and understands football.

49. Parker Washington, WR, Fort Bend Travis (6A), 5-11/195, Undecided — Washington is always open. He might not possess the best frame or the ideal height, but he’s a great route runner and catches everything in his radius.

48. Kelvontay Dixon, ATH, Carthage (4A), 5-11.5/173, Undecided — Dixon is ready to write his own recruiting legacy, following in his brother’s Keaontay Ingram shadow at Carthage. Dixon is an athlete who plays all over the field. He’s likely a slot receiver in college.

47. Trent Pullen, OG, Waco Connally (4A), 6-2.5/275, Undecided — Pullen is a big, aggressive interior lineman with solid footwork. He can play guard or center, which makes him a valuable prospect in recruiting circles.

46. Michael Henderson, ATH, Carrollton Ranchview (4A), 6-2/220, Undecided — Henderson is poised for a position change in college. The high school quarterback can play wide receiver or outside linebacker at the next level. He’s a physical player with athleticism.

45. Brennon Scott, OLB, Bishop Dunne (TAPPS), 6-2/220, Undecided — Scott covers ground impressive and is a thumper as a tackler. He’s solid in coverage, but does his best work coming downhill and might be an inside linebacker in college.

44. Jordan Jefferson, OG, Navasota (4A), 6-1/325, Committed to Texas A&M — Jefferson is a tough, physical interior offensive lineman who moves well for his size. His lack of height gives him a leverage advantage and he gets to the second-level of the defense routinely.

43. Jaxon Smith-Njigba, WR, Rockwall (6A), 6-1/188, Committed to Ohio State — Smith-Njigba is a polished route runner and consistent as a pass catcher. He’s also an explosive athlete after the catch who can help as a returner.

42. Josh White, OLB, Cy Creek (6A), 6-1/200, Undecided — White is a freak athlete at outside linebacker who can run, cover and hit. He’s also an intriguing pass rusher off the edge. He lives in the backfield and is always around the football.

41. Jerrin Thompson, S, Lufkin (5A), 6-0/172; Undecided — East Texas produces high-quality safety prospects and Thompson is next in line with a strong combination of speed and instincts. He’s a free safety with strong coverage ability.

The Dotted Line: Who will top the initial 2020 Fabulous 55? (We’ll find out Thursday)