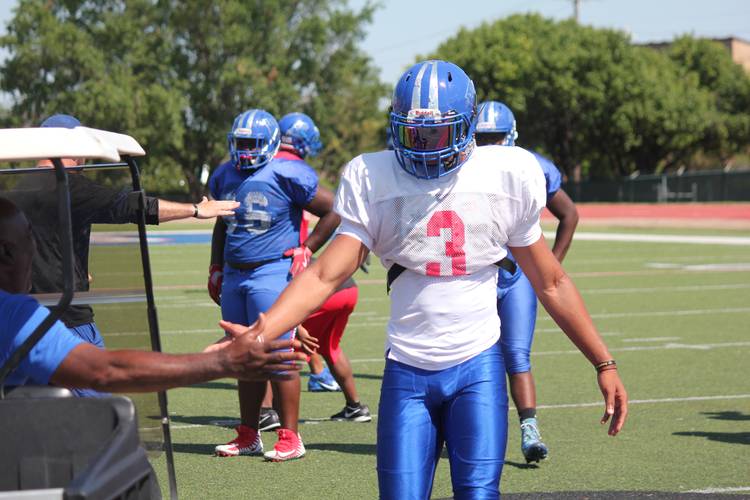 It’s time to focus on a new batch of targets. The 2019 class is virtually already old news as of national signing day. Texas currently holds the No. 3-ranked class in the nation and is only awaiting Wednesday’s decision by four-star offensive tackle Javonne Shepherd after signing its other 23 pledges in the early period.

The 2019 Fabulous 55 was led by Lake Travis wide receiver and Ohio State early enrollee Garrett Wilson. It’s now time to crown the new best player in Texas and there are five 2020 candidates who separated themselves from the pack as juniors.

Wilson didn’t start the 2019 cycle as the Fab 55’s top-ranked player, so nothing is set in stone. But our initial 2020 Fabulous 55, which will be released on Thursday, will be topped by one of these five prospects, who are listed here alphabetically:

Case for: A young Julio Jones is emerging in the Houston area and the Texas A&M commit is unstoppable when given opportunities. Demas is tall, long and can out-jump nearly any defender in the country. He’s electric after the catch and physical enough to defeat bump-coverage. Demas is the type of receiver to demand double teams in college and that’s rare.

Case for: Evans is the clear-cut favorite to go wire-to-wire as the state’s top prospect in 2020. He’s drawing comparisons to Adrian Peterson and is on a team that can repeat as Class 6A Division I state champions in his senior season. His combination of size, strength, power, balance and vision is rare.

Case for: Some athletes simply require a jersey. Jackson is a football player, even if no one knows what his long-term position will be at the college level. He’s a quarterback at Duncanville but it’s unclear whether he wants to stay at that position after high school. Jackson plays some wide receiver in 7-on-7 tournaments and is built like an outside linebacker. That’s for college coaches to figure out, though. All I know is that Jackson is among the five best players in Texas.

Case for: McGlothern is the best defensive back in the state and that puts him in the conversation to be the state’s top player. He looks like a safety because of his height and long wingspan, but he’s capable of playing cornerback because of his hips and footwork. It’s hard to imagine a more physically gifted corner and McGlothern is elite when focused.

Case for: The two-time first-team all-district wide receiver totaled 85 catches for 1,546 yards and 21 touchdowns in his first two years on varsity. Omeire is a freakish athlete with a tremendous frame and consistent hands. His offer list includes the nation’s elite programs and he’s high on both Texas and Texas A&M. His willingness to block shouldn’t be undervalued.

Meet the Longhorns: Five-star Bru McCoy adds explosiveness in 2019 or 2020