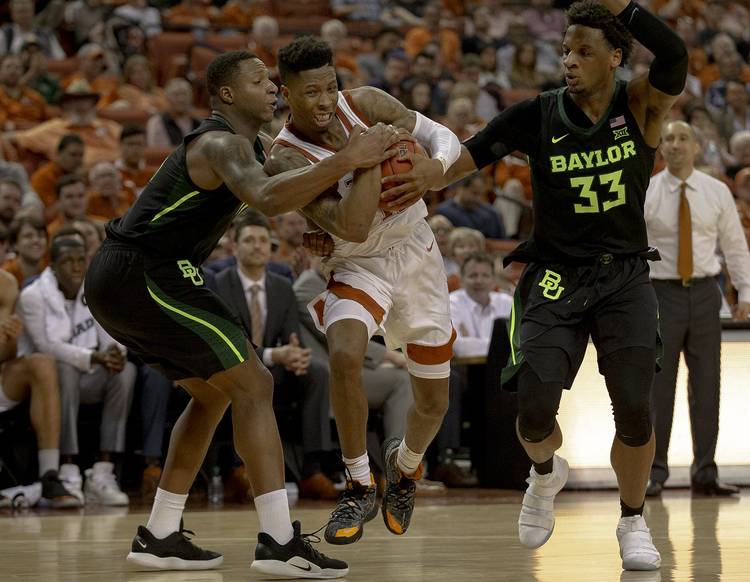 Maybe the Longhorns have been watching too much TV. Or perhaps some of them have been staring at the Big 12 standings, ESPN’s “Bracketology” or kenpom.com.

It sounds like Texas players finally realize what’s been obvious for weeks: This team can still finish in the upper half of the conference race and cruise into the NCAA Tournament with real momentum. Or it can succumb to its inconsistent ways, languish in the bottom half of the standings and risk getting left out on Selection Sunday.

“We’ve got eight games left and it’s wide open,” Texas guard Matt Coleman III said. “Right now it’s crunch time. In the league right now, they talk about five teams and we’re not one of them.”

Time to start doing something about it. So on Wednesday night, Texas put together a complete 40-minute effort on and cold-cocked Baylor 84-72 at the Erwin Center.

These Longhorns, the ones that ended a six-game series losing streak to the Bears, probably could’ve beaten anybody. Texas shot 55 percent, the team’s first time over 50 percent in a month, and had five steals and just nine turnovers.

“I want to say, this is my first win over Baylor at home, too,” UT senior Kerwin Roach II said with relief. “That’s also a good accomplishment.”

Baylor (15-7, 6-3 Big 12) fell from the top spot in the Big 12 standings and saw its overall six-game winning streak snapped. “You could just tell they came to play,” Bears guard Jared Butler said. “They punched us and we didn’t punch back. That was the difference.”

It’s no secret that Texas (13-10, 5-5) has been inconsistent. “We got the good game today, I think,” Baylor coach Scott Drew said with a clenched jaw. “We didn’t have the energy that they had to start the game, so you’ve got to credit them for the way they played.”

Baylor fans who made the drive down Interstate 35 probably couldn’t believe their eyes in the first 10 minutes. The Bears were careless with the ball, missed nine of their first 14 shots and fell behind 23-11. Drew was worked up from the jump about the lopsided nature of the whistles. He finally saw enough and got hit with a technical foul with 4:17 left before halftime. Baylor had been called for 11 fouls by that point compared to UT’s four.

“Wouldn’t you be?” Drew said. As for the actual technical foul, “That was trying to help ’em out,” he said.

Texas’ guards continually pushed the ball inside and looked for mid-range opportunities. Roach had a game-high 21 points on 7-of-9 shooting. Coleman had 18 points and was 8-for-9 from the free-throw line. Jaxson Hayes had 12 points, including two on an alley-oop where he changed some light fixtures while going up to catch the lob.

It helped that Baylor’s Makai Mason, the Big 12 player of the week, was slowed by a foot injury suffered in practice. He had 40 points last weekend. Against Texas, Mason had only five on 1-of-7 shooting and eventually sat down after 23 minutes.

Baylor finally ignited in the second half, but UT’s Jase Febres hit back-to-back 3-pointers from the same spot on the right wing. The Horns were almost pulled into a 3-point shooting contest, and that’s when Roach drove inside for an easy 8-footer.

Then Coleman found Jericho Sims on a pocket pass for a smooth left-handed layup and foul. Baylor players looked dejected as Texas went up by 17 with 10:07 remaining.

“We didn’t overthink anything,” Coleman said. “We knew what we were doing, no matter what defense they were in. The biggest thing was we got paint touches, and that allowed us to make plays.”

Said Roach: “We preach paint touches — three-to-one. We want to get (the ball) in there three times. It’s something we’ve got to do more of and do more consistently and that’s it.”

This would’ve been a blowout had Texas closed it out at the free-throw line. The Horns missed the front end of three one-and-ones in the final 4:28 that could have padded the final score.

“This is the Big 12,” Drew said. “Each and every night is a dogfight; if you don’t bring your A-game, you don’t even have a chance to win that game, let alone a conference championship.”

The Horns are still in the championship hunt despite the uneven month of January. But there’s little margin for error at this point.

Texas next goes on the road to West Virginia, a team that won by 35 points the last time the two clubs met in Morgantown. It was the biggest loss of Smart’s tenure with the Horns.

This year, coach Bob Huggins’ club is in the Big 12 basement, although West Virginia still found a way to beat Kansas at home. If Texas can’t start stacking wins, it’ll be a hard slog to the finish line.

“I know personally, it’s hard to play in West Virginia,” Coleman said. “We lost by 30 last year on national TV. That’s a little fuel in my fire.”

Texas notebook: Horns assistants update their titles but are expected to stay put in 2019