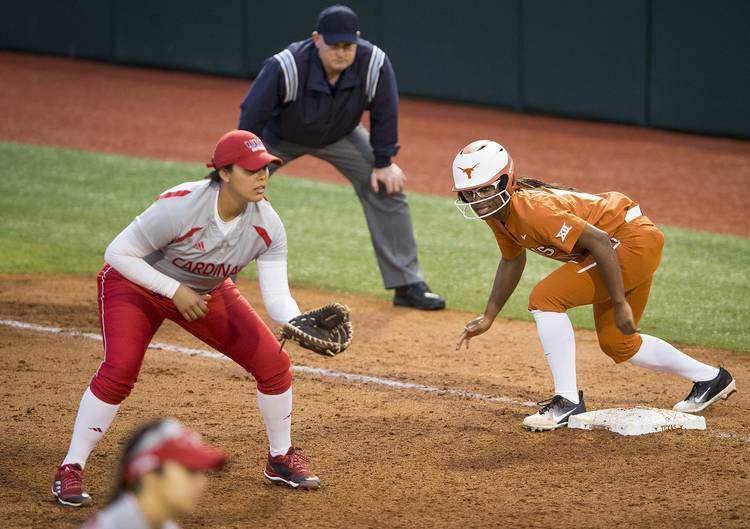 Texas outfielder Ki'Audra Hayter (10) waits to make her move to second base during against Incarnate Word in Austin on Feb. 9, 2018. NICK WAGNER / AMERICAN-STATESMAN

But McCombs Field and the postseason have not been synonymous since Washington arrived on campus, however. In fact, Texas has traveled for the regional round of the NCAA tournament each of the last five years.

The expectations are that will change this season. Texas enters this spring ranked 16th in the preseason polls compiled by USA Softball and the NFCA. The upstart Softball America tabbed UT as the ninth-best team in its inaugural rankings.

When the NCAA tournament begins in May, by the way, the top 16 teams will host a regional.

“People can say how good we’re going to be, but it’s really just up to us to be good,” Washington said.

So, just how good can Texas be? The Longhorns will begin to answer that question this weekend. Texas hosts five games over the first weekend of the season. Its first two appearances are scheduled for Friday.

First up for Texas is Northwestern State at 4:30 p.m. on Friday. The showdown with the Lady Demons will be the first game at Texas for new head coach Mike White. Four transfers from Oregon, where White had coached the previous nine seasons, and five freshmen also will make their UT debuts.

White replaces Connie Clark, who resigned last May after spending 22 seasons with the program she founded. All but one of the 14 players that White inherited opted to stay at UT. That was in stark contrast to an Oregon program that has lost nine transfers since it hired former Oklahoma assistant Melyssa Lombardi to succeed White.

“Sometimes when coaches fit, they fit,” junior catcher Taylor Ellsworth said. “I think our coaches fit really well with us. We’ve meshed with them, just over the fall season and coming into the spring. The shoe fit for most of us here.”

Upon his hire, White analyzed that Texas needed to hit more homers and steal more bases. He later said the Longhorns wouldn’t be married to their defensive positions because he just wanted to insert his best bats into the lineup. White said this week that more softballs were being hit over the fence in practice, and the Longhorns battled to a 10-9 score in an intrasquad scrimmage on Wednesday.

“Offensively, we’re ready to hit. I think that there’s going to be a lot of short game, a lot of long ball,” Ellsworth said. “Base-running, hitting, defensively, I think the big mindset is just going out and being aggressive.”

White joked on Wednesday that “right now, I’ve got a great problem. I don’t know where to play everybody.” The goal of this opening weekend will be to win every game, but White will use multiple lineups. Junior Miranda Elish, who spent the last two years at Oregon, and reigning all-conference honoree Brooke Bolinger should see the majority of the time in the pitcher’s circle.

In addition to Northwestern State, Boston College and Boise State also are in town for the annual Texas Classic. Boise State, which will play Texas on Saturday afternoon, joined the Longhorns in a Washington-hosted regional in last year’s NCAA tournament.

“We’re so ready,” Elish said. “We’re going hard against each other (in practice). We’re just competing with ourselves and I’m really, really excited to finally play somebody other than ourselves.”