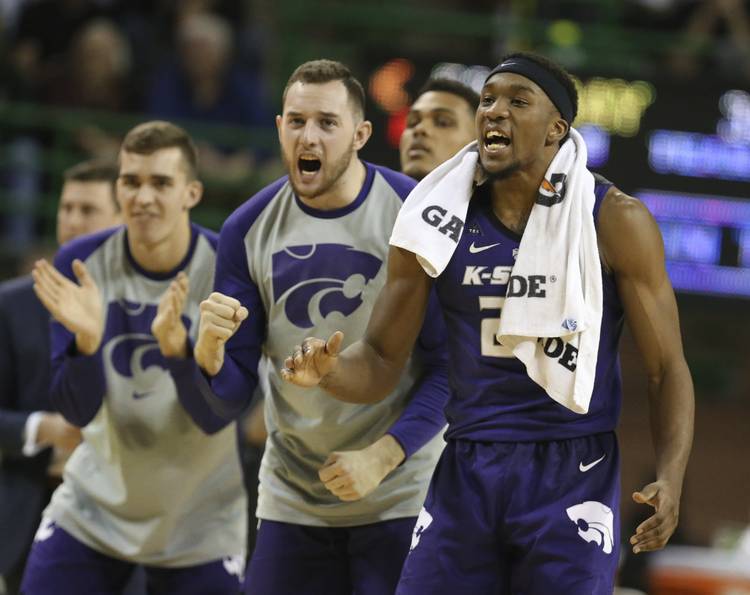 Kansas State guard Cartier Diarra, right, reacts to a score against Baylor in the second half of an NCAA college basketball game, Saturday, Feb. 9, 2019, in Waco, Texas. (Rod Aydelotte/Waco Tribune Herald, via AP)

This feels like a week where the Texas men’s basketball program can get its mojo back.

After that embarrassing Georgia loss on Jan. 26, coach Shaka Smart’s club has won three of its last four against Big 12 opponents. That includes a win over Kansas and a 22-point dribbling of last-place West Virginia, the most lopsided league win in Smart’s four seasons.

First-place Kansas State, newly minted with a No. 18 national ranking, comes to the Erwin Center at 8 p.m. Tuesday followed by a home game against Oklahoma State on Saturday.

The Longhorns know this is big. “They’re the No. 1 team in the conference right now,” guard Matt Coleman III said. “I think that’s all the motivation that we need.”

The coach knows it’s big, too. He shot a quick promotional video for the school’s Twitter account.

“We need you there. We need you early. We need you loud,” Smart said while looking directly into the camera. “Big game for us. First-place Kansas State coming into our home arena. You guys give us unbelievable energy. See you (Tuesday) night.”

“We’ve got them in our own place,” Coleman said of K-State, winners of eight straight conference games. “They have all their weapons back, so we know it’s going to be a test, be a fight and we’ve got to keep doing what we’re doing.”

Dean Wade, the preseason Big 12 player of the year, did not play, nor did double-digit scorer Kamau Stokes. Both Wildcats were sidelined with injuries. Wade is averaging 16.3 points since his return to full action in mid-January. Stokes averages 10.3 points.

It’s a dynamic 1-2 scoring punch that, when mixed with Barry Brown (15.3 points) and Xavier Sneed (9.8), give the Wildcats plenty of firepower.

“It’s all the same guys that came in here (last season) and ended up going to the Elite Eight,” Smart said.

The previous game was a back-and-forth affair. K-State led by one with 11:40 remaining, and then UT’s Jase Febres hit two 3-pointers. Jaxson Hayes had two dunks and a tip-in, and next thing anybody knew, Texas was up by 10 en route to the finish line.

“We fought our butts off for about 30 minutes. We broke down,” K-State coach Bruce Weber said that night. “They just blitzed us down the stretch.”

Opposing coaches can see the Horns were starting to click. Kansas coach Bill Self called out his own team for a lack of fight in a 10-point loss at the Erwin Center. Iowa State’s Steve Prohm was relieved more than anything after Nick Weiler-Babb hit some clutch shots against Texas in Ames.

Baylor’s Scott Drew and West Virginia’s Bob Huggins were both struggling for answers after losing to UT last week.

But if there’s one thing these Horns have not done is handle prosperity well. Texas started Big 12 play with wins over K-State and WVU, then showed up pancake-flat in the first half against Oklahoma State. The Cowboys won by three, pushing the Horns down a three-game losing streak. Smart said that performance in Stillwater was “probably as disappointed as I’ve been in our team this year.”

“There have been times when we get too excited when some things go our way,” Smart said. “We’ve got do the next thing, we’ve got to get the next stop. This game tomorrow night will be a big test of that.”