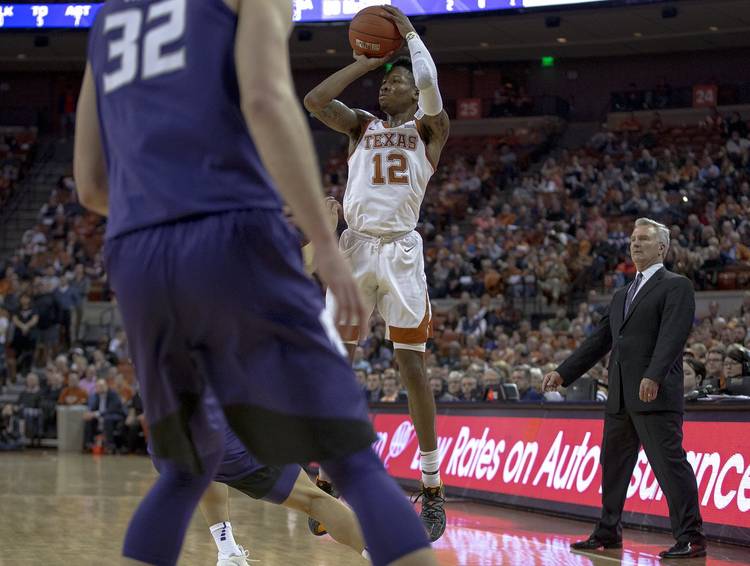 The effectiveness of any one coach’s motivational tactics must be judged on a sliding scale.

You don’t have to eat worms, punch a whiteboard or dog-cuss players about how this isn’t some bleeping game, “this is about our lives!”

Being subtle works, too. Just show ’em the video, as Kansas State’s Bruce Weber did leading up to Tuesday night’s rematch against Texas. The eye in the sky doesn’t lie.

“The first game we played ‘em, God, we go back and watch it and we were so disappointed,” Weber said. “We were so soft.”

The Longhorns won by 20 on Jan. 2 as Weber compared his team to that of a woebegone school crossing guard. “We just stood there like this, letting kids go by us,” he said. “We wanted to fight ’em, but maybe we were too over-anxious.”

Texas used the same plan of attack this time around, driving inside and getting a slew of mid-range jumpers and layups. But in the second half, K-State used a zone defense and turned Texas into a jump-shooting team. Gulp!

The 18th-ranked Wildcats simply waited the Longhorns out and captured a 71-64 win at the Erwin Center. Not even the Minister of Culture, Matthew McConaughey, who was sitting on the bench again, could pull this one out. He’s now 1-1 in that bespoke burnt-orange suit as Texas (14-11, 6-6 Big 12) fell back to .500 in league play.

UT’s five-point loss against Iowa State was decided by two or three plays. This one also was decided by the thinnest of margins. “They’ve got to be the best 14-11, 6-6 team in the country,” Weber said of Texas. “I think they can do damage in the NCAA Tournament.”

The Longhorns were 13-for-19 shooting two-point field goals in the first half — a staggering 68.4 percent success rate. The guards penetrated the lane, moved the ball with efficiency and played with brilliance. But K-State went to the zone in the second half, and UT coach Shaka Smart said, “It  got our guys on our heels.”

In the final 12 minutes, 38 seconds, Texas made only three of its 11 shots. Two of those were dunks, and the third was a Jase Febres 3-pointer. Seven of the other eight shots were missed 3-pointers from a team that ranks ninth in the Big 12 in 3-point shooting.

“We had some good looks, especially for myself,” guard Kerwin Roach II said. “I didn’t hit a three today. I mean, we can knock down shots. We just didn’t knock ’em down today.”

Roach was frustrated after getting a team-high 17 points but going 5-for-13 overall and 0-for-5 from downtown. Courtney Ramey had 10 points but sat down the stretch as Smart opted for Jase Febres, thinking the sophomore would catch fire from long range like he did on Jan. 2.

TV cameras caught Ramey giving his own teammates the business a few times. Whether viewers saw selfishness or determined leadership is dependent on one’s personal viewpoint.

“No, I like when he does that. We need aggressiveness. I wasn’t mad at him at all,” Smart said. “It was really just more of a judgement call of can Jase get loose for a couple of shots.”

On balance, this was a rather entertaining affair. K-State was without pivotal reserve Cartier Diarra but mainly brought the same group that reached the Elite Eight last season. Texas was aiming for its third straight win.

The Wildcats asserted themselves after halftime with a 10-2 run sparked by Xavier Sneed’s 3-pointer. The Horns had some crazy moments. Ramey threw the ball away on an inbounds play when there was some miscommunication. Roach later had a bad pass that led to a run-out dunk.

Still, Texas had chances. Dylan Osetkowski got a shooter’s roll on a 3-pointer that gave UT a 47-45 lead. But K-State answered with another 9-0 spurt. Dean Wade’s 18-footer gave the visitors a 56-59 lead.

From that point on, Texas went away from dribble penetration, which was working, and tried to shoot over K-State’s zone, which didn’t.

“It’s crunch time of conference play,” guard Matt Coleman III said. “Coming off of two good games, one home and one on the road. We played well. We just didn’t do enough.”

Jaxson Hayes may be considered a sure-fire NBA lottery pick. But his limited offensive game was on full display for the scouts in attendance during his 32 minutes. Hayes had nine points via a tip-in, an easy jumper, a dunk and three free throws. No way was K-State going to let him roll to the basket for easy lobs.

And that really describes where Texas is right now. These Horns make a lot of good plays. But they need just a little bit more. From everybody.

“It’s really a matter of one or two plays going different over the course of the game, but you have to make them go different,” Smart said.