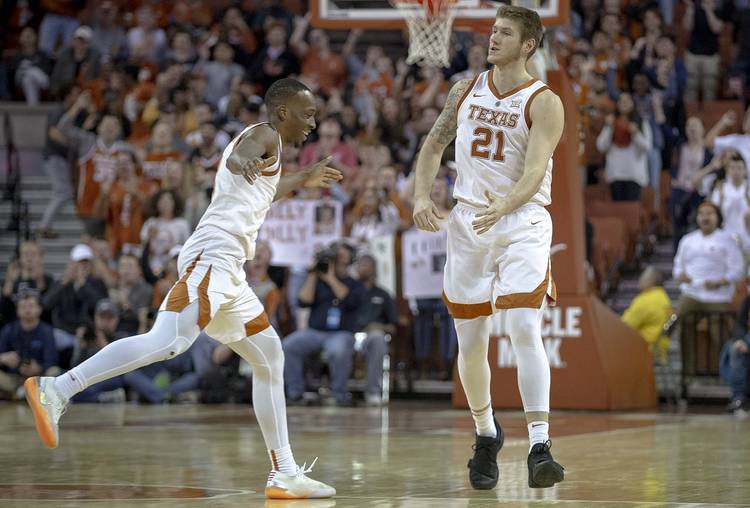 ESPN currently has Texas pegged as a No. 8 seed for the NCAA Tournament, leading to a second-round matchup with No. 1-ranked Duke. Zion Williamson vs. the Longhorns? OK, now we’re talking. Bring on Coach K and the Blue Devils.

Yahoo Sports thinks Texas will be an eight seed, too. A second-round matchup against Tennessee, perhaps? Salute to you, Admiral Schofield. The Vols’ head coach sure looks familiar. Can’t place him, though.

“We can’t worry about it, but it’s human nature to want to look,” UT senior Dylan Osetkowski said. “I haven’t seen any of the supposed matchups, but if you’re a college basketball player, that’s what you want to go do in March.”

March will be miserable if Texas (14-11, 6-6 Big 12) doesn’t buckle down in the final six games of the regular season. Saturday’s matchup against Oklahoma State, tied for last place in the standings, is one that true NCAA Tournament-caliber teams win.

The Longhorns were totally dismissive of the Cowboys (9-15, 2-9) earlier in league play. Coach Shaka Smart’s club played with virtually no energy in Stillwater on Jan. 8 and got whacked 61-58. It was so bad, Smart called it “a significant step back.”

Don’t be fooled by that final score. OSU had a 19-point lead and UT’s frantic finish only made it look respectable. Courtney Ramey missed a potential game-tying shot just before the buzzer.

“The first time, we just didn’t respect them,” sophomore Jericho Sims said. “We didn’t come out with any energy. It was like we weren’t in the game, almost like we were in shoot-around.”

The website bracketmatrix.com keeps tabs on all publicly-shared NCAA projections. On average, Texas is listed as a No. 9 seed with Mississippi, Syracuse and St. John’s.

The Horns rank 35th overall in the NCAA’s new Net Evaluation Tool, or NET rankings. The selection committee will use this ranking that is supposed to measure game results, strength of schedule, game location, scoring margin (capped at a maximum of 10 points) and net offensive and defensive efficiency ratings.

The goal, according to the NCAA, was to design an equal ratings system that better identified what a “tournament-worthy résumé looks like.”

“I really like math, but it’s not something I put a lot of stock into,” Smart said of the NET rankings. “To me, that stuff works itself out if you win your games. That’s where my focus is.”

After Saturday, Texas has three road games and two home games left before the Big 12 tournament. Ken Pomeroy’s basketball analytics site kenpom.com projects Texas to finish 3-3 down the stretch, thus giving the Horns a 9-9 league record for the season. Typically, any Big 12 team that finishes .500 will get into the NCAAs. Texas got into the tournament last year with an 8-10 Big 12 record. Wins over North Carolina, Purdue, Kansas State and Kansas will outweigh losses to Radford and Virginia Commonwealth.

So the Horns are in business, provided they take of business these next few weeks.

“You want to play in March, so it’s hard to not take a look at what people are saying,” Osetkowski said. “But nothing’s set in stone yet, so you can’t go with what these experts are saying.”

Texas should first set a goal of finishing above the midpoint line in Big 12 play. The Horns finished fourth in Smart’s first season but then finished 10th and tied for sixth the next two years.

The top six teams get a first-round bye in the Big 12 tournament at Sprint Center in Kansas City, Mo. That’s critical for any team that wants to win there and build momentum.

In a perfect scenario, Texas would win out. In reality, the Horns should try to get to 19 or 20 wins and possibly play their way into a No. 6 or No. 7 seed, just to avoid a draw that has them playing a No. 1 seed in the second round.

Of course, Texas hasn’t even won a first-round NCAA Tournament game since 2014. No sense putting the cart before the horse.

But that’s what February and bracketology is all about — dreaming up ways to move your team along in the NCAA Tournament.

This weekend, Texas should focus all of its energies on Oklahoma State.

“We’ve just got to bring an intensity of playing highly-ranked teams or great teams like them,” Sims said. “We just have to apply that to this game.”

12 Big Things to know about Big 12 basketball: Big Daddy Bruce and the Wildcats