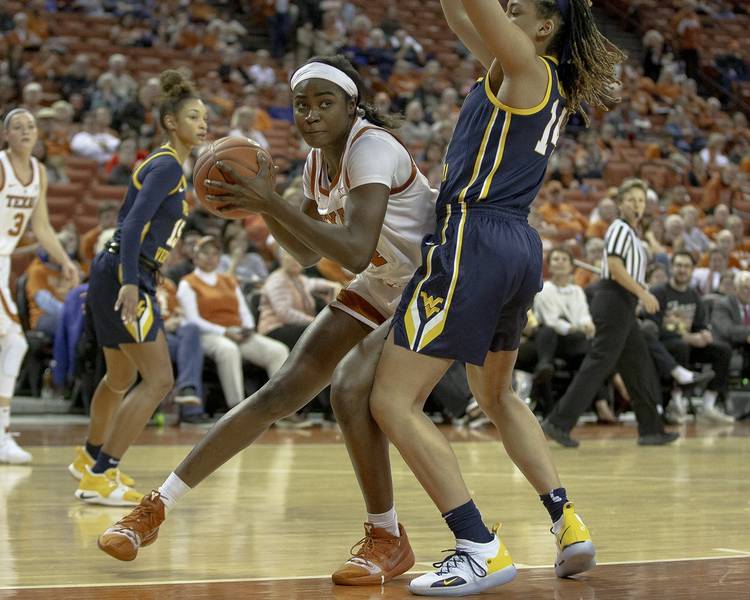 In a 61-55 victory over Oklahoma State on Tuesday, a game Texas desperately needed to win, coach Karen Aston called upon her reserves to save the day.

Charli Collier and Olamide Aborowa accepted the challenge and rescued the Longhorns.

Texas would not have won the game without them, Aston said. When starting center Jatarie White was benched with early foul trouble, the backup post players took up the slack. Collier and Aborowa combined for 12 points and 14 rebounds as the Longhorns improved their conference road record to 6-1.

Advertisement
With just five Big 12 games to play, Texas has a firm grip on second place with a 10-3 league mark. Entering the weekend, Iowa State and West Virginia were a step behind with 8-4 records. The Longhorns will play 6-7 Kansas State on Sunday afternoon at the Erwin Center.

To have any chance for postseason success, the Horns will need healthy contributions from players who are rarely part of the starting five.

“It’s the most important thing for a team that hits their stride at the right time of the year, especially late in conference play,” Aston said of her reserve unit.

“Everybody is keying on your players who have produced the most. Then you have to see if someone else can step up and make some open shots or someone else who can help defensively by covering the other team’s best player. I felt very comfortable with Mide and Charli going in for Joyner (Holmes) and Jatarie (against OSU) because of what they’ve been showcasing lately.”

In recent weeks, one or both of those players have made a difference in the conference race.

Perhaps no player has been a brighter surprise than Aborowa, a senior from Lagos, Nigeria, who contributed a total of 118 points and 118 rebounds during her first three years wearing burnt orange and white. Through 25 games this season, she has 105 points and 86 rebounds.

“There’s a different dynamic to the team this year,” the 6-3 post said. “For us to win this year, it’s going to take everybody.”

Aborowa, who has played competitive basketball for roughly five years, said she has found “confidence in myself” while shooting the ball. Her improvement pops off the stat page.

Aborowa has made 50.6 percent of her shots from the field. By comparison, she shot 25 percent as a freshman, 32.4 percent as a sophomore and 45.7 percent as a junior.

“Mide is embracing the fact that we need her,” Aston said. “Every player wants to be wanted and needed and to feel their roles are valuable, and she knows that.”

Texas 69, Oklahoma State 57: If the Longhorns keep going inside, anything is possible