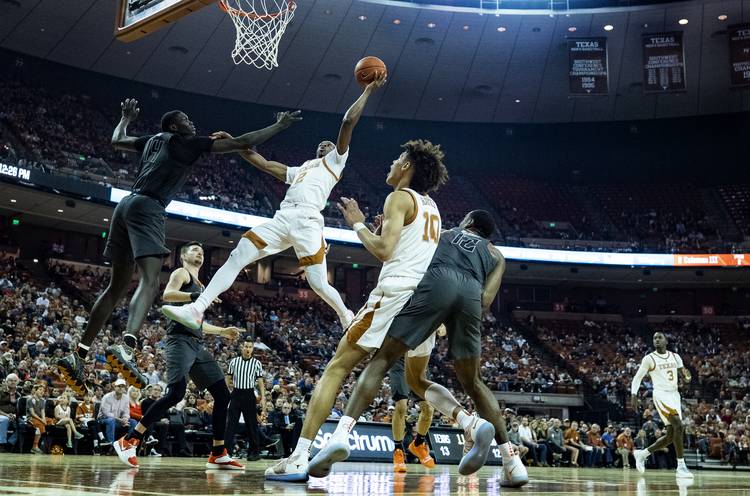 Texas' Matt Coleman III soars to the hoop and draws a foul by Oklahoma State's Yor Anei in the first half of the Longhorns' 69-57 victory Saturday at the Erwin Center. [Rodolfo Gonzalez/For STATESMAN]

Dr. James Naismith didn’t have time to dissect basketball analytics — the mathematical tomfoolery that’s all the rage now. The game’s creator was too busy tacking peach baskets to posts.

But the game has evolved to the point where coaches dissect everything, from zone defenses to the pregame meal.

Here’s a clear case of the analytics being undeniable: Texas is a team that’s far too sporadic from 3-point range but downright dangerous in the paint.

If the Longhorns keep forcing the action inside, they have a much better chance to make more headway in late February and March than if they sit outside and try shooting over everyone.

Saturday’s 69-57 matinee win over Oklahoma State was yet another example of this continuing trend.

Kerwin Roach II had 16 points and scored via a run-out dunk and some crafty layups. Matt Coleman III had 10 points, all coming in close proximity to the bucket or from the free-throw line. Courtney Ramey had a nifty scoop layup that stopped OSU’s 9-0 run in the second half as he finished with seven points.

“We do have some guys who can knock down the outside shot,” Smart said, “but as we’ve talked about, that hasn’t always been our most efficient part of the game.”

Texas shouldn’t abandon the 3-pointer. It’s just that the league’s second-worst 3-point shooting team can’t rely on it day-to-day. Dylan Osetkowski went 3-for-3 from 3-point range en route to 14 points. It was a season high in made 3-pointers for the senior. Jase Febres also hit a couple, and Eli Mitrou-Long hit a key trey.

Overall, the Horns were 7-for-21 shooting from downtown.

The Cowboys (9-16, 2-10) have to bomb away from long range. That’s their best hope of scoring at this point. Coach Mike Boynton’s club is down to seven scholarship players through attrition and disciplinary decisions.

Junior guard Thomas Dziagwa has what Smart called a “neon-green light” to shoot from anywhere at any time. He made a career-high seven 3-pointers and had a game-high 23 points.

“Even on a night when we make eight and still don’t get to 60 (points),” OSU coach Mike Boynton said, “so it’s not like it’s gotten us over the hump, but it gives us our best chance.”

None of this matters if the Horns lack energy. They got off to another lackluster start against the Cowboys, just as they did in the loss in Stillwater on Jan. 8.

This time Smart wasn’t afraid to make early substitutions to get players’ attention. Backups who don’t get much playing time were front and center at the Erwin Center.

Mitrou-Long got 24 minutes, dove on the floor for loose balls and had six points.

“I like diving for loose balls and taking charges,” he said. “It was a fun time today.”

Royce Hamm Jr. also got 10 minutes. In one sequence, he blocked a shot that led to an Oklahoma State shot-clock violation. Then he missed a layup, got the rebound and went back up for a ferocious bucket.

“Every day in practice, he’s one of the hardest playing dudes,” Osetkowski said. “To see him to do what he does in the game, reap the rewards, I love it.”

Once Jaxson Hayes threw down a dunk to give Texas a 29-24 lead, the Horns started to pull away. Texas got up by 11 with 12:51 remaining on Ramey’s 3-point play, and the home team never looked back.

The Horns are now looking ahead. Texas will not play again until next Saturday’s matchup at Oklahoma as there are five regular-season games left.

The Horns have a quite clear, established road map to victory. Question is, will they follow it?

“It has to be a week where we stay focused on what’s on the inside of our team,” Smart said.