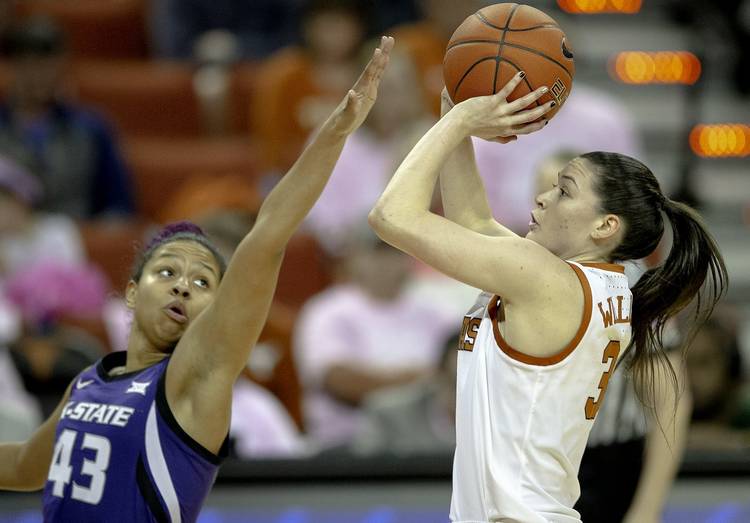 The moment Texas relaxed, Kansas State punched the Longhorns in the mouth.

In a game the Longhorns had no business losing, they took their proverbial foot off the gas. Leading by as many as 14 points in the third quarter, Texas suffered a 69-60 loss to to the Wildcats Sunday afternoon at the Erwin Center.

Advertisement
Coach Karen Aston described the loss as “worrisome.” For a team that just needs to win to earn a decent seed in next month’s NCAA playoffs, the Longhorns were embarrassed in their own building.

“It sucks,” transfer guard Danni Williams said. “Give credit to Kansas State. They executed down the stretch. It goes back to being hungry. Losing is never fun.”

Texas (20-6, 10-4 Big 12) appeared to be in complete command after opening the third quarter with a 16-1 scoring run. The Longhorns turned a 27-26 halftime deficit into a 42-28 lead when Charli Collier banked in a shot halfway through the period.

From that point, Kansas State rocked Texas, finishing the game with a 41-18 run.

Aston offered no excuses, saying the Longhorns “relaxed” and “stopped defending” when the game was still in the balance. Kansas State, which outscored Texas 24-14 in the decisive fourth quarter, swept the season series. The Wildcats beat the Horns 87-69 last month in Manhattan.

The catalyst for KSU’s victory was guard Kayla Goth, who scored 13 of her team-high 15 points in the second half. Ironically, she missed part of the third quarter after a teammate accidentally whacked her on the side of the head.

“I came into the game with an aggressive mentality,” said the 6-1 senior guard, who converted on three of her four attempts from behind the 3-point line.

Coach Jeff Mittie said his team was “resilient” after going down by 14 points.

Aston astutely noted that Texas needed a better post presence to win. The front-court combination of Jatarie White, Joyner Holmes, Charli Collier and Olamide Aborowa combined for 20 points. Holmes, who had played well in recent games, was almost no factor after picking up two quick fouls, finishing with six points and five boards.

With the loss, Texas falls into a virtual three-way tie with West Virginia and Iowa State for second place in the Big 12. While Texas is 10-4 in league play, WVU and ISU are 9-4.

Texas hopes to regain its swagger with a Big 12 games Saturday against Texas Tech. Tipoff is 11 a.m. at the Erwin Center.