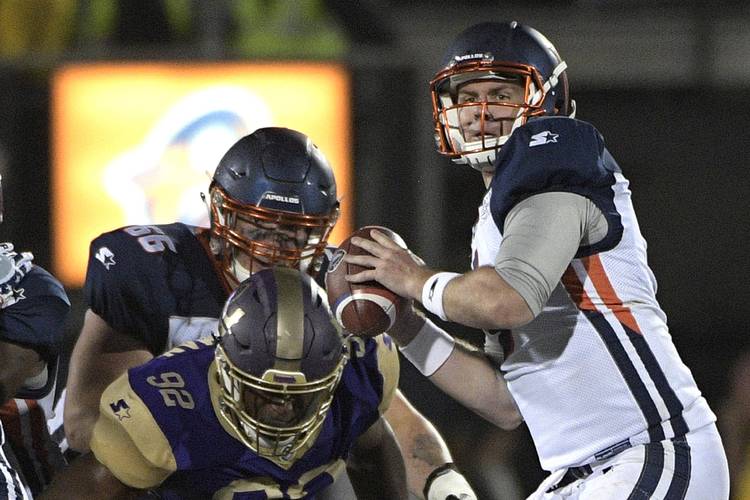 Orlando Apollos quarterback Garrett Gilbert, right, sets up to throw a pass in front of Atlanta Legends linebacker KeShun Freeman (92) during the first half of an Alliance of American Football game Saturday, Feb. 9, 2019, in Orlando, Fla. (AP Photo/Phelan M. Ebenhack)

SAN ANTONIO — Leigh Steinberg, the long-time agent to some of the NFL’s biggest-name quarterbacks, joked Monday that his firm could represent two league MVPs.

There’s Patrick Mahomes, the NFL’s It quarterback, who led Kansas City to the AFC championship game.

And there’s Garrett Gilbert, the 27-year-old former Lake Travis High School star who has played for Texas, SMU and five NFL teams. He has been the most impressive player in the new Alliance of American Football league, albeit through two games.

“It’s been clear to me from college on he has the potential to be a starting quarterback, franchise-type in the NFL,” Steinberg said. “He never really got the opportunity.”

Gilbert, 27, is enjoying a rebirth under the guidance of 73-year-old Steve Spurrier, who introduced the “Fun n Gun” offense to major college football three decades ago.

Spurrier is the coach of the Orlando Apollos and Gilbert is his protégé. The Apollos, down by 12 points in the second half, surged to beat the San Antonio Commanders 37-29 Sunday at the Alamodome.

Spurrier initially tried to establish a running game against the Commanders. The strategy resulted in consecutive three-and-outs to start the game.

Then he told his team he had a “stack of pass plays I’m going to start calling. Throwing deep is what we do best.”

Gilbert threw for 393 yards. No other AAF quarterback has yet to break 300 in the first two games. Gilbert had four completions of at least 50 yards. The yardage wasn’t gained by cheap check downs. These passes were tight spirals thrown deep downfield as a San Antonio rush closed in on him. The Commanders secondary was aggressive and Gilbert had the arm strength to exploit their gambles.

“Garrett is a beautiful passer,” Spurrier said. “When he’s got time to throw, we were making the plays.”

Gilbert was the top quarterback prospect in the country when he signed with Texas in 2009, but he never lived up to that billing with the Longhorns. He started as a sophomore and the first two games of his junior year. But he struggled and was demoted to third team by mid-September. Gilbert had season-ending shoulder surgery, then announced he was transferring.

He played his final two seasons at SMU. His best year was 2013, when he threw for 3,523 yards in 10 starts. He was selected in the sixth round by the St. Louis Rams in 2014, but like so many quarterbacks who were deemed not quite good enough to lead an NFL team, he has drifted between the coasts, working during the week on practice squads, hoping to be active on Sundays. He won a Super Bowl ring for New England as part of the Patriots’ practice squad, but that was a career highlight.

In five seasons, he threw a pass in only one game. Gilbert was working as a coach at a high school in Charlotte, N.C. when the Carolina Panthers called him on Christmas Eve to re-sign him as a backup. The Panthers were down to third-teamer Kyle Allen, a one-time starter at Texas A&M. When Allen was hurt, Gilbert was able to play. His five-year NFL stat line — three attempts, two completions, 40 yards.

During a draft ceremony in Las Vegas on Nov. 27, Gilbert was selected by Orlando in the first round. The eight AAF franchises only drafted quarterbacks. The rest of the player pool was allocated by regions.

Gilbert said he isn’t intentionally trying to use his time in Orlando solely as a last-chance showcase for the NFL. Winning is fun. He’s thrown four touchdown passes. He’s even caught a touchdown pass.

“My goal and my job is to be the best quarterback I can be for the Apollos. And we’ll go from there,” Gilbert said. “If I was worrying about those type of things, I think I’d be getting in the way of my development, and that’s to be the quarterback of this team.”

Spurrier was effusive in his praise for Gilbert.

“He throws a beautiful pass (and) I’ve said it many times, the receivers don’t drop his balls,” Spurrier said. “We made a lot of good, tough catches. And that’s ’cause he throws such a catchable ball, usually a nice spiral on the ball. He’s a natural passer. That’s a gift he’s got.”