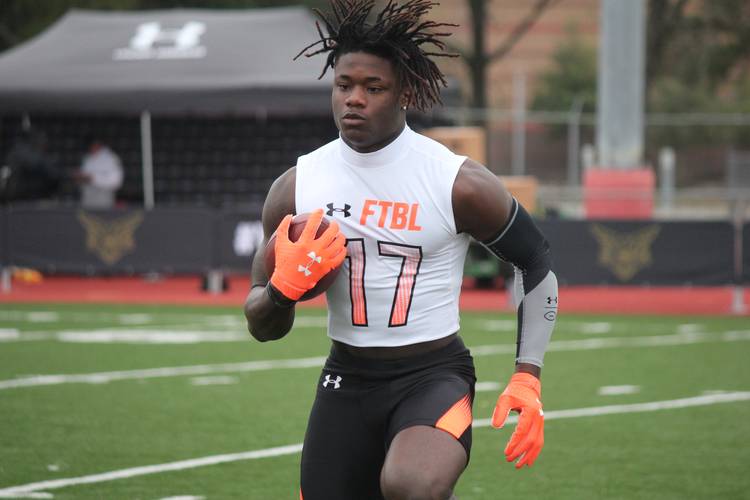 Five-star running back Zachary Evans at the Under Armour camp in Houston. (Mike Craven)

Zachary Evans, Galena Park North Shore’s five-star running back, is the undisputed top prospect in the state for the 2020 recruiting class and the top player in the country, per the 247Sports composite ratings. The 6-foot, 213-pound star is the No. 1-ranked player on the 2020 Fabulous 55 and his 41 offers include the best teams in the nation like Alabama and Georgia — the only two programs that have recruited better than Texas has in the past two cycles.

The Longhorns need Evans. He’s the best player from the state this decade and the type of recruit a program can build around for three years.

Texas missed on IMG Academy’s Noah Cain and Trey Sanders in 2019. It can’t miss on Evans in 2020. The key to Evans’ heart is through the offensive line. He’s made it clear that he’s only interested in programs with talent up front. Evans runs behind a talented group at North Shore and knows what that means to his success, and for the team.

“We don’t win a state championship without a great offensive line and defense,” Evans said after North Shore beat Duncanville in the Class 6A Division I state title game in December. “I didn’t even play a great game, but we won. That’s why I know I need a great offensive line in college. No one does it by themselves.”

Texas is bolstered by plenty of young talent along the offensive line after the 2018 and 2019 recruiting classes. The Longhorns also hold three commitments up front for 2020 and are in the mix for four-star talents Chad Lindberg and Damien George, a teammate of Evans at North Shore.

“I talk to Chad and Damien almost every day. We all have a group chat,” Evans said at the Under Armour camp in Houston on Sunday. “I know those guys are close to the current Texas commits and they’re guys I wouldn’t mind blocking for me, for sure, but it’s too early to know anything like that.”

Evans is in no rush. He knows the destination of his choice awaits no matter his timeline. He plans on enrolling early and doesn’t think he’ll pick a school until the early signing period begins in December. Evans will watch and do research until then, as he plans to narrow his list to six schools soon and then to five when he takes official visits.

“The important part is to not change and remember who you are. I’m getting a lot of offers, sure, but I can only pick one school,” he said. “I try not to listen to the hype. There is still a long way for me to go as a player and I’m not even in college yet.”

Two of the top players in the state not named Zach are Cy Ridge defensive end Vernon Broughton and Fort Bend Austin wide receiver Troy Omeire. Omeire ranks fifth on the 2020 Fab 55, while Broughton checks in at No. 6 as the top-rated defensive lineman in the cycle. Both players were at the Under Armour camp in Houston last weekend and hold Texas offers.

“I’ll take recruiting slow,” Broughton said. “Trying to see what school best fits me. Building relationships with coaches and what the school itself offers. Coach (Oscar) Giles is a cool dude. He’s what I like about Texas the most.”

Broughton is a 6-5, 280-pound defensive lineman who can play end or tackle. He’s a similar player to 2019 Texas A&M signee DeMarvin Leal and is Texas’ main priority along the defensive line. Omeire is a 6-3, big-bodied wide receiver and the top-rated uncommitted receiver in Texas.

“These camps are a great test against great competition. It let’s me know where I’m at,” Omeire said. “Coach (Drew) Mehringer is a cool dude. He’s real and already helps me learn how to use my size as a wide receiver.”