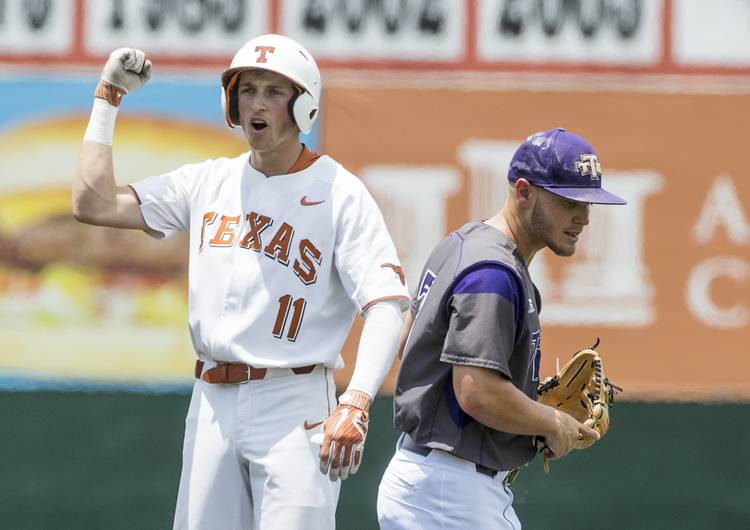 At home for the first time this season, Texas walked away a winner.

Now, we’re talking about actual walks here. Last year, Texas ended three games at UFCU Disch-Falk Field with walk-off homers. But instead of the big bombs on Friday, Texas was boosted by 10 walks in a 7-2 triumph over Purdue.

The victory came one year after the 23rd-ranked Longhorns posted a 32-8 record in their home games.

“I think that we played every aspect of the game right,” freshman shortstop Bryce Reagan said. “The pitchers did awesome, (and we) played solid defense and just put the ball in play.”

The 10 walks drawn by Texas were its most since 11 were distributed to the Longhorns in last March’s 16-3 rout of Northwestern. Friday’s free passes served as catalysts for the UT offense. Six of the seven runners that scored were given a free trip to first base. (The seventh run got aboard thanks to a two-base error by Purdue’s center fielder).

Last year, Texas ranked 15th nationally with the 319 walks it drew over 65 games. Through five games this season, Texas has walked 35 times.

Added Reagan: “I think it’s huge because we have a lot of good bats in our line-up. The more guys we get on base, the better off we’re going to be.”

One week after he pitched a gem in UT’s season opener, Bryce Elder was effective in an encore performance. The Big 12’s reigning pitcher of the week, Elder worked six innings while allowing six hits and three walks. The only run scored against Elder was unearned, so his ERA dipped to 0.64 for the 2019 season.

Elder struck out six batters, the last of which stranded two runners and preserved a 3-1 lead in the sixth inning. The victim of that strikeout was pinch-hitter Justin Fugitt. Earlier in the day, Texas fans noticed that Fugitt was featured on the Purdue website doing the “Horns Down” symbol.

“Bryce went out and did what Friday night starters do, and he gave us a chance to win,” Pierce said. “He did a great job of attacking the zone to a pretty feisty offense.”

Around the bases: Starting this spring, plays can be reviewed and coaches can challenge calls in stadiums where the video technology is available. Texas failed to get three calls overturned by a review on Friday. A successful challenge by Purdue coach Mark Wasikowski did take a nifty double play by Reynolds off the board. … Austin Todd’s two-run triple accounted for UT’s only extra-base hit. … After going without a hit over his first 16 at-bats of the season, UT infielder Masen Hibbeler extended the fifth inning with a single. …  UFCU Disch-Falk Field will host a double-header between Texas (4-1) and Purdue (0-4) on Saturday. First pitch is set for 1 p.m.