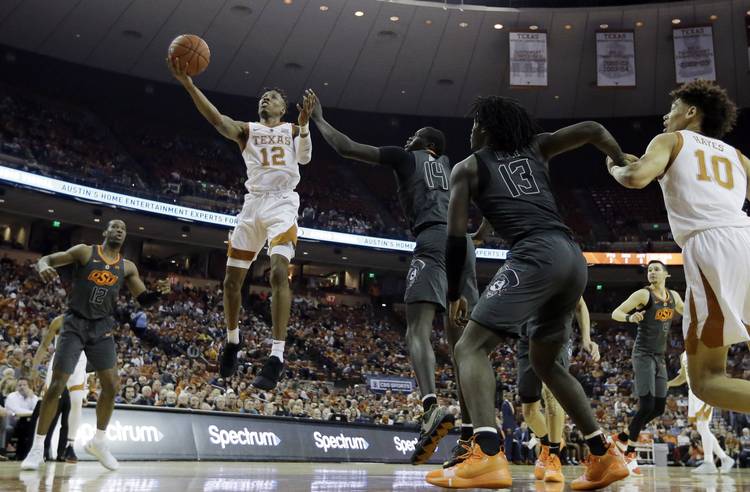 A half-court, buzzer-beater knocked his first Longhorns team out of the NCAA Tournament. The next year, he had to dismiss his leading scorer for being too volatile in the locker room. Last year, the Longhorns’ leading scorer developed a life-threatening illness. And now, with five games left in the regular season, Texas has lost its leading scorer again.

Senior guard Kerwin Roach II, who is averaging 15 points per game, was suspended indefinitely on Friday for an undisclosed violation of team rules just as Texas was preparing for Saturday’s game at Oklahoma.

The school offered no comment other than a terse, one-sentence statement to reporters. Neither Roach nor coach Shaka Smart responded to messages left by the American-Statesman.

Federal privacy laws prevent school officials from commenting on a player’s academic standing, overall health or drug-related matters. Roach was still practicing with the team and was expected to make the flight to Norman even though he wouldn’t play. At this point, it’s unclear whether he’ll wear burnt orange again.

It’s the second time this season Roach has been suspended. He was benched for UT’s two preseason scrimmages and the season opener against Eastern Illinois.

It’s fair to say this caught the basketball program totally off guard. Roach spoke with reporters on Wednesday and talked about looking forward to the matchup with the Sooners (16-10, 4-9 Big 12).

“The season’s ending, you’ve got the urgency, especially being a senior,” Roach said. “We all just want to collect as many wins as we can. We believe in coach, so we’ve got to make that final push and go hard at it and want to get better.”

The Red River rivalry game was supposed to kick-start UT’s push into the postseason. Most NCAA watchers believe the Longhorns are going to be in the field of 68, but nothing is certain until Selection Sunday.

“We’re on the bubble, we kind of know that,” Roach said. “We just want to go out there and prove that we belong in the tournament.”

Throughout the week, there had been a sense of optimism in Cooley Pavilion. This team’s coda still has yet to be revealed. Is this a group that pulls together and finishes in the upper half of the Big 12 and strides into the NCAAs? Or is it a group that stumbles its way to a blah finish and the NIT?

“It’s something we talk about a lot,” Smart said. “To be honest, you’d love to be undefeated but you certainly want to be in position where the most important games you have are ahead of you. You have a chance to go create the season that you want to create.”

Texas had its midweek bye this week and has not played since last Saturday’s win over Oklahoma State. The Horns had Sunday and Monday off and got back to work on Tuesday. The late-week news about Roach let the air out of UT’s balloon.

After Saturday’s game, Texas plays at Baylor (Wednesday), then home against Iowa State (March 2), at Texas Tech (March 4) and home against TCU (March 9). For Texas, all are winnable and all can be lost.

The basketball site Kenpom.com still projects UT to finish the regular season with a 9-9 league record, which should be good enough to get into the NCAAs. That was before the Roach news, though.

In Smart’s three previous seasons, the Horns have been inconsistent near the regular-season finish line. Last year’s team alternated between wins and losses and could not build any real momentum.

“The nature of our sport is interesting in that every game matters, going back to November 6,” Smart said. “But March is the time that is so incredibly important and people remember the most and the most lasting memories are made as a player and coach. That’s what we’re working toward.”

Coach in training: On and off the court, Texas point guard Sug Sutton likes to take charge

Led by Bryce Elder and patience at the plate, Texas records a victory in its home opener