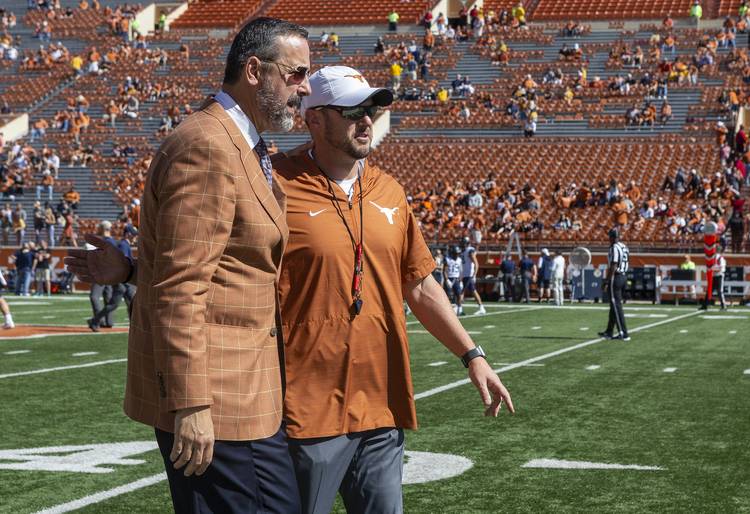 One of Texas athletic director Chris Del Conte’s goals is to streamline UT’s balance sheet and clean up what he believes are perceived mistakes by his predecessors.

In that vein, Texas is no longer actively giving out guaranteed multi-year contracts.

It’s not a new policy and it’s not a dealbreaker. If football coach Tom Herman wanted to hire the right person who requested a multi-year deal, that would be approved. Call it a course correction, according to one person familiar with Del Conte’s thinking.

Asked in January whether he would keep the football staff intact for the 2019 season, Herman said, “Yeah, I hope so. Unless they don’t want to sign it.”

Historically, that’s how Texas did business for decades. Assistant coaches, like other athletics employees, received their one-year appointment letters and were thus “renewed” for the next academic year. The salaries ranged based on position, tenure and overall experience.

“We are absolutely ecstatic with the job coach Tom Herman and our coaching staff is doing for the University of Texas,” Del Conte told the American-Statesman on Friday. “This appointment letter is just a continuation of that effort.”

Former athletic director Steve Patterson changed all that. In 2014, he gave then-coach Charlie Strong and his nine assistants guaranteed multi-year contracts. It was a first in UT history for assistants to get multiple years and unheard of that they’d all be guaranteed. Longtime athletic director DeLoss Dodds never gave blanket multi-year contracts to assistant coaches. He was never given that authority.

At UT, all multi-year contracts or anything worth more than $1 million annually must be approved by the UT System Board of Regents.

Del Conte’s own deal is a good example. UT President Gregory L. Fenves wants to give him a $200,000 raise for a job well done, bringing his annual salary up to about $1.5 million. Even that must be approved at next week’s regents meeting.

But Patterson changed everything for Strong.

“I just hope my football team can come out and play a game like this right here,” Strong said at a men’s basketball game in February 2014 where he introduced the staff to the crowd. “I know with the best coaching staff in college football, that will happen.”

It didn’t. Strong had a whirlwind of assistant coaching changes, leaving UT on the hook for all the guaranteed money that piled up in the process. Each new assistant also got a guaranteed multi-year deal.

When Strong was fired after the 2016 season, the staff alone was projected to cost $4.5 million in 2017. Patterson was also gone by that point, but his replacement Mike Perrin ran business in a similar fashion in giving out guaranteed multi-year deals.

Audited figures show that Texas football had to pay out $7.26 million in severance payments to various former football employees during the 2017-18 athletic year.

Herman’s agent, Trace Armstrong, saw what Strong got and asked for something better, as would be expected. Herman received a five-year guaranteed contract with at least $25 million in guaranteed money, which was somewhat expected as he was the new head coach in 2017.

Herman filled out his staff with coaches who got two-year deals. Knowing how staff turnover helped fuel Strong’s ouster, Herman has been cognizant to keep the staff intact no matter the cost. Orlando got a pay bump after the 2017 season when it appeared other schools wanted to pry him away. Del Conte has said numerous times that “I won’t lose somebody over money.”

Offensive line coach Herb Hand joined the staff prior to the 2018 season when the NCAA allowed for an 10th assistant coach. His three-year deal will come up for renewal after the 2020 season.

12 Big Things to know about Big 12 basketball: A big stretch for three contenders