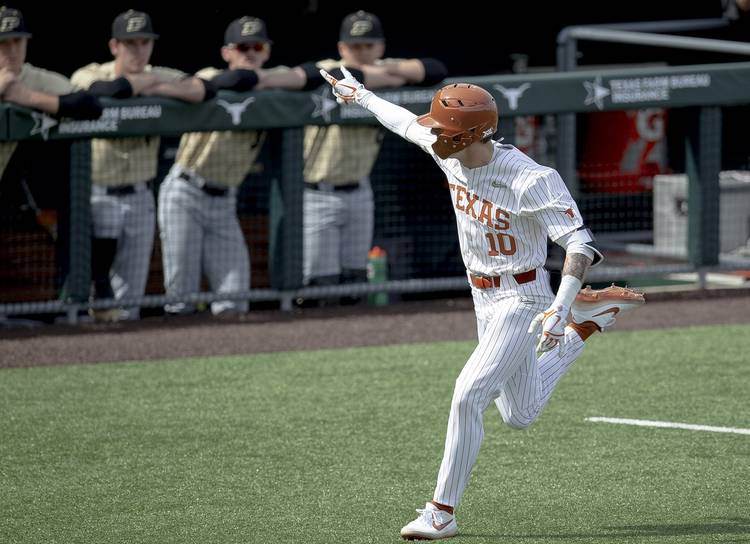 With the 2020 election cycle heating up, the Freshmen Presidents polled well at UFCU Disch-Falk Field on Saturday.

Lance Ford, Eric Kennedy and Bryce Reagan — you can see where UT’s media relations team got that nickname — guided Texas past Purdue in the first game of a doubleheader. Kennedy and Reagan both homered in the 13-6 victory. Ford drove in a run on a sacrifice fly and helped turn two double plays as UT’s second baseman.

Purdue scored three times in the top of the first inning, and Boilermaker starter Ryan Beard retired the first four batters he faced. The Texas offense, though, eventually found its footing. UT erased its early deficit when Michael McCann doubled home three teammates with one out in second inning.

Then the presidents made their campaign stop in Austin.

On the pitch after McCann’s double, Reagan hit the first homer of his career. Two batters later, Kennedy matched Reagan’s feat with another two-run blast to right field.

Saturday’s showcase was only the second time all three freshmen had started in the same game. Reagan, Kennedy and Ford are among the newcomers Texas will lean on this season as it remakes its roster. Earlier this month, UT coach David Pierce said he wouldn’t be looking at these players as freshmen for long.

Texas ended the game with 11 hits and a season-high in runs. Seven Longhorns drove in a run. Sophomore Sam Bertelson scored three times.

That offensive outburst made life a little easier for junior pitcher Blair Henley, who picked up his first victory of the year. Henley hit three batters and surrendered seven hits and four earned runs, but he lasted 6 2/3 innings. An all-conference honoree in 2018, Henley had struggled in a two-inning start last weekend at Louisiana-Lafayette.

This ball was hit v v v hard, @SonofaBertel. Like well over 💯 mph off the bat kinda hard. #HookEm pic.twitter.com/dAozecBWk8

Around the bases: Bertelson’s first hit as a Longhorn was a two-run double that gave Texas a 9-6 edge in the fifth inning. He later added a single. … UT’s third homer of the day was hit by Austin Todd, who leads the team with his 11 hits. … Henley was responsible for four of UT’s eight strikeouts. … No. 23 Texas improved to 5-1, while Purdue dropped to 0-5.