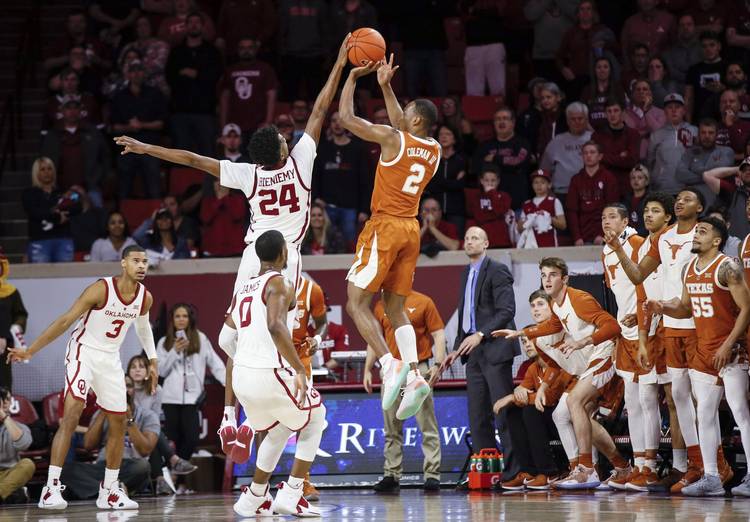 Heisman Trophy winner Kyler Murray was honored during a timeout. OU coach Lincoln Riley was there shaking hands, laughing about that corner blitz and the Big 12 championship. New transfer quarterback Jalen Hurts was soaking it all in, too.

As if that weren’t enough, former OU hoops star Buddy Hield slipped into a baseline seat wearing an OU letterman jacket and cool shades. The fact that the Sooners were up by 17 made it a crimson-and-cream delight.

The Longhorns kept battling. They climbed within nine, then later it was seven. Pretty soon it was three, then two with 53 seconds left. Finally, OU’s Jamal Bieniemy lunged at Coleman and blocked a potential winning 3-pointer as time expired, giving the Sooners a 69-67 victory.

An estimated crowd of 7,229 chock full of OU fans at the Lloyd Noble Center breathed a major sigh of relief.

Instead, the Longhorns fell to 4-9 this season in games decided by six points or fewer.

“I thought our second-half effort was amazing,” Hayes said. “If we would’ve just kept that the whole time, the whole game, we would’ve easily won that game, I feel like. But it’s a 40-minute game, so you can’t just do it for 20 minutes. You’ve got to do it for all 40.”

Texas coach Shaka Smart might lament those last 5 or 6 seconds.

Febres buried a 3-pointer with 53 seconds left to cut OU’s lead to two. Then Dylan Osetkowski got a steal on OU’s next possession. The Horns tried to find Febres again, but he was covered up and missed an off-balance 3-pointer.

OU’s Kristian Doolittle missed the front end of a one-and-one with 5.7 seconds left. Osetkowski got the rebound, and even though Smart had one timeout remaining, the Horns played on.

Coleman brought the ball up, as he’s done in similar last-play situations at Oklahoma State and Kansas. This time, the shot didn’t have a chance.

“I remember seeing (Miles) Reynolds in front of me and Bieniemy was on the side,” Coleman said. “He just used his length and got a hand on it. Just a great defensive play.”

Speaking of great defensive play, there was none to be found in the first half by the visitors. Texas found itself in an embarrassing 17-point hole due to sleepwalking. Maybe these 11 a.m. tipoffs are too much to bear.

OU (17-10, 5-9) was up 11-5 before the pregame smoke cleared. Christian James’ 3-pointer padded the lead. Jamuni McNeace scored off an easy post move, and Osetkowski couldn’t stop Brady Manek from catching an alley-oop pass and throwing down a vicious dunk.

The Longhorns reverted to their normal defensive pressure in the second half and got the ball inside more. They were 12-for-20 on 2-point shots in the second half with Hayes and Osetkowski combining to hit 10 buckets after the break.

“As the bigs, we continually talk about staying aggressive,” Osetkowski said. “But we need to continue to play within the confines of the offense.”

There’s little margin for error for however long Roach is suspended. Smart said the senior, who leads the Horns with 15 points per game, could return this season. When is the question. Roach has been suspended by the university for an undisclosed violation of team rules, which means the punishment is out of Smart’s control.

Texas has four regular-season games left. Based on precedent, it’s strongly encouraged that the Horns at least split those games and finish .500 in league play for NCAA Tournament consideration.