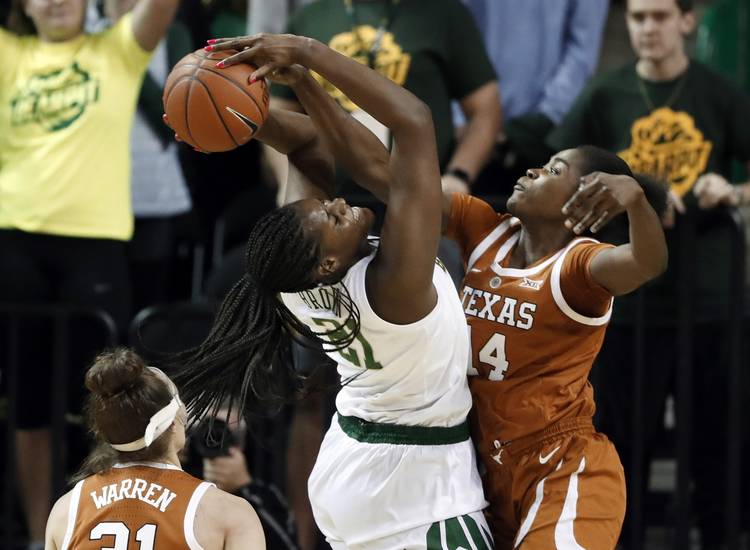 Texas out-rebounded Baylor 46-44 — the first time the Lady Bears have lost the battle of the boards this season — but that was the only bright spot for the Longhorns, whose offense didn’t make the trip to Waco.

Starting guards Sug Sutton, Danni Williams and Destiny Littleton combined for a total of 6 points and 2 assists. Williams, who scored 19 points against Baylor in a 74-68 loss to the Lady Bears earlier this month in Austin, went scoreless, going 0-for-7.

“The difference in today’s game was the passiveness of our guards,” coach Karen Aston said. “That’s inexplainable, as good as they’ve played all year long. … I’m disappointed in that because it’s a game of competitiveness. They’re going to compete for your space on the floor and you have to compete back and we didn’t do that.”

It marked the lowest point total of the year for the 18th-ranked Horns, whose previous low came in a 67-49 loss to Mississippi State on Dec. 2. Joyner Holmes led the team with 9 points. Texas shot just 20.3 percent from the field (13 for 64), hit 2 of 13 behind the 3-point arc and  miserable 7 for 17 from the free throw stripe.

“Baylor plays really good on defense,” Sutton said. “They pressured me, got me out of my game.”

“For three straight years we’ve led the country in field goal percentage defense,” she said. “It doesn’t get talked about very much because I guess it’s ugly. People don’t want to talk about anything but the offensive end of the floor.”

Texas’ downfall coincided when center Jatarie White and Holmes got in foul trouble in the second quarter. With them missing most of the period, Texas went scoreless in the final 7:26 of the half.

After the game, Brown was asked what makes Mulkey such an effective coach.

“She’s rare, passionate, she’s going to tell you what’s on her mind, whether you want to hear it or not,” Brown said. “I’ll tell you one thing, she ain’t for the weak. You better have thick skin and I think that’s what makes me a great player. She sees something that I don’t see. Something I can do better.”