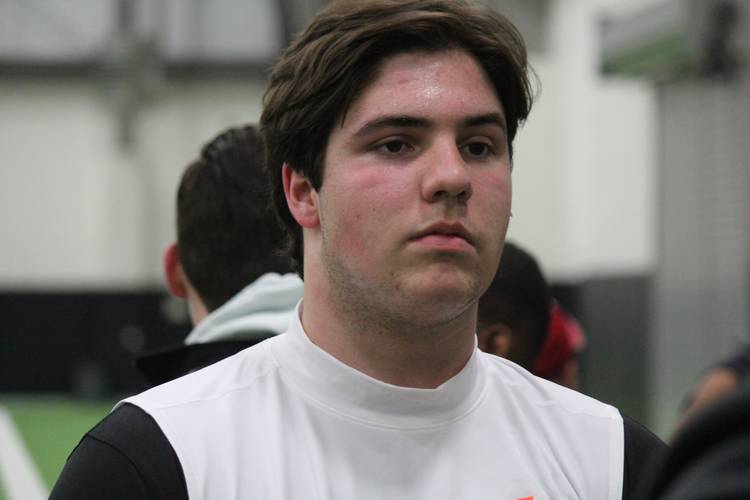 The offensive line is the talk of Texas’ early 2020 recruiting class with three of its five commitments playing up front. Four-star  lineman Jake Majors was the second of the three to pledge when the 6-3, 290-pound prospect chose the Longhorns over Stanford, USC and 13 other offers. The Prosper native plans to play guard or center at Texas.

“Every time I visited, it felt like home,” Majors said Sunday at the Under Armour Camp at Arlington Lamar. “Coach (Herb) Hand is one of the best offensive line coaches out there and it was an opportunity I couldn’t pass up.”

Majors is the No. 27-ranked player on the 2020 Fabulous 55. He’s a big, rangy lineman with the frame to add weight and play tackle or inside at guard. He needs to get stronger, but that’s true of every high school product, especially along the offensive line. He moves well for a player his size and can get to 300 pounds before he steps on campus.

The attention of the Texas staff, and the current pledges, is now focused on two remaining offensive line targets with Texas holding commitments from Majors, Logan Parr and Jaylen Garth.

“We’re hoping to add Damien (George) and Chad Lindberg,” Majors said. “We want to do something special with them part of it.”

Majors plans to visit Texas for the Orange-White game in April and said he is 100-percent committed to Texas, but does still hear from schools, most notably Stanford.

Some of the attention can also shift toward the 2021 offensive line class with the 2020 class on such a roll at the position group. One of the key pieces in the next cycle will be a Longhorns legacy in offensive tackle Tommy Brockermeyer, the son of Texas great and former NFL offensive lineman Blake Brockermeyer. Tommy’s older brother Luke also played at Texas. Tommy already holds offers from teams like Texas, Michigan and LSU.

“It’s been crazy … I’m staying humble throughout the process and enjoying it,” Brockermeyer said Sunday at the Under Armour camp. “It was a great feeling to get my first offer. I’ve been waiting for that my whole life.”

Brockermeyer is clearly familiar with Texas football and is watching the improvements under Tom Herman and Hand with interest.

“Coach Hand is doing a great job,” he said. “There was a big improvement this year and it is only going to go uphill from here.”

Tommy also leans on his father for advice.

“He knows what it takes to be successful and we know there is a lot of work to do for us to get to that level,” he said. “We talk to our dad every day about the process.”