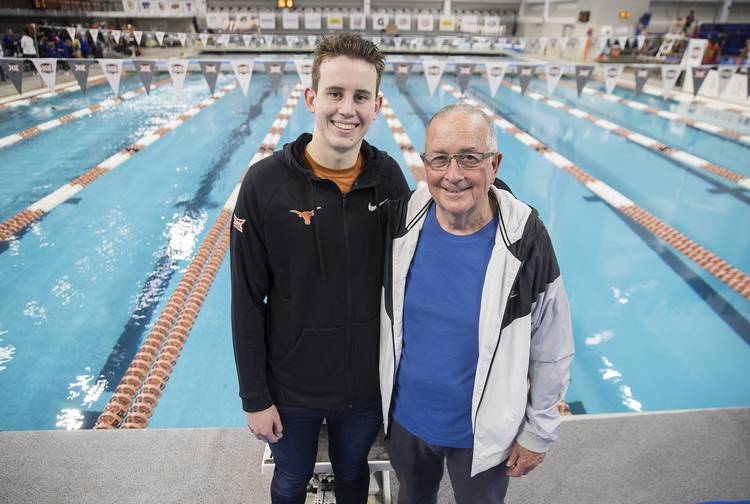 Eddie Reese, the longtime men’s swimming and diving coach at Texas, wants his athletes to refer to him by his first name.

For the most part, that request is accommodated. But Reese has given up on being called anything other than “Coach” by one freshman on this year’s team, who is “way too polite.” Then there’s the case of Luke Bowman, a sophomore swimmer — and Reese’s grandson.

What does a grandson call his grandfather in this scenario? Not many grandsons are solely on a first-name basis with their grandfather. It’s already been established that “Coach” is not an option. Bowman once teased that since “Papa” worked at home, he’d just use that with Reese and maybe the team would follow suit.

“He has not called me (‘Coach’ or ‘Papa’). He just starts talking,” said Reese, as Texas prepares to host the Big 12 championships that start on Wednesday. “I said someday, Luke, you’re going to have to say ‘Eddie,’ which would be fine with me, or ‘Coach,’ and I don’t want ‘Coach’ out of any of them.”

For Bowman, swimming at a school where his grandfather has won 14 NCAA titles has been a dream scenario. His father also attended Texas, so he was raised a Longhorns fan. He attended UT swim camps. Even during Michael Phelps’ heyday, Bowman never shied away from telling grade-school classmates that former Longhorn Brendan Hansen was his role model.

The Houston-area native began swimming when he was five but flirted with other sports. Any chance of playing baseball, however, was dashed after a misjudged fly ball resulted in a broken nose. By the time he reached Cypress Ranch High — where he was coached by his mother, Holly — Bowman was focused only on the pool.

Reese told Bowman after his junior year at Cypress Ranch that his times weren’t yet good enough for Texas. Thanks to training sessions with Hansen, Bowman soon showed signs of improvement on long-course events. A familiar face then offered him a chance to swim for the Longhorns.

“I’ve asked him before and he said he might not have known about me if he wasn’t my grandpa,” Bowman said. “But he wouldn’t have taken me and wouldn’t have offered for me to come here if he didn’t think I was good enough.”

Bowman heard the whispers about nepotism while he was being recruited. His UT teammates, however, have been accepting of his relationship to their coach.

After all, your times are your times. If anything, Bowman has given his teammates a secret weapon since he knows how to distract his grandfather (key words: Sharks, nature documentaries and hunting).  “He did that to me, too,” Holly Bowman said with a laugh. “He has had that role for a while now.”

Bowman said a benefit of this unique relationship is open communication and Reese’s longstanding knowledge of his abilities. For Reese, the pros and cons may be one in the same. “The disappointments are greater and the successes are great, as they should be,” Reese said.

If Bowman is unable to qualify for the NCAA meet, he won’t be out of the pool for long. Swimming is essentially a yearlong sport due to the long-course and short-course schedules. And as for vacation? Yes, Reese makes his grandson swim on family trips.

“Getting better is like being on a two mile-per-hour train. If you ever take a week break and you get off the train, the people you were even with are now ahead,” Reese said. “Nobody in their right mind does this sport. They don’t pick it, it picks them.”