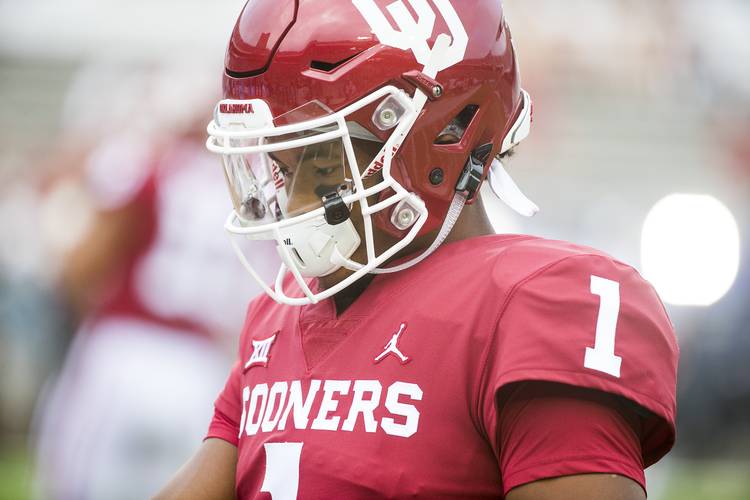 Oklahoma Sooners quarterback Kyler Murray (1) warms up during pregame against Texas Longhorns at the NCAA college football game at the Cotton Bowl Stadium in Dallas Texas on Saturday, Oct. 6, 2018. [RICARDO B. BRAZZIELL/AMERICAN-STATESMAN]

The most talked about plot line of this year’s NFL scouting combine has nothing to do with a clocking in the 40-yard dash or how many times a prospect can push up a 225-pound bar bell.

Rather, it’s about a scale and a tape measure.

Specifically, it’s about how much Oklahoma quarterback Kyler Murray weighs. How big are his hands? And how tall is he?

Murray wowed college football last season with his precision passing, beautiful deep throws and freelance runs. But none of that really matters to a group of coaches and general managers unless they think the diminutive Heisman Trophy winner can survive and thrive the Sunday-to-Sunday grind of the NFL.

Murray’s magic number is 200 pounds. He said last week he weighed 205. If he walks into Lucas Oil Stadium in downtown Indianapolis on Thursday and makes weight, chances are excellent that in late April, he’ll be vying with Ohio State’s Dwayne Haskins as the top quarterback in the draft.

Murray is one of 33 players from the Big 12 who will participate in the combine. OU leads the way with eight players. West Virginia has six and Texas features five.

Murray, who’s from the northern Dallas suburb of Allen, and Houston Cougars defensive tackle Ed Oliver are the two biggest names from the state of Texas who will be participating in Indy. The state has produced the last two No. 1 overall picks — Texas A&M defensive end Myles Garrett in 2017, OU quarterback Baker Mayfield last year.

The Aggies have eight combine participants, half of whom gave up eligibility to turn pro.

The first round is projected to be dominated by defensive players. Ohio State’s Nick Bosa, who missed most of last season after suffering a chest injury in September against TCU, is this week’s best guess as the top choice for the draft, which will be held April 25-27.

Oliver sat atop some mock drafts before last fall. But his stock fell when he missed all or significant chunks of five games because of a knee injury. Like Murray, scouts want to see how much he weighs. He should check in at about 290 pounds.

But after working out in Pensacola, Fla., Oliver’s measurables in the speed and agility drills could vault him back into talk about the top choice. Lance Zierlein, a Houston-based draft analyst for the NFL Network, predicted Oliver could break combine position records for the three-cone drill and short shuttle with times normally generated by the fleeter outside linebackers.

But let’s be honest: The premium players in this year’s draft may be defensive guys, but it’s offense that sells tickets. That’s why Murray is such a hot topic. He’s trying to become the first player to be taken in the first rounds of both the NFL and MLB drafts.

This is where the Big 12 comes in.

Marquise Brown, OU’s big-play receiver, could be the best at his position in the draft. His production fell off dramatically in the final two games because of an ankle injury he suffered against Texas in the Big 12 championship. He had surgery last month but should be ready to work out by early summer.

“I don’t think that will impact his draft position that much,” said ESPN draft analyst Mel Kiper Jr., who’s projecting him to go 12th overall to Green Bay.

Iowa State’s Hakeem Butler would like a terrific combine performance to vault him into the first-round discussion. Steve Smith, an analyst for NFL.com, said of Butler: “At 6-6 and 219 pounds, Butler is a very physical receiver — watching him play is like seeing LeBron James on the gridiron. Butler plays above the rim, and anything thrown his way is a catchable ball.”

Cyclones running back David Montgomery also could be in the first-round discussion if teams follow last year’s trend. There were three tailbacks selected in the first round and five were taken within the first 40 picks.

Montgomery consistently shows up in a discussion about the top three tailbacks.

“He is just fun to watch,” Jeremiah said. “He’s one of my favorite players in this draft. I go back through my list … and I try and go through and highlight four or five guys at every position that I just kind of like — these are my kind of guys, and if you’re running a team, I’d want somebody like this, the way they play the game with the passion, the toughness. There’s just something about them, I’d want them on my team, and David Montgomery is one of those guys.”

OU offensive guard Cody Ford also could be a first-round type. Kiper lists him as the top guard in the draft. The Sooners likely will have four offensive linemen drafted.

The Big 12 also could have some defenders among the first three rounds.

Jeremiah mentioned that TCU defensive end L.J. Collier could be an option for Oakland near the end of the first. The Raiders have three first-round picks. This year’s draft also is top-heavy with defensive ends and tackles, so if there’s a run on the position, that could benefit Texas’ Charles Omenihu. He’s considered the 10th best end, according to Kiper’s rankings.

Still, Murray, the brightest offensive star in the country last season, should be the combine’s rock star if he does more other than weigh and measure. His on-campus pro day is March 13.

“Murray will be the most watched man in Indianapolis,” Kiper said. “I’ve said several times that he’s one of the most dynamic dual-threat quarterbacks I’ve ever seen. Murray won’t be for every team and every system, but if he lands in the right spot, he could be a star.”

Notable prospects from the Big 12 and the state who will be at the NFL scouting combine, with comments on their draft situations.