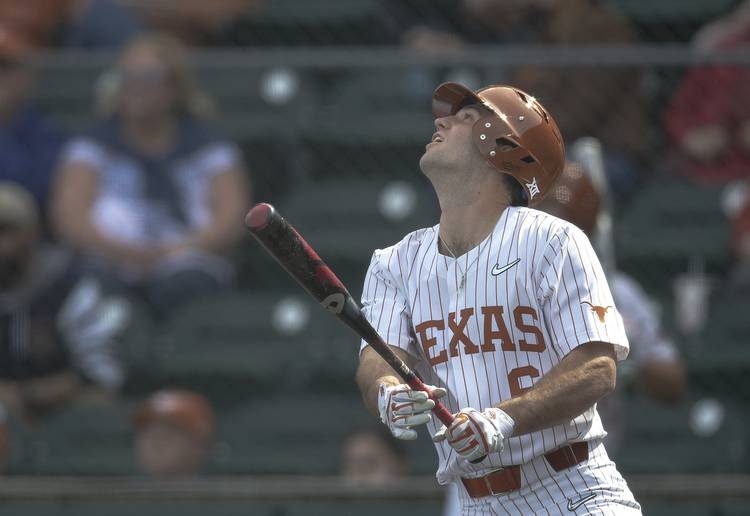 Texas played the role of the coyote in a surprising 10-7 loss to UTSA’s Roadrunners on Wednesday night.

UT sprinted out to a 6-0 lead at UFCU Disch-Falk Field, but its guests later sent 12 batters to the plate during a decisive fifth inning. Supported by an eight-run fame, UTSA (6-3) rolled to its fourth win in Austin in 124 tries. The 22nd-ranked Longhorns, meanwhile, slipped to 7-3 with a three-game series against No. 2 LSU that starts on Friday.

The fifth-inning performance was one of UT’s worst in Pierce’s three years at Texas. During last year’s College World Series, the Longhorns also surrendered eight runs to Arkansas during a sixth inning that featured a three-hour weather delay.

“I think we just kind of lost focus in that inning,” said sure-handed third baseman Ryan Reynolds, who committed one of the errors. “You can always play good defense. That was kind of uncharacteristic for me and for the other guys on this team, too.”

The defense continued to flail after surrendering its lead. In the sixth inning, a Roadrunner tagged from third base and scored when freshman catcher Caston Peter dropped a strike thrown from right fielder Duke Ellis. One inning later, a dropped foul ball led to another unearned run.

The Longhorns entered Wednesday with a .971 fielding percentage that ranked 103rd in the country. Four errors on Wednesday led to four unearned runs. Texas has committed at least one error in eight of its 10 games.

Defensive miscues weren’t UT’s only problem, though. Seven pitchers combined to issue a season-high 10 walks. Two of those walks (and a hit batter) were credited to freshman Owen Meaney, who was starting for the first time. The right-hander from Houston didn’t allow a hit, but lasted only three innings due to his control issues.

“He had three free passes, and I’m not going to put up with free passes,” Pierce said. “These guys are going to have to learn how to pound the strike zone. (UTSA) didn’t hit a single home run tonight, we gave them everything. As long as they go out there and do that, they’re not going to pitch.”

Around the bases: Both Zach Zubia and Tate Shaw homered for Texas. … Reynolds led UT offensively with three hits, two runs and two RBIs. … The loss was UT’s first in a mid-week game at home since 2016. … Slater Foust, who graduated from nearby Liberty Hill in 2016, closed out the game for UTSA. He gave up three hits and an unearned run over two innings.