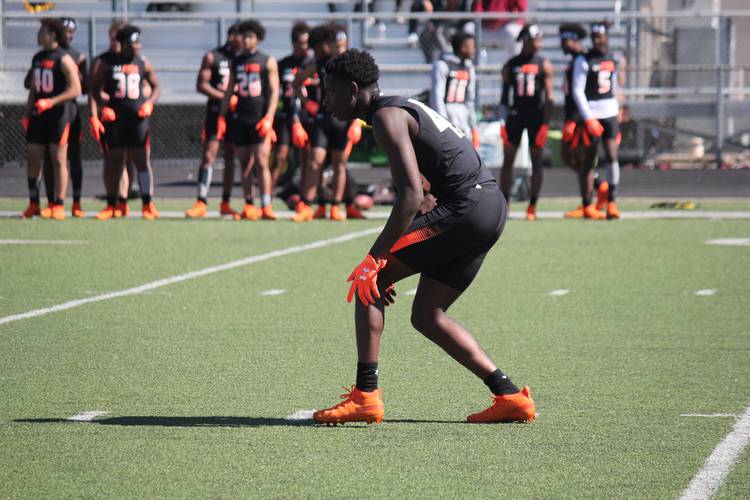 Texas struck burnt-orange gold in the 2018 recruiting class when it signed the top three safeties and top two cornerbacks in the state, a group that included Caden Sterns, B.J. Foster and Anthony Cook. That group is already paying dividends and is sure to make more of an impact as sophomores, but it isn’t too early to start recruiting the future replacements.

With March here, the shape of the potential defensive backs class is becoming clear. The Longhorns signed two corners and two safeties in 2019. Expect Texas to lock in on three prospects at each position in an ideal class where momentum is on Tom Herman’s side early in the cycle.

Here are where things stand with the top targets.

Eaton was back on campus for the second weekend in a row with three of his Fast 7v7 teammates. He received a UT offer while attending junior day and returned with safety targets Bryson Washington and Xavion Alford to get more individual attention and information about the program.

Eaton is a fast-rising prospect with elite offers from the around the country. It’s clear Texas is a team to beat in his recruitment and he’ll likely move into borderline four-star range when rankings are updated on the recruiting sites.

Watts is a long, rangy corner with an impressive offer list. He named Texas as one of his favorite schools at the Under Armour event over the weekend in Dallas and mentioned his recent trip to Austin for junior day as one of the best visits he’s taken in the recruiting process. Texas wants a larger imprint in the Dallas-Fort Worth area and locking down a prospect like Watts sets a ton for the program.

Ringo is the jewel of the secondary targets. Texas’ success recruiting in Arizona in the 2019 class can’t be ignored when discussing Ringo. The Longhorns spent a ton of time in Arizona reeling in Scottsdale’s Jake Smith and Chandler’s Brayden Liebrock. The staff made sure to include visits to Ringo during those trips. Ringo mentions Texas among the programs he’s considering for an official visit and that’s good news for the Longhorns. If he were a Texan, he’d the the state’s top cornerback.

Thompson is one of two key targets from Duncanville. He’s a big, physical safety prospect who spent most of his junior season playing outside linebacker for a program that reached the Class 6A Division I state title game. He was out of position, but it proves his versatility, and that’s a trait the Texas defensive staff covets in defensive backs. Thompson mentioned Texas as an early leader at the Under Armour camp on Sunday.

Washington was among the trio of defensive backs to visit Austin with Fast 7v7 and he’s a long-time target of safety coach Craig Naivar. Washington is a bigger safety capable of playing the Joker position like Foster did as a freshman. He possesses the frame to be a true difference maker in run support and he’s among the fastest safeties in the state.

Alford also was in town with his Fast 7v7 crew and has family ties to Longhorns legend Vince Young. He’s the most versatile safety in the state. He can play deep safety or nickel, which means he can fill two positions with one scholarship if the Longhorns can beat out in-state rivals Texas A&M and a host of national programs.

With No. 2 LSU’s big bats in town, Texas third baseman Ryan Reynolds is rising to the defense