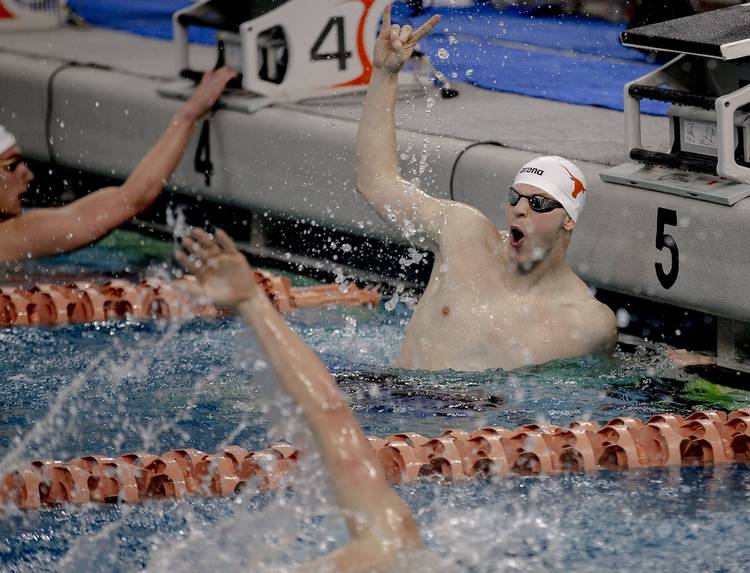 For Ryan Harty, his swimming career can be divided into what happened before and after he decided to kill time by climbing a tree.

Two-plus years ago, Harty and some of his Texas teammates were awaiting a ride outside their dorm. They were headed to Barton Springs to host several recruits.

Harty scaled a tree as he waited for their ride. When the car arrived, Harty slipped and fell backwards from 13 feet. He broke both elbows and a bone in his left wrist when he hit the ground. He spent five days in the hospital to recuperate and missed all of the 2016-17 season.

On Friday night, Harty broke a Big 12 Conference record in winning the 100-yard backstroke, an event he decided to add after his elbow injury.

“This feels good,” Harty said. “I was excited just to get my hand on the wall.”

Harty out-touched his best friend, John Shebat, for a time of 45.19. That lowered the previous record of 45.41, which was set by West Virginia’s Andrew Marsh at the 2016 conference meet. Longhorn Austin Katz was third.

For context, Shebat has been the NCAA runner-up in both backstrokes the last two seasons.

Thanks to swims like Harty’s, both the Texas men and women’s swimming and diving teams are poised to win Big 12 titles Saturday night. That’s when the meet concludes at the Texas Jamail Swim Center.

The Texas women lead Kansas 773.5 points to 466.5. The Longhorns are looking for their seventh-straight conference title. The UT women, which were undefeated during dual meet season, are ranked second nationally.

Both Longhorn teams have the luxury of competing at home without worrying about losing a team trophy. They’ll start to taper their workouts so that they can be fresh for the NCAA meet. Both the men’s and women’s championships will be in Austin. The women are scheduled for March 20-23. The men’s meet is March 27-30.

In other Big 12 highlights:

Townley Haas, the American record holder, won his fourth straight 200 freestyle. His victory wasn’t a surprise. He’s won the last three NCAA titles in the race. But he was pushed a bit by freshman teammate Drew Kibler.

Haas swam a time of 1:32.42, which currently is the sixth-fastest in the country. Once he’s fully rested, he’s fully rested, his times should approach his American record of 1:29.50 that he set 11 months ago. Kibler was .60 behind Haas Friday night.

Longhorn senior Joanna Evans won the women’s 200. It’s her second individual title of the meet. She was sick this time a year ago and was diagnosed with mono after the Big 12 meet.

On the men’s side, senior Max Holter won the consolation final in the 100 fly. His time of 46.15 would’ve won the event. But Holter wasn’t eligible to score points. Teams can have only 18 participants at the conference meet.

Evie Pfeifer successfully defended her conference title in the 400 individual medley. And UT freshman Braden Vines earned the title in the men’s 400 IM. He was third Thursday in the 200 IM.

Claire Adams, who was named women’s swimmer of the year last season in the Big 12, won the 100 back to lead a Longhorn sweep of the top three spots.

And in men’s diving, Grayson Campbell and Jordan Windle finished first and second on the 3-meter springboard.