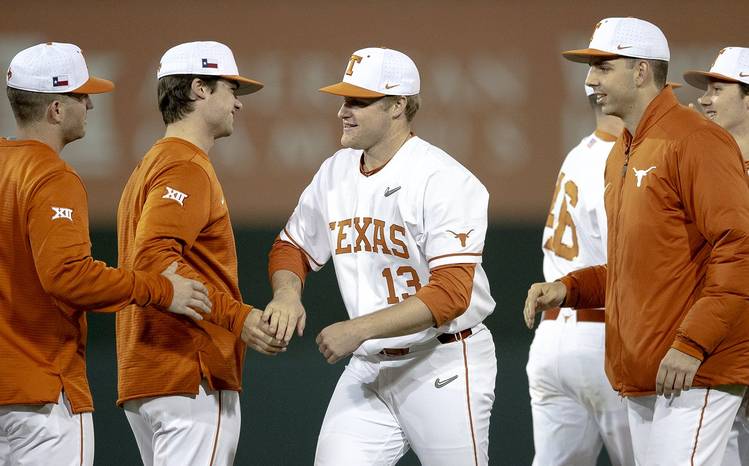 Texas opened a daunting month on its calendar with an 8-1 win over LSU at UFCU Disch-Falk Field on Friday. In the seven-run conquest, Texas shook off a sluggish start on offense and had sophomore Bryce Elder once again look the part of the ace.

“I wouldn’t call it a statement. Our guys, we’ve got some young guys in there that realize they can play with anybody in the country,” Texas coach David Pierce said. “I think that’s big for our confidence.”

LSU struck first after Zach Watson singled with one out in the first inning and then moved around the bases on an errant pickoff attempt and two wild pitches. Elder conceded that he “tried to make a few pitches too good” at the beginning of the game, but he soon settled down.

Elder’s ERA dipped to 0.44 after he allowed four hits and that unearned run over a start that lasted 6 2/3 innings. He registered seven strikeouts, the biggest of which left Tigers at second and third base in the fifth inning. The victim of that highlight — LSU right fielder Antoine Duplantis — entered the game with a .457 batting average, 23 RBIs and no strikeouts.

“I really didn’t change my approach (after the first inning),” Elder said. “I was going to go out and try to go pitch-by-pitch and make the best pitch I can to each hitter. I just kind of got into a groove and stuck with it.”

Said outfielder Duke Ellis of Elder: “Like I say every time, he awes me.”

Sophomore Kamron Fields took Texas to the finish line, allowing no hits and two walks over the final 2 1/3 innings. LSU had been ranked fourth nationally in both batting average (.346) and scoring (11.5 runs per game).

When Fields was called from the bullpen, Texas was clinging to the 3-1 lead it had built off Ellis’ two-run homer in the fourth frame. The UT offense, though, erupted for five runs after the seventh-inning stretch. The late-game outburst was a positive sign for a team that stranded five runners in scoring position over the first three innings.

“It’s just good that we just continue to grind out at-bats,” Pierce said. “A lot of good things happened offensively.”

Between March 1-24, Texas has 15 games scheduled against teams currently ranked in the D1Baseball poll. Texas is set to travel to No. 11 Stanford for four games next week, and UT’s first six conference contests are against No. 3 Texas Tech and No. 18 TCU. Texas has also set two home dates with No. 16 Arkansas from March 19-20. One of the two unranked opponents that UT will play during that 24-day stretch is a Texas Southern team that reached last year’s NCAA tournament.

Pierce said earlier this week that he wants UT’s schedule to feature balance and RPI-boosting challenges. He added that “we’ll continue doing that with some strategic moves within that.” Getting LSU to the schedule was Pierce’s call. The third-year coach inherited the Stanford series.

Around the bases: An announced crowd of 7,680 was the 14th-largest in the history of UFCU Disch-Falk Field. … The NCAA’s leader in walks ahead of this weekend, Ellis was given two additional free passes on Friday. He has walked 18 times this season. … UT senior infielder Masen Hibbeler, who had two hits over this season’s first 24 at-bats, went 2-for-4 with two runs and two RBIs. … A Fredericksburg native and the son of former Texas punter Rainey Threadgill, LSU freshman Riggs Threadgill struck out one Longhorn over an inning of relief.