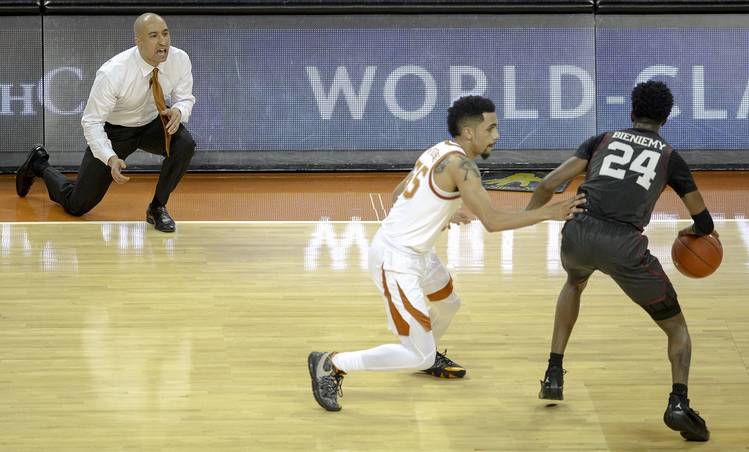 If Texas somehow stumbles down the stretch and ends up not getting selected for the NCAA Tournament, late-game execution this season will be the primary reason why the Longhorns miss March Madness.

This team has made some excruciating errors at the exact wrong moments.

“All I know as a coach is to keep fighting and working to go grab that one play,” coach Shaka Smart said after the latest disappointment, Wednesday night’s 84-83 loss at Baylor.

Texas (15-13, 7-8 Big 12) is a textbook NCAA bubble team heading into Saturday’s home game against Iowa State (20-8, 9-6). If the Horns somehow lose all three games remaining in the regular season, they’ll likely end up in the NIT.

Coaches are supposed to earn their multi-million dollar salaries and burnish their reputations in close games. Smart’s club is 4-10 this season in games decided by six points or fewer. He’s 23-33 in two-possession games in four seasons at Texas.

This team is in danger of finishing in the bottom half of the Big 12 standings for a third straight season. Depending on how other teams finish, it’s not clear whether UT would earn the last first-round bye for the Big 12 tournament. Teams that finish seventh through 10th have virtually no chance to win four games in four days in Kansas City.

In close games this season, Texas simply hasn’t pulled through.

Against Oklahoma State, a timeout was called with 10 seconds left as UT trailed by three. Matt Coleman III and Courtney Ramey got jammed on their spacing, and Ramey ended up missing a potential game-tying 3-pointer.

Against Kansas, a timeout was called with five seconds left as UT trailed by two. Kerwin Roach II was supposed to stay in the right corner, but he rushed up the floor thinking Coleman was in trouble. Jase Febres missed an off-balance 3-pointer.

“Close one. Just got to finish it off. No moral victories,” Roach said afterward.

Against TCU, a timeout was called with 12 seconds left as UT trailed by three. Elijah Mitrou-Long felt trapped on the right wing and, with two Longhorns standing a few feet away side-by-side, fired up a 3-pointer that hit the top of the backboard.

“We just didn’t have enough sparks — guys that go into the game that give us a spark — in terms of energy,” Smart said afterward.

Against Oklahoma, Smart opted not to call timeout with five seconds left as UT trailed by two. Coleman rushed up the floor but his potential game-winning 3-pointer was blocked by Jamal Bieniemy.

“He just used his length and got a hand on it. Just a great defensive play,” Coleman said afterward.

Wednesday against Baylor, a timeout was called with nine seconds left in a tie game. Jaxson Hayes caught the inbound pass but  shuffled his feet and was called for traveling. The Bears got two free throws with three seconds left and won in overtime.

What made this loss even harder to swallow was Texas had run up a 19-point lead with 14:49 remaining in regulation.

“That’s just a heartbreaker,” Smart said afterward. “Baylor deserves a lot of credit for the way they battled back.”

Viewed in one-game installments, each can be dismissed as a tough break, bad luck or it just wasn’t UT’s night. Viewed collectively, it’s quite troubling. The Horns have a history of playing tight games against the Cyclones. Four of the last five games in this series have been decided by five points or fewer.

Texas is not expected to have Roach, the senior guard who’s the team’s leading scorer but is still on an indefinite suspension for an undisclosed violation of team rules.

After Saturday’s game, Texas will travel to play at Texas Tech at 8 p.m. Monday. UT closes out the regular season on March 9 at home against TCU.

12 big things about Big 12 basketball: We’re in the endgame now