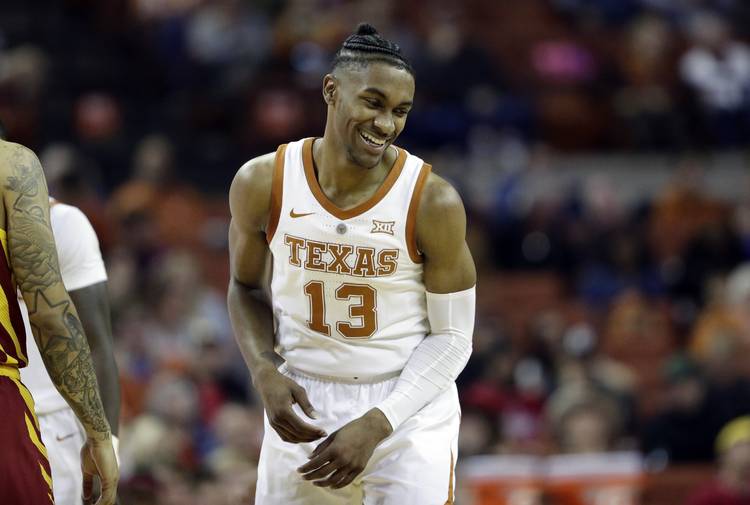 Blowing a 19-point lead can leave quite a psychological scar.

Granted, what happened Wednesday seems like eons ago for today’s college basketball athletes. Heck, whatever happened at breakfast is old news by lunch.

Asked about the Baylor loss, Texas freshman Courtney Ramey shot back, “You can’t dwell on the past.”

Bulletproof confidence is not exactly what UT coach Shaka Smart saw in the early going Saturday against Iowa State, though.

“Our guys, I thought at the very beginning of today’s game, you could see a little bit of residue,” Smart said. “We got in that first huddle and said, ‘Uh-uh, guys, we’re not having it.’ ”

Elijah Mitrou-Long broke open a tie game with a 3-pointer, then Jase Febres hit two treys before halftime and one more just after, and suddenly Texas was off and running. Febres finished with a career-high 26 points, and Courtney Ramey added 18 in what became an 86-69 blowout.

“Honestly, I had a lot of open looks that I had to knock down,” Febres said of his career-high eight made 3-pointers. A lot of those passes came from Matt Coleman III, who had 10 assists.

Febres was 8-for-10 from long range and 9-for-11 from the floor overall. That lone 2-pointer was a rather nifty pump-fake, step-in 17-footer.

Febres has made at least five 3-pointers in each of the past three games. Smart called Febres a “volume” shooter, and that is undeniable. It was the first time a UT player had hit eight 3-pointers in a game since A.J. Abrams drilled that many against Minnesota in a 2009 NCAA Tournament win.

“That’s the one thing he does. He shoots at a high level,” Iowa State coach Steve Prohm said. “He’s not a one-dribble, pull-up guy. He’s a catch-and-shoot-3 guy.”

Speaking of the NCAAs, Texas (16-13, 8-8 Big 12) should feel better about its postseason chances. But the Longhorns have no reason to let up until at least securing a .500 or better finish in league play.

Texas will close out the regular season next week with a trip to Texas Tech on Monday and the home finale against TCU on Saturday.

“Obviously, March is the best season or best month of the year for college basketball players,” Mitrou-Long said. “Anything can happen at any given time. I feel like taking one step at a time, one game at a time, one possession at a time, it’s just going to help us.”

Febres will get all the attention for shooting down the Cyclones (20-9, 9-7). It’ll be well-deserved. But credit Mitrou-Long for truly kick-starting things with about 4 minutes left in the first half.

His 3-pointer from the right wing gave Texas a 26-23 lead. Then he got in the lane and found Ramey under the basket for a pocket pass that led to an easy layup.

On the next possession, Mitrou-Long was in the right place at the right time to rip the ball away for a steal. The Horns went the other way, and Mitrou-Long threw a lob pass to Jaxson Hayes for a jam.

Febres closed out the half with two 3-pointers, and Texas had a 38-26 lead at the break. The Cyclones managed only three points in the final 4:55 of the first half.

The second half was an offensive monsoon. Febres scored, Dylan Osetkowski (13 points) scored twice and Ramey drilled a 22-footer. Then Ramey had good spin move in the lane and scored again, giving Texas a 53-30 lead.

When Coleman hit long jumper with 10:57 remaining, Texas had a 20-point lead. That’s an even bigger cushion than the Horns had with 14:49 left against the Bears. It melted away that night in Waco as Texas lost in overtime.

Was this going to be Baylor all over again, or had the Horns learned their lesson?

Iowa State tried to make some noise, but Mitrou-Long’s 3-pointer and another one from Febres finished things off. No need to sweat this one out. Texas fans got up and headed to the exits at the final media timeout with just under 4 minutes remaining.

Jaxson Hayes played only 19 minutes and was benched as a precaution after getting hit in the face. He should be cleared to play against Texas Tech. There was no update on guard Kerwin Roach II, who is still suspended for an undisclosed violation of team rules.

Now the Horns can go through the rest of the weekend feeling good and get geared up for the final week.

“The most heartening thing about today was our guys’ resolve,” Smart said.

No. 22 Texas takes early lead, moves step closer to sweep of No. 2 LSU