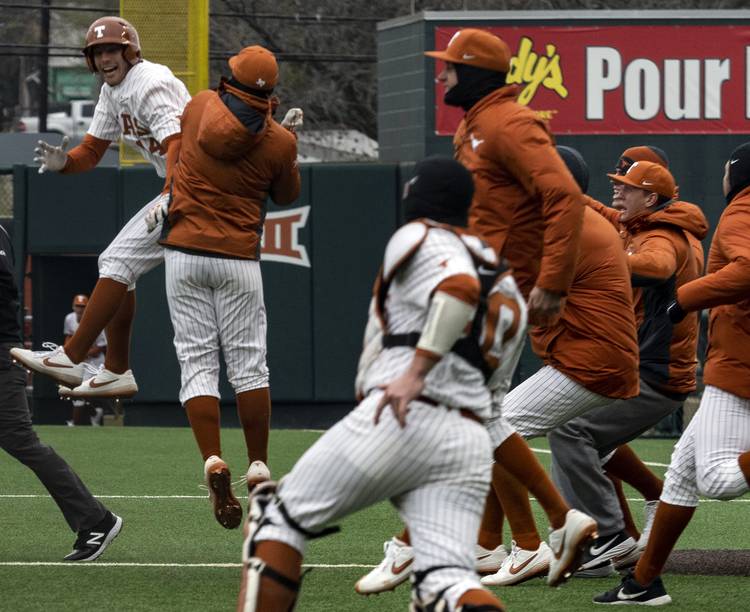 One day after a brutal loss to UTSA on Wednesday, Texas coach David Pierce gathered his players, dumped the notes and boxscores from the  10-7 defeat into a bucket and lit them on fire.

The fiery stunt during Thursday’s practice relaxed the Longhorns. “It really forced us to let it go,” senior catcher Michael McCann said.

And let it go, Texas did. The Longhorns bounced back from their midweek stumble with three weekend wins over No. 2-ranked LSU. The series sweep came with a 7-6 victory on Sunday capped by Austin Todd’s walk-off single at UFCU Disch-Falk Field.

After eight innings at a chilly ballpark, it appeared that Texas would just have to be content with taking the first two installments of the three-game series. LSU (8-3) built a 6-4 lead in the finale and had closer Todd Peterson on the mound in the ninth inning. But Texas rallied.

McCann led off the final frame by selling that he was hit by a Peterson pitch — “You’ve got to do what you’ve got to do,” he said slyly — and then Masen Hibbeler singled. Lance Ford, who had entered the game in the top of the ninth, bunted his teammates into scoring position. Then Duke Ellis drove in a run on an infield single, and Texas tied it when LSU botched a double-play grounder.

Austin Todd walks it off for Texas.

That brought Todd to the plate. He saw two sliders, sneaking the second one past the 6-5, 230-pound Peterson and into center field. Ellis scooted home from second and the Longhorns celebrated a successful weekend.

“I knew I hit it pretty hard,” said Todd, who also homered. “He was pretty big, so I didn’t know if (it) was going to hit him. Luckily, it got through.”

The walk-off was the second of Todd’s career. Last February, he ended a 5-3 win over Louisiana-Lafayette with a two-run homer. In the 378 days between those highlights, Todd battled shoulder and thumb injuries.

“I feel so good for that guy,” McCann said. “He’s gone through some adversity, like we all have. When he gets in the box, I think everyone in the dugout and on the field feels a sense of confidence.”

Texas was victorious despite committing three errors and throwing four wild pitches. The Longhorns needed to use five pitchers. Freshman Ty Madden threw two innings of perfect relief and was credited with the win.

“Today wasn’t pretty,” Pierce said. “At times it got ugly, but the thing that was impressive is that we never gave in, we continued to play the game and put ourselves in an opportunity to win it.”

Around the bases: Freshman Mason Bryant stuck out four batters in 1 2/3 innings. The McCallum graduate inherited a bases-loaded situation with one out in the sixth inning, which led to two runs. … One of Ryan Reynolds’ team-high three hits was an RBI double in the eighth. … The third, fourth and fifth batters in LSU’s batting order were 0-for-13. Ahead of Sunday’s game, all three were batting at least .320. … Before traveling for four games at No. 11 Stanford, Texas will host UT-RGV on Tuesday.

Texas Tech, closing in on Big 12 title, must get through Texas on ‘Big Monday’