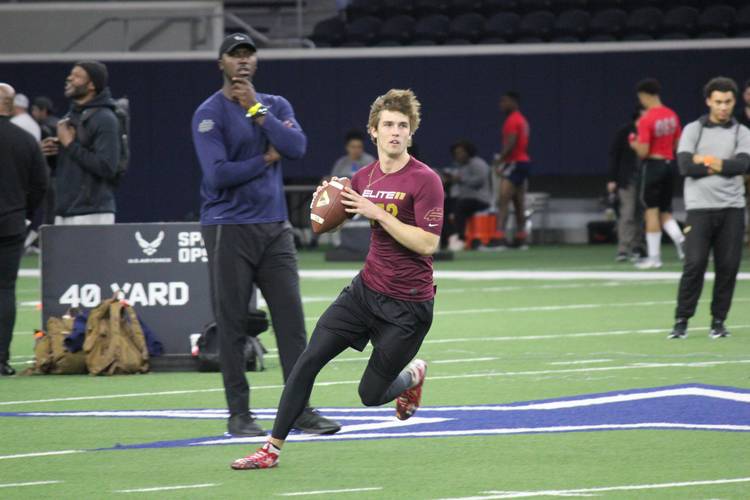 FRISCO — Hudson Card always was going to be a Longhorn. The four-star quarterback from Lake Travis committed to Texas last May and is one of five members of UT’s 2020 recruiting class. The 6-2 dual-threat quarterback earned an invitation to the Elite 11 event with a strong performance Sunday at The Opening regional at The Star in Frisco.

Card was one of three Texas commits at the event along with offensive linemen Logan Parr and Jake Majors.

“It was a big honor. I’ve been dreaming of it since I was little,” Card said of the Elite 11. “They gave me small tips here and there like to get my feet on target.”

He caught 69 passes for 1,137 yards and 13 touchdowns as a sophomore wide receiver but the switched positions for Lake Travis. He led the Cavaliers to the regional finals as a junior quarterback, throwing for 3,543 yards and 50 touchdowns against just four interceptions. He added 619 yards and nine touchdowns on the ground. He’ll likely arrive on campus as the highest-rated quarterback that Tom Herman has signed.

“He’s the guy that I’ve seen in this class from Texas that I’m excited about because he’s a modern quarterback,” said Barton Simmons, the 247Sports director of scouting. “His athleticism is obvious with his experience at wide receiver, but it’s his fluidity that he has inside and outside the pocket. He can throw on the run and get the ball out quickly.”

It’s talent that Simmons thinks translates to the next level as much as a big arm or a 6-5 frame.

“Those are the traits shared by the elite quarterbacks in college and pro football,” Simmons said. “It’s as much about delivery and craftiness as it is arm talent. Hudson’s athletic background gives him those instincts and ability. Given his production and athleticism, he’s one I’m pretty bullish on.”

Card is concentrating on football and recruiting. Not his own, of course, but helping Texas add to its class. He mentioned offensive tackle Chad Lindberg and running back Zachary Evans as prime targets. His proximity to Texas allows him access to Longhorns practices, meetings and recruiting events without making a long commute. Sam Ehlinger was afforded the same privilege as a Westlake senior.

“It’s a big advantage to go up there and help recruit,” Card said. “I can get around the team whenever I want.”

With Card committed, the recruiting focus at the quarterback position shifts to the 2021 class. The Longhorns would like to lock up a quarterback early in the cycle, like they did with Card in 2020 and Roschon Johnson in the 2019 class.

The only 2021 quarterback with a UT offer is Preston Stone, a five-star dual-threat prospect. Stone, who’s 6-2 and 185 pounds, is the No. 1-ranked dual-threat quarterback in the entire 2021 class. He was on campus for Texas’ junior day in February and it’s clear that he’s UT’s priority of the cycle.

“We went to a position meeting and coach (Tim) Beck preached what it means to be a Texas quarterback,” Stone said. “If you look at guys like Vince Young and Colt McCoy, they were winners. It’s a trait all great quarterbacks have in common.”

Ehlinger talked to the quarterbacks. Beck showed slides demonstrating his prowess as a quarterbacks coach and offensive coordinator. Stone plans to narrow his list to 10 schools in the spring and the Longhorns are likely to make the list.

“Tim Beck is an awesome coach with a track record back to Tommy Armstrong,” Stone said. “He’s a quarterback generator. It’s been good getting to know him.”

How sweep it is: No. 22 Texas catches fire, rallies past No. 2 LSU for series win