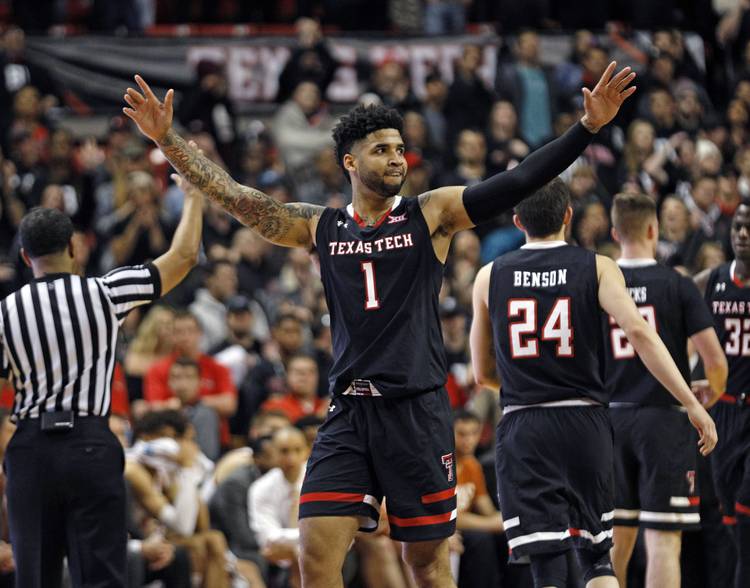 Texas Tech's Brandone Francis (1) celebrates while walking off the court during the second half of an NCAA college basketball game against Texas, Monday, March 4, 2019, in Lubbock, Texas. (AP Photo/Brad Tollefson)

LUBBOCK — The Longhorns trickled out of the locker room Monday night, looked over a table of boxed sandwiches and quietly shuffled out the door.

There wasn’t much to say after getting drubbed 70-51 by eighth-ranked Texas Tech. Not about the beatdown at United Supermarkets Arena, anyway. It was the Red Raiders’ biggest margin of victory over the Horns in 35 years and most lopsided conference loss of the season.

“Their defense was… that was probably the best defense I’ve ever played against personally,” Texas freshman Jaxson Hayes said. He had six points in 22 minutes. “They’re just in the right place at the right time all the time.”

Tech’s defense was other-worldly. The unit ranks No. 1 nationally in adjusted defensive efficiency, according to Kenpom.com. If there’s another team playing this kind of defense in Division I basketball, kindly point them out.

Texas guard Jase Febres, the red-hot bomber named the Big 12 player of the week, didn’t get off a single 3-point attempt the first 15 minutes. He finished 0-for-5 from long range and 1-for-10 overall. Tech’s plan, Febres said, was to “suffocate me.”

Guard Matt Coleman III actually got into the lane with impunity. But his left-handed floater betrayed him at times as the sophomore had 16 points on 6-of-15 shooting.

The Longhorns shot 29.6 percent for the game and went 4-for-18 from 3-point range. It was the third-worst shooting percentage in coach Shaka Smart’s four seasons at Texas. He’s now 0-4 in Lubbock, too.

“Lot of credit to Texas Tech,” Smart said. “They are one of the best, if not the best defensive teams in the country. Tonight was one of their better defensive nights.”

Dennis Rodman, once an NBA defensive mastermind himself, surely enjoyed the show. Andre Emmett, perhaps Tech’s best offensive player ever, loved it, too. He was honored at halftime along with Sheryl Swoopes and others in the newly-created Tech basketball Ring of Honor.

The sold-out crowd of 15,098 had a grand time celebrating Tech’s past while imagining a future with a championship banner. Hammering rival Texas by shooting 50 percent while foaming at the mouth on defense is merely the cherry on top.

Texas Tech (25-5, 13-4) moved one step closer to its first conference title since 1996. All that’s left is to win the regular-season finale at Iowa State on Saturday. That game is no cakewalk, either.

“I haven’t heard the word cakewalk since I was in the ABA,” Beard said, “and we played a team one time with a guy who had one leg and a guy with one eye and we were up by 40 at half. There’s no cakewalks in the Big 12.”

Texas is now two games above .500 for the season, but ESPN bracketologist Joe Lunardi said on the national broadcast that the Horns are “in” the NCAA Tournament. Just how exactly? Well, possibly as a No. 9 seed. It sure helps that there are slim pickings overall this year among the Power Five conferences.

“I don’t know,” Coleman said. “I’ve seen a couple of bracketologies. I’ve seen that we’re in as a 9 seed or a 10 seed. But I just want to respond after this loss and play well for our senior, D.O.”

Our senior? As in, singular?

The team’s other senior, guard Kerwin Roach II, remains on indefinite suspension for an undisclosed violation of team rules.

From the sound of it, Roach may not be reinstated for the TCU game. At this point, it remains unclear whether Roach, who ranks among the top 20 scorers in school history, will play for Texas again this season. He did not travel with the team on Monday.

“(Tech) experienced the senior night you want to experience,” Smart said. “We need to make sure that Dylan does as well.”

No matter who gets honored before tipoff, the Horns know they must finish the regular season on a positive note. A loss to TCU would put Texas in danger of possibly leaving the Big 12 tournament with a .500 record, something few NCAA bubble teams can get away with.

“Tough game for the whole team overall,” Febres said. “One of our worst offensive games, but we’re going to bounce back.”